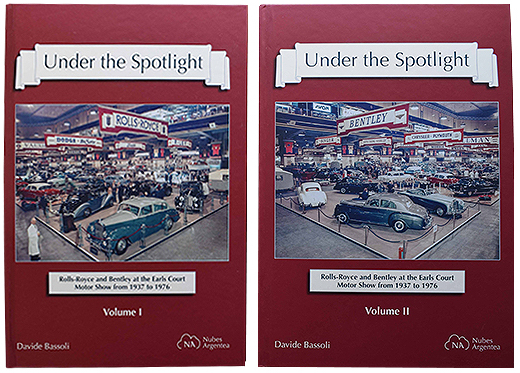 It seems inevitable that someone who researches Rolls-Royce/Bentley design and coachwork would spend a great deal of time poring over material from auto shows, a primary source for photos and specs of some of the most tricked-out cars of their day. Bassoli, who is most certainly a proper researcher and also wears the hat of long-time Registrar of the Silver Cloud/S Type Register of the marque club in Britain, has had of course plenty of need to source such material to reference in his own work. As proprietor of his own publishing house he is now able to amortize the, probably incidental, fruits of his labor and turn some 15 years of looking at auto show material into a proper book. 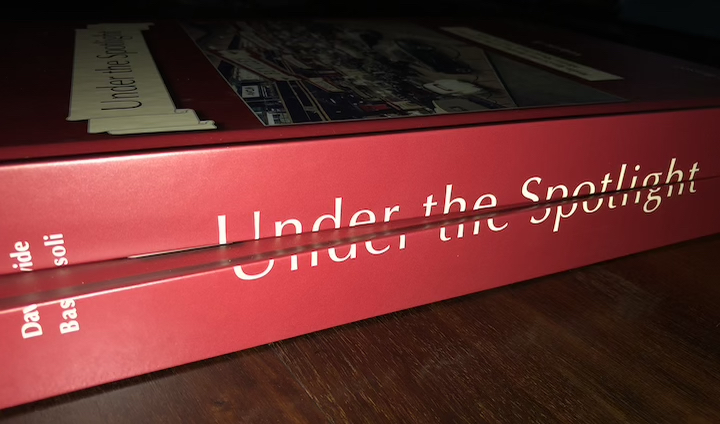 Note the clever design of the spines.

While the significance of the fact that all but six of the 633 Rolls-Royce and Bentley show cars over these years have been definitively identified by chassis number here may be lost on the general reader, Rolls-Royce/Bentley folk consider this a vital forensic tool and revel in such things. (It is not at all uncommon for arch enthusiasts to know each other’s car’s chassis numbers rather than each other’s proper names!) 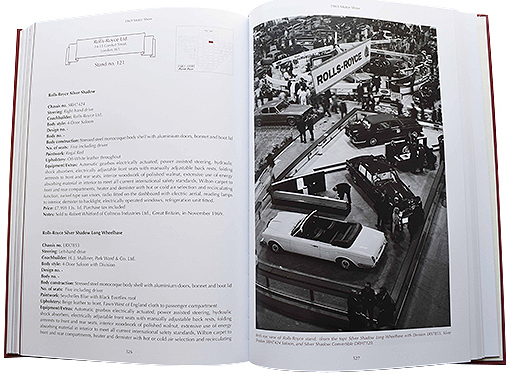 Divided into two volumes—a limited edition of 500—of pretty much even length, vol. I covers 1937–1956 (skipping the war years and their aftermath 1940–47) and vol. II 1957–76. Why end with 1976? That year the show moved to a different venue for a number of years. Moreover, coachbuilding in the sense of one-off, bespoke work had long ceased by then; in fact, with one exception (Pininfarina in 1968), the listings after 1966 no longer show coachbuilders other than Rolls-Royce, Bentley, and the one firm that had been acquired by them, H.J.M Park Ward. 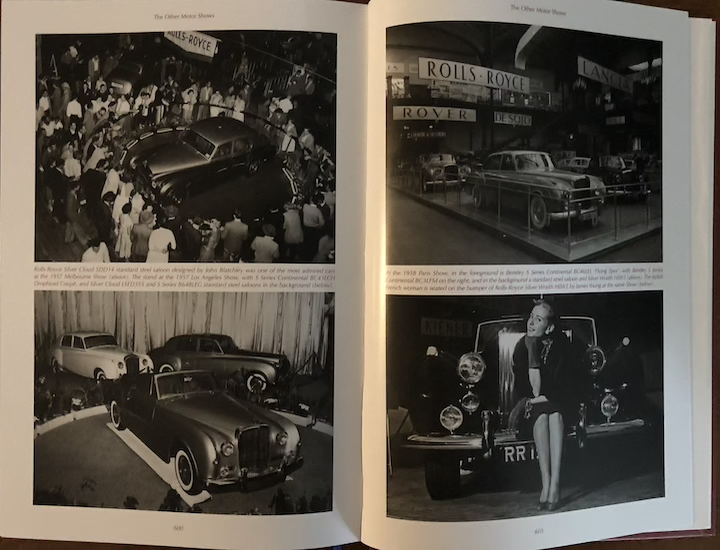 The two books are consecutively numbered and the appendices etc. in vol. II cover both. The contents is presented by year and within that by coachbuilder, first Rolls-Royce and Bentley and then any others that exhibited that year. The latter entries also state what other marques were exhibited on the respective stand which makes for interesting musings as to what all was “trending” in customers’ minds.

Each chassis is described individually (to the extent that data is known: body style, body construction, paintwork, upholstery, equipment/extras), including price if available and first owner. Each year begins with a uniform data block of key stats and a paragraph of remarks about the overall event with a closing sentence specific to Rolls-Royce/Bentley. 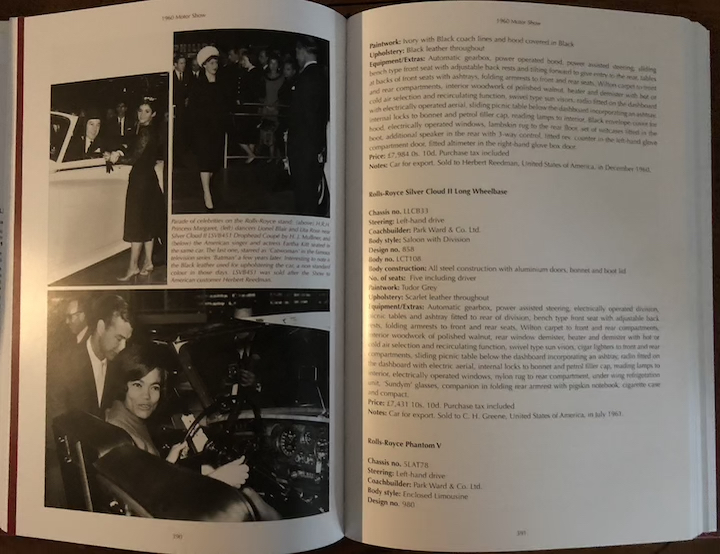 Worth explaining is that each coachbuilder’s stand is marked on an accompanying floor plan; while the basic footprint of the show hall is more or less the same each year as it is bound by the shape of the building, the assignment of stands changed every year, so, “James Young, stand #150” is likely to be different from one year to the next. Unlike the large floor plan (from 1956) that is printed on the endpapers and shows numbered stands, the small ones on the interior pages are too small to show numbers so you just have to believe that the author marked the right one. 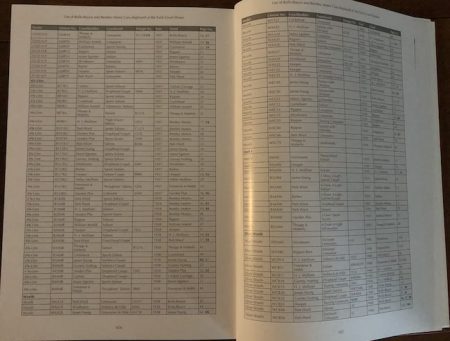 Given that many of the show cars were not run of the mill examples it is no surprise that they were photographed at the time, by the maker and/or the coachbuilders if not by third parties, and that those photos are well established in the record. As always, the devil is in the detail: not every car had surviving period photos from these sources so Bassoli had to employ considerable sleuthing to find suitable illustrations, in some cases resorting to the once famous and comprehensive Todd-White archive whose images have been deteriorating over time. (As always, a poor photo is usually better than none.) Even so, about a third of the entries have to make do without any photo. Bassoli even manages to show each year’s catalog cover (below). A multi-faceted list of all show cars is appended (above). 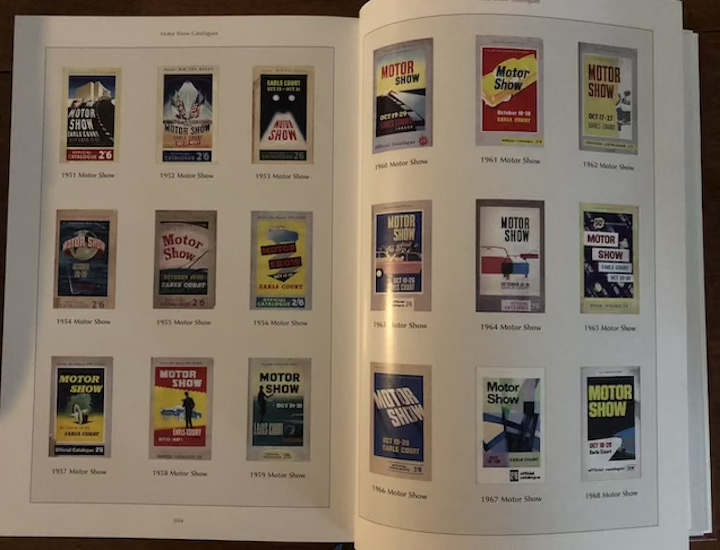 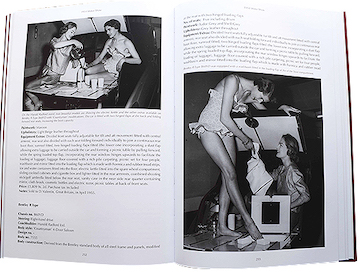 As an aside, while the presence of scantily clad young women is pretty much inseparable from the world of automobile promotion, it is almost jarring to observe that Rolls-Royce/Bentley—in societal terms the very counterpoint to needing sex to sell—played that game with only slightly more restraint than any of the others.

Bassoli considers this book a time machine, and so will anyone who attended one of these shows. 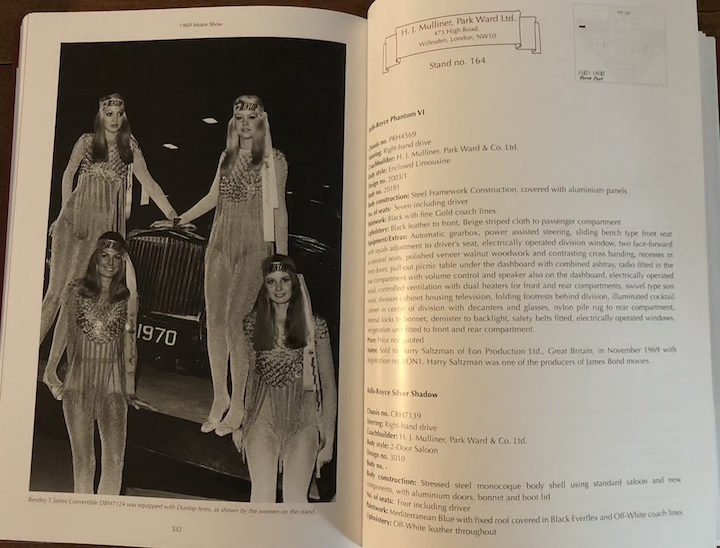 The standard edition is limited to 500 and another 15 are available in a deluxe leather-bound edition of 15 in clamshell box at €480.