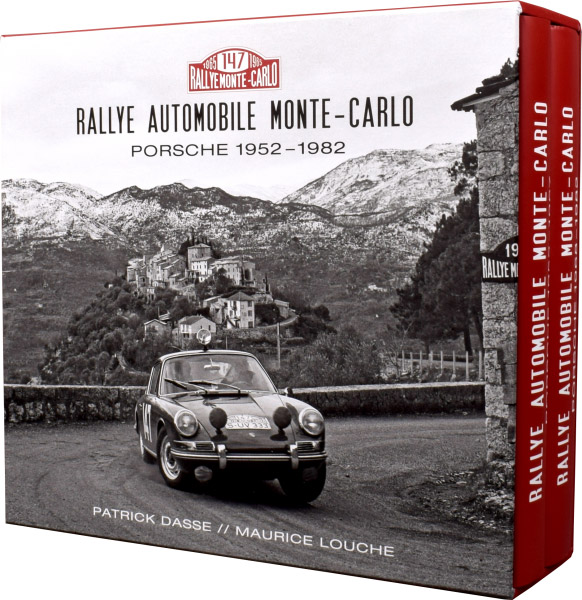 No matter the anniversaries, this book has stronger legs to stand on anyway—hundreds of largely unpublished photos and a serious stab at verification and identification of those teams that fielded Porsches. This sounds easy enough, until you actually do the cross-checking: 176 teams applied to the Automobile Club de Monaco (ACM) to enter in the period covered by volume 1 (1952–1967) but there are no definitive records of how many actually participated or how may cars retired. Only 124 Porsche teams can be verified via photographic evidence (all shown here), and of those, “only” 93 posted results. For vol. 2 (1968–1982) those numbers are 278 / 228 /116. So, it ain’t easy to parse the material.

The Monte is the oldest rally in the world and the only one to have been run continually since its beginning in 1911 (except for 14 years of downtime due to war and government interference). So why does the book begin in 1952 and end in 1982? The first date marks Porsche’s first entry of a car of theirs, the 356, and the second marks the last year Group 3 and 4 cars (replaced by N, A, and B) were allowed.

If talk of Groups and Classes and Handicaps and Overall Victory is news to you, know that this book will not really sort anything out about the rally’s staggering arbitrariness, rule changes, peculiarities, and complicated scoring system to compensate for the different length of routes participants could choose (from as nearby as Geneva—416 miles—to as far away as Athens—2353 miles). All these things and more do pop up in the scant narrative (which, being trilingual, really is exceedingly short already) but the authors probably assume you already know the meta story or have other resources to refer to for a fuller picture.

James Bondian machine guns? Nope, these devices minimize snow build-up. In this case, neither the caption nor the text say anything about this contraption. On the other hand, the narrative for this year does devote a good half page to a MacGuyver-worthy field modification to bring the Walter Loeffler 356 into conformance with the regs. Can’t have it all…

Many of the photos are of people standing around, alongside the course or cars; and cars in parcs ferme or carving up the snow. Partly this is in the nature of any rally, partly it is due to the time of year—winter. In most cases, the photo captions give you only car number, driver/s, car model. There’s a lot more to discover in most photos—bystanders, equipment, locations etc. etc.—but you’re on your own for that.

Each year begins with a brief stat sheet (starting locations, number of starters/classes, route, overall winner) and ends with a list of the Porsche teams that finished; these two bits have column headings etc. only in French but are easy enough to decipher. One or two pages of text in each language summarizes the event; the focus is on rule changes and performance of the Porsche cars.

It takes discipline to keep the text tight so it is all the more delightful when the authors allow on occasion room for the odd bit of trivia. Example: the aforementioned Porsche win in 1968 came about after frontrunner Larrousse found his progress impeded by “spectators who had piled snow onto the road with the intention of making the stretch more ‘spectacular’”, causing Larrousse’s Alpine to skid off the road!

Each volume has a short section of rally posters at the end, and vol. 1 has one short section each of pre-rally testing (below) and post-rally shots of cars at rest.

Herbert Linge doing pre-1965 testing—not terribly exciting to look at but 2 pages later the car is in the ditch.

This book, then, is kind of for connoisseurs who can recognize the photographic riches (printed in landscape format) and appreciate how hard it must have been to ferret out all this material. The book is not at all cheap but there’s really nothing comparable so in that regard, price is not a practical criteria. And as we always say about photo books: you’re never really done with them—you’ll pick them up often, and every time you see something you hadn’t noticed before.

It’s worth knowing that author Dasse presides over his own publishing house, meaning he didn’t have to twist too many arms to get this project greenlighted. Also, this book falls under the “Edition Porsche Museum” umbrella so the inexhaustible Porsche Archive opened home and hearth and turned up some gems, as did a large number of other photo sources large and small (not least co-author Maurice Louche from France who deals in books and photos and has authored a long string of motorsports titles).

While not relevant to this review readers should know that the same year this book came out, Dasse published a stack of Alfa Romeo titles that, just like this one, manage to introduce into the record a large number of never before published photos.

Twice Around the Clock, The Yanks at Le Mans »
« Ordeal by Ice: Ships of the Antarctic