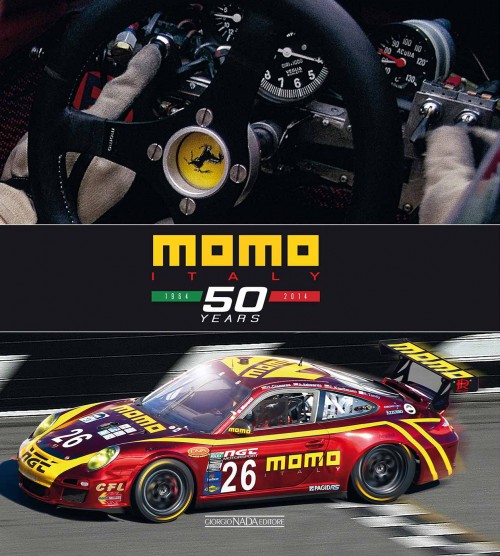 (Italian, English) To car people MOMO means wheels—as in steering and road—and all manner of racing paraphernalia and luxury car accessories. To design aficionados it may mean Momodesign, a now independent and international brand with its own identity and philosophy but whose lifestyle accessories ranging from wristwatches and glasses to ceramics and fragrances embody high style and innovative materials.

Company founder Gianpiero Moretti (1940–2012) contributed the first MO to the firm’s name. The second one is nowadays said to be derived from Monza, home to its famous Autodromo but more specifically because there, in the old pits, was once situated the first proper shop selling the steering wheels that then amateur racer and Poli Sci student Moretti had dreamt up in the bedroom of his childhood home. But before that, it was Moretti’s first business partner, the engineer Moraja, who was the second MO. 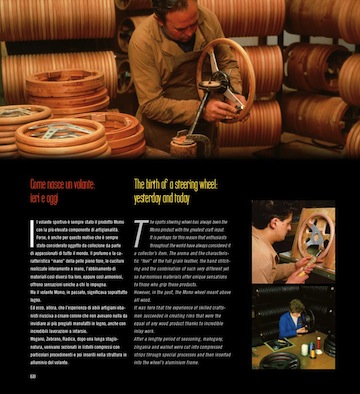 Necessity being the mother of invention, it was Moretti’s dissatisfaction with the existing steering wheels in his race cars that spurned him on to come up with a better mousetrap. In other words, without those wheels there would be no Momo—which means it doesn’t make a good impression that the author, a professional motorsports journalist, introduces ambiguity in this matter right at the start of the book. He lists size/circumference, weight, and esthetics as the key areas Moretti found wanting—only to have a few pages later Marco Cattaneo, the later head of Momo’s Centro Stile which would morph into Momodesign, specifically eliminate the first item as a factor, arguing that the older cars without power steering would have been undrivable without large, beefy steering wheels and that it was Moretti’s use of leather and his understanding of ergonomics that made his wheels different, necessary, and successful. 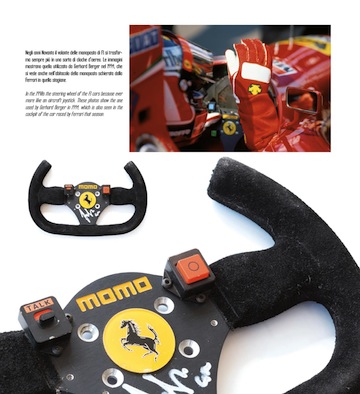 The reason to be vigilant about even seemingly small matters is that anniversary books like this too often trip up, playing it fast and loose with nuanced historical reportage and reconciliation of sources and minutia in favor of, well, cheerleading. This book certainly strays into the latter but it does record the basic facts of life and it certainly is very strong on the visual end. If you’ve ever seen the splashy Momo catalogs you’ll find a similar style here.

What the book is definitely not is a fully fleshed out business history. Momo has gone through a number of ownership changes, each affecting the firm’s products and philosophy. Those who only know the products will probably be surprised to learn that Moretti competently drove serious cars at serious races and over quite a long time span. This sort of street cred made it easier to network within the racing community and the firm was able to go from supplying bits to friends and family to sponsoring entire teams and even becoming the official supplier to entire race series. 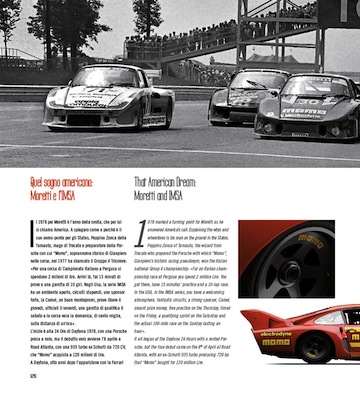 Each chapter is introduced with some narrative, presumably by Donnini and quite a bit of text is in the form of interviews with people in the Momo world including Moretti’s son Matteo. British racer John Surtees wrote the Foreword and it is no exaggeration to say that Momo parts helped his racing which ultimately led to winning the 1964 World Championship. Readers new to this long-standing and important publisher need to be cautioned that a high tolerance for typos is required.

There’s not a form of racing in the last half century where you won’t see Momo gear or signage but if that leaves you unmoved consider that any road car can be, deserves to be improved functionally (think, for instance, collapsible hub on steering wheels) and esthetically with Momo bits and so a book like this is a fine way of paying tribute—and seeing what you’re missing!