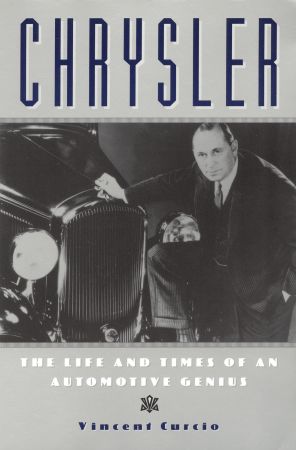 This book is so much more than its title suggests—if you only read, and remember, the chapters summarizing general automotive history you will hold your own in any intelligent discussion about the auto industry.

“A hundred and twenty million years ago, before time began . . .” are the first words in chapter 1. For economy’s sake Curcio fast-forwards within a few sentences to the 1500s and thus manages to confine this enormously detailed account to 663 fluidly written pages. As a veteran theatrical manager/producer Curcio is obviously cognizant of the benefits of being able to locate his subject in space and time by creating this wide an arc. It allows him to show how the world and the man influenced each other—long before and long after the 65 years during which they intersected.

Part 1 ambles along leisurely, zeroing in on the subject through family background, formative years, Chrysler’s professional training on the railroads, and subsequent biographical moments. Part 2 sets an altogether different pace and serious thought is invited to accompany the author on a tour of things historical and mechanical. Chrysler, by the way, despite being the book’s focal point, is largely absent from these 200-odd pages. With undeniable competence and enviable organizational and writing skill Curcio dispenses in these chapters a myriad of data points. From Hero of Alexandria’s self-propelled steam vehicle of 130 B.C.E. to the pivotal discoveries of the 1700s, from the use of assembly lines in the manufacture of Venetian warships to Singer’s sewing machine experiment rewriting the book on advertising and marketing to the popular and persistent misunderstandings of the role of the legendary McCormick Reaper. The latter example convincingly exemplifies Curcio’s admirable attention to scholarship.

Throughout his book, and backed up by extensive quotes, he manages to pare down the innumerable urban myths (“Henry Ford invented mass production!”) that have attached themselves to the larger-than-life figures and events in the history of the automobile.

The remainder of the book examines the enormity of Walter Perry Chrysler’s vision. The man who loved machines; understood engineering and quality and price; who had the managerial and people skills to consolidate and reinvent an industry, is here fleshed out like never before.

Rigorous research, full access to company and personal records, and a sympathetic biographer have produced a most impressive book. (Source notes, index)