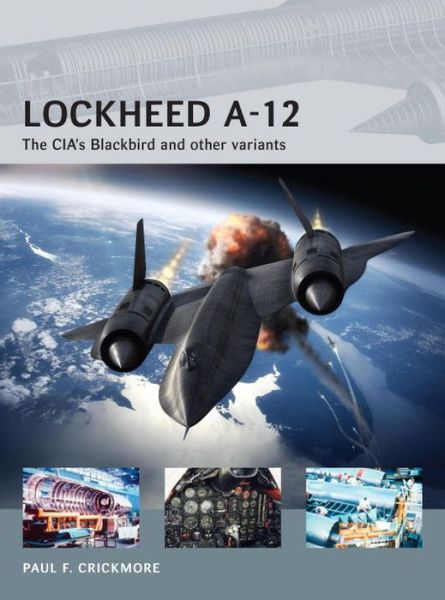 Imagine how far it is to travel 70 miles/110 km. An A-12 can capture that entire area on one single photo. You’d need to go really high up to see that much real estate with one glimpse (see example below). But think about it—what would be the point of having such a macro photo if you can’t get micro detail? The A-12’s cameras were so sophisticated that, back on the ground, a photo analyst could take a 27 x 6 inch film frame shot from 80,000 ft of altitude and zoom in and in and in, all the way to a ground resolution of 2 to 3 feet! In the 1950s! By an aircraft that in the 1 second it takes you to bend down to tie your shoelaces to run a 3-minute mile could cover on full boil 1.8 miles. Not impressed? Read the book!!

When people think of the Blackbirds they generally think of the SR-71, but this book looks at its forerunner, the A-12 that was operated by the CIA (there’s also an Air Force version, the YF-12 interceptor which is also covered here as well as the M-21/D-21).

This small and unassuming book proves that nuggets can be found in unexpected places—too bad it doesn’t trumpet that it does in big, bold letters! What a shame it would be if Blackbird experts passed this book by, the strength of its author’s name notwithstanding.

Now, you do have be a bit of an expert—more in the area of history than aircraft geekery—to notice the new bits, but if you are and if you do, you’ll recognize their relevance to advancing the body of knowledge. One of them has to do with the location shown on the cover. Do you know your planet’s layout well enough to guess where we are? (The place is still in the news today, more than fifty years later, and for much the same reasons). To cut to the chase, this book is the first to show in print for public consumption reconnaissance photos of one of the Black Shield missions over North Korea in 1968, BX6847 which was the first of three sorties to find the captured USS Pueblo “research” ship. This isn’t the book to tell that nail biter of a story in detail, but it illustrates the unique intelligence-gathering capabilities of the A-12 whose speed and service ceiling are unmatched even today by any production aircraft, belying its “Oxcart” moniker.

While those photos will be new to anyone but intelligence insiders the next item is not necessarily “new” in the sense of “previously undisclosed” but the clarity and specificity of the statements will surely be read, even if not especially by Blackbird folks, as sharpening the point: that the Mach 3 reconnaissance program was slated for termination in 1968 and Lockheed ordered to destroy all tooling. Instead, the first SR-71 went operational, with a different mission profile (to better fit a different set of geopolitical circumstances) and therefore different capabilities.

So, this small 64-page book manages to cover all of this in at least some detail. Since Crickmore absolutely owns this subject you can safely assume that it is competently pared down to what matters and what is peripheral. As to the latter, there is at least one item that has not yet been recorded properly in print (and is mentioned in the book barely in passing): the A-12 was built in Burbank, California but staged out of Area 51 in Nevada—but how did it get there? In parts, by truck, on custom trailers in custom boxes that were 100 ft long and 30 ft wide, on three-day road trips. If you have an imagination, engage it now. Convoys got bogged down in the mud, roads had to be widened, tress cut down, secrecy maintained—there are a thousand stories here, waiting to be told.

A final thing that sets this book apart are the illustrations by UK digital aviation artist Adam Tooby. (He even creates box art for model aircraft kits.) In addition to the fully fleshed-out action scenes that are a hallmark of this publisher’s books there are several side and three-views, including a fold-out annotated exploded view on the inside back cover.

This book will make you want to know more; it is so cheap that you could easily plunk down another $12.95 and buy yourself a CD-ROM from the Paperless Archives containing 2,347 pages of CIA memos, reports, correspondences and manuals covering A-12 development, testing, and missions.

All the Songs, The Story Behind Every BEATLES Release »
« The Martin Ukulele