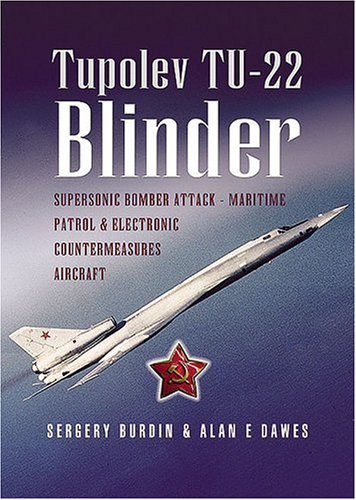 “The subject of this book was once one of the most feared and respected, albeit imperfectly understood, Soviet Air Force adversary facing NATO in the darkest period of the Cold War. In fact, there has perhaps never been a military aircraft in recent history which has given rise to so many ‘legends’ and so much speculative analysis.”

This first of the Soviet supersonic bombers to go into production wasn’t only feared by the West for its capabilities, real or alleged, but also by—its pilots! Occasionally crews actually refused to fly it! Well, this didn’t happen often, but the Tu-22’s loss rate was so high that it got the moniker “Man eater”—a far less complimentary nickname than the official one, “shilo,” the Russian word for awl because of its needle-like shape.

The West too went through several names before finally settling on the NATO reporting name Blinder. An earlier and oddly unmilitaristic proposal had been Beauty and the author of this book would have had no squabble with that because he considers the Tu-22 “the most graceful-looking combat aircraft ever built.” In flight it certainly does look elegant, although one of the factors that made it fly well was also the very reason it was hard to put back on the ground: speed. At landing, the Tu-22 came in so fast, because of the wing shape, that it was hard to slow down, especially since the pilot didn’t see a whole lot below him. And when it did fly supersonic, the skin could get so hot that flight control mechanisms would get so deformed that the aircraft became almost uncontrollable.

Much of the aircraft’s bad press came apparently from a large number of pilots who, however competent on other types, simply couldn’t get the hang of the Tu-22. This book aims to “provide the opportunity to take a more reasoned look at this fascinating aircraft . . . neither embellishing its merits, nor resorting to unjustified criticism of its failings,” and it succeeds. When it was first published, in 2006, it was pretty much the only in-depth treatment in book form, not counting a far less substantial 96-page paperback (1999, ISBN 978-1857800654) that its authors Yefim Gordon and Vladimir Rigmant wouldn’t completely overhaul until 2012. So, the Burdin/Dawes effort in its day significantly advanced the state of the art by drawing on previously classified Soviet Ministry of Defence archive material and also great support from aircraft maker Tupolev and personnel involved in building and operating the Tu-22.

Even then and still today the book stands out for its superlative writing. That it is a joy to read also in English is thanks to co-author Alan Dawes, a Brit who wrote for Air Forces Monthly and AIR International magazines and had already translated two other Russian aviation books and written several of his own. So mindful is he of the nuances of language that, for instance, in transcripts of interviews he strives to preserve the original speaker’s “register and sentence length”—not so easy when the source language has a different syntax than the target language!

If there is a shortcoming it is not the authors’ doing but the publisher’s design parameters. All their books are underwhelming when it comes to quantity, quality, and size of illustrations, none of which are helped by the books’ smallish size. Maps and diagrams in particular border on the illegible, but, since the legends are in Cyrillic, this is a somewhat academic matter. But there is one thing this publisher almost always gets right: a proper Index.

The book begins by setting forth the tactical reasons that required the Tu-16 to be replaced, explains the design brief for the Tu-22, and discusses development and testing of the airframe and specific systems. The Tu-22 existed in a number of variants and their nomenclature alone complicates the story. This is not helped by the fact that the Soviets divided the type into 20 variants numbered A to U whereas NATO classified it into only four, A to D. If you’ve ever heard of a Tu-22M, realize that this is a completely separate aircraft, connected to any of the other Tu-22s only inasmuch as it continued and expanded their role and for a good portion of its life existed alongside them.

The many quotes, especially from flight crews, liven things up. In view of the opening remarks it is no surprise that an entire chapter is devoted to Emergency Escape and Life Support Systems and another to Incidents and Write-Offs. Deployments are discussed too. The only Soviet combat use occurred in 1988 during the war in Afghanistan so it is the Iraqi and Libyan air forces that contribute more to that part of the story, or could have if they had exploited the Tu-22’s offensive capabilities as intended. Good thing for their neighbors that they didn’t; while peripheral to the overall story, there are some very interesting comments in this chapter about the different attitudes toward work, discipline, and competence among Arab personnel.

An Appendix enumerates several pages of stats so comprehensive that you’ll probably end up consulting them any time you read Tu-22 material elsewhere.