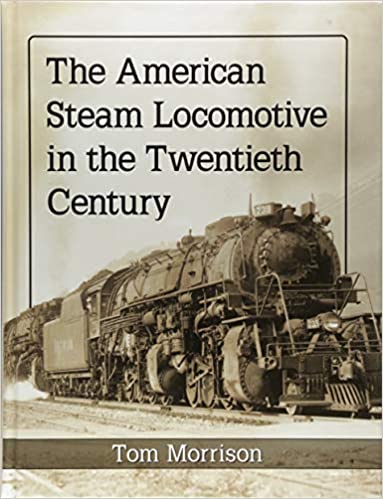 “Between 1900 and 1950 the Americans built the biggest and most powerful steam locomotives on the face of the earth and ran them to the limits of their power. The biggest of them were four times the size of their European equivalents—even though running on the same track gauge. The last to be built, in the 1940s, were five times as big and eight times as powerful as their predecessors fifty years earlier.”

With the turn of each page—and there are a considerable number of them, 636 to be exact—your commentator grew more enamored of and awed by what author Tom Morrison achieved with his The American Steam Locomotive in the Twentieth Century.

Steam engines existed—and were performing useful work—some 150 years before the science and principles governing them, called thermodynamics, were conceived. Discovering those principles and adapting them to the on-going development of the steam locomotive fill the pages of this book. As is graphically shown and explained, thermodynamics did not yield its complex principles easily or quickly. In fact it took many able engineers of the time several decades and a great deal of trial and error before thermodynamic principles were clearly understood and could then be applied.

A single word appropriately and correctly describes this book: comprehensive

What author Tom Morrison set out to do was create the book he had always wanted to find since his very earliest fascination with the subject—and had never found—“a real, thorough-going, grimy, gritty history of those gigantic locomotives, the people who built and operated them…” and all of it in great detail especially the construction and operation. So he took up the gauntlet himself and in the opinion of this commentator, he masterfully achieved his goal. 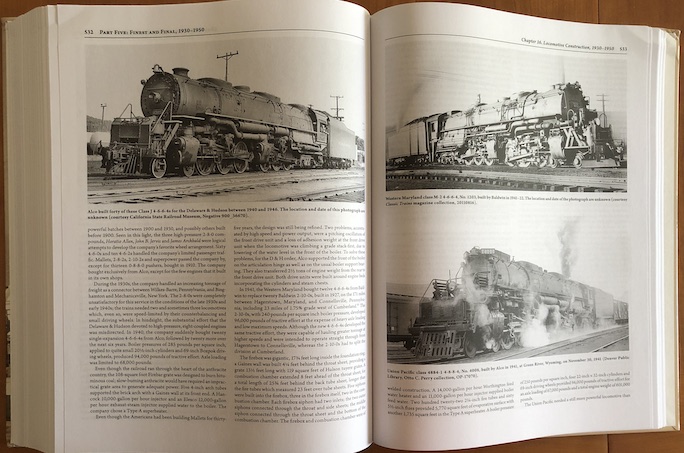 Putting all of that information between a single volume’s covers, required publisher McFarland to use 636 pages to present the text that is illustrated with 455 well-captioned black-and-white images and augmented with 130 charts, graphs and drawings and concludes with 50 pages of appendices and chapter end notes.

Tackling reading this book is not for the casual reader for it is fact dense. In order to cram all the information onto even 600+ pages, McFarland employed what is often described as “mouse type” and in the cases of quoted citations it uses “mini-mouse”-sized type.

As you read you’ll discover no fact, no aspect, too unimportant to be omitted; from the “philosophies” of differing types and construction of boilers and of fireboxes, to gearing and axles and how and such were configured differently on the various locomotives, to rail and roadbed construction including substructures. It is railroads and railroading, including equipment, people, places, and facilities 1895–1950 that Morrison examines microscopically and carefully and clearly explains what he found and learned to us, his book’s readers. 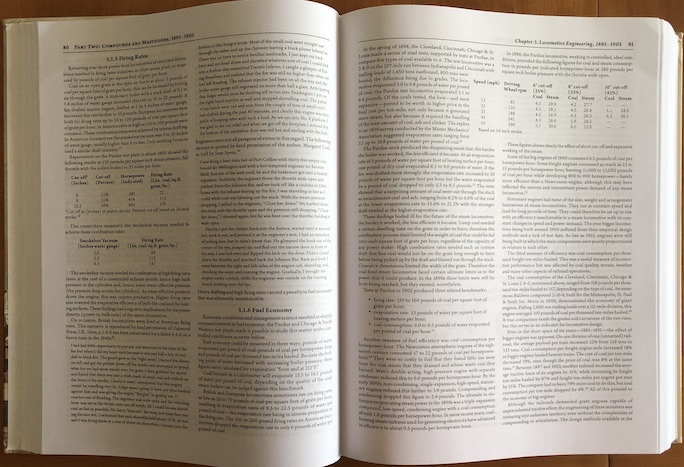 Yes, there’s math. You didn’t think being a fireman is easy, eh?
From p. 80: “…Coal in an open grate in the open air burns at about 3 pounds of coal per square foot of grate per hour; this can be increased by forcing air through the grate. A stationary boiler with a stack draft of 0.1 to 1.4 inches of water gauge increased this rate to 10 to 20 pounds. A fan-drafted marine engine…”

The reality—for any and all of us—the brain can only absorb and retain a minor percentage of all that’s between this book’s covers—no matter how interested you, the reader, are. That’s when the book’s brilliant organization comes into play. First Morrison organized by chronology for, after all, that’s how technological advances unfolded with a new approach building upon, hoping to improve on an existing way of doing or constructing. 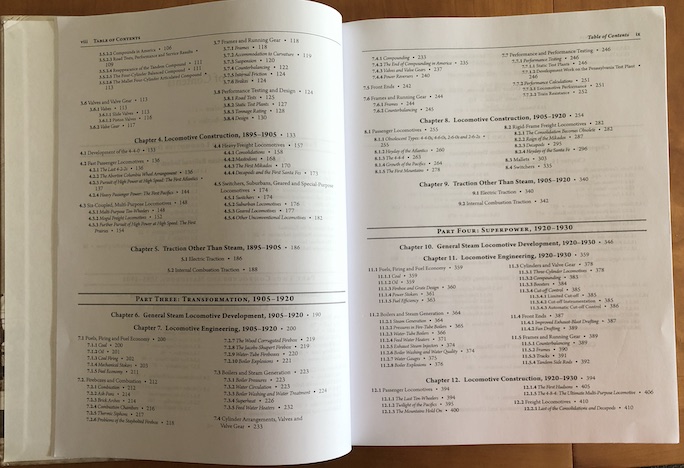 If you’re not finding something in this book it’s not going to be the fault of the Table of Contents….

For each era as Morrison groups the years—1895-1905, ’05-1920, ’20-1930, and 1930 into and beyond the 1950s—he considers his topic from three aspects: engineering, construction, and alternate modes of traction. Then within each segment there is a further organizational breakdown so the table of contents resembles the manner in which automobile manufacturers organize and number shop manuals to correspond with parts number groups etc. And if the detailed Table of Contents doesn’t guide you to what you are seeking, the book is fully indexed, although the page layout of at least one index entry made reading it a bit challenging as you’ll read next.

During the time your commentator was reading this book the one and only operational Big Boy locomotive was on tour across the US under its own steam. And one of its stops was in the town where your commentator resides. I wasn’t going to miss that!

Originally 25 Big Boy locomotives were constructed of which seven are extant. I’ve stood beside two; one in Denver’s Forney Museum and the other in St. Louis’ Museum of Transportation. But, as said, there is only one fully restored and operated, albeit converted from coal to oil-fired which makes the engineer’s life somewhat easier for at stops the burner can be dialed back rather than having to keep a fire stoked and pressure up. Not to mention that the consist (in railroading this refers to the train from head to tail) would have had to carry all of the coal it would have needed to make the trip as well as a car or cars in which to deposit the coal ash as no mainline stations anywhere any longer have such fuel or facilities on hand. 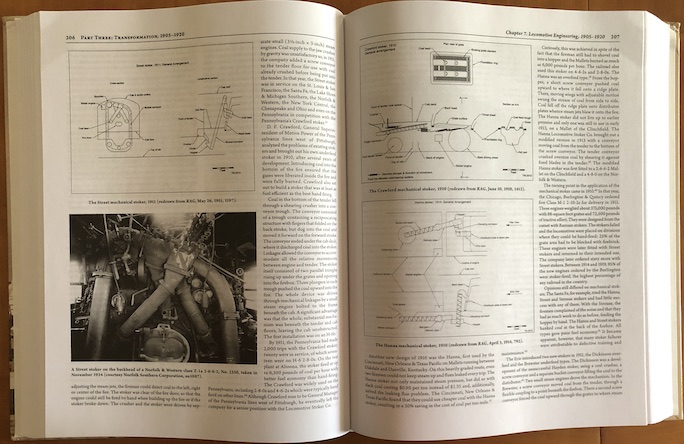 It should be no surprise that that experience sent me back to the pages of Morrison’s book to read again what he’d had to say about these 4-8-8-4, 1.2 million pound behemoths that were absolutely “the largest single-expansion steam engines ever built.” In doing so I encountered a bit of a challenge. Engines in the Index are organized and categorized by wheel arrangements. But finding 4-8-8-4 in the four columns of numbers of this entry took a bit of improvisation because the numbers all melded together. Boldface is used for pages containing illustrations, otherwise in the “mini-mouse” type it is a real challenge to pick wheel arrangement numbers out of the sea of page numbers. It would have been helpful if italics or underlining (my choice) had been used beneath the wheel arrangement digits.

With page numbers found it was possible to read again of the engines Morrison called “engineering triumphs” for their ability to run at a continuous 70 mph yet top that speed by an additional 10 mph on sections of the track where it was safe to do so “without derailing itself or destroying the track.” Further Morrison notes that in half a century of developing steam locomotives in the US (longer if you take European building and operation of same into account and even longer if it’s merely the harnessing of steam power being discussed) “engineers were still discovering new truths about steam distribution…[with] Big Boy…comprehensively redesigned from first principles…The design was simplified, there being no compounding, booster or feed water heater; Baker valve gear and limited cut-off were likewise ideas that had run their course. The result was one of the ultimate developments of American steam power.” As you can imagine, it was dramatic and wonderful to see that Big Boy traveling the rails under its own unassisted power.

If you’ve even a modicum of interest in steam locomotives and their concomitant history, do not deny yourself a copy of this marvelous book.

Posted Under: Trains | Author: Helen Hutchings | No comments yet