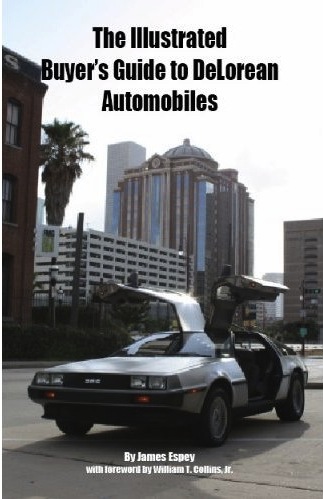 When is the last time you saw a DeLorean? Exactly. That’s why you need this book if you’re in the market for one, or even if you own one already but have no one to compare notes with. From towing (something the company was so concerned with that they issued a Transporters Hand Book) to optional equipment to specialty car insurance, this book takes you through all aspects of DeLorean acquisition and ownership.

Of the handful of DeLorean books ever written, most concern themselves with the man and not the car. The story of John DeLorean’s professional and private life is, of course, rife with originality and drama, and, ultimately, catastrophe but that doesn’t help the prospective buyer understand the car. If there were a Top 10 list of “Most Misunderstood Cars” the DeLorean would be on it, both in terms of its place in the automotive landscape and technical/production features. This book not only advances the body of knowledge in regard to the latter, it is written by someone who is uniquely qualified to do it.

Since buying his first one in 1995, James “Drive Stainless!” Espey has devoted much energy to compiling and disseminating data. He created and moderated the DeLorean Mailing List, was the first Internet Director for the DeLorean Owners Association, and created an Owner’s Directory and a Production Chronology etc. No wonder that in 1999 the “new” DeLorean company—founded in 1995 by a former DMC exec to acquire the defunct name and remaining NOS parts with an eye towards building “continuation cars” with existing VINs and servicing the old cars—hired Espey as Marketing Director. Presently he is a VP of the firm that does business as DeLorean Motor Company (Texas).

Espey, then, is the right man for this book. But it is not at all uncommon for the expert steeped in detail to forget that, for the sake of some of the very people he is writing for—newcomers to the marque—it would be helpful to start with the basic facts of life. Why, for instance, start (p. 7) with the micro detail that the optional automatic tranny was available at $650 without putting it in the context of the base price of the car (ca. $25000 which would be about $65K in 2012 dollars) that is nowhere mentioned but only shown in a photo of a window sticker (p. 19)? Or why not impress the reader right out of the gate with the relative rarity of the car instead of waiting until p. 111 to delve into production years (1981–82, with some cars re-VIN’d as 1983) and numbers (Espey estimates 8987, with 6500+ still extant)?

This 9 x 6″ softcover is small and light enough to fit into a coat pocket when you hit the road to examine your dream car. It is, much like the original car in its day, not cheap—in both cases this is a function of volume (low) and how it’s made (self-published)—but the information it contains may well be priceless if it saves you from buying the wrong car!

Almost every component and assembly described is also shown in detail photos (of several cars) specifically taken for this book, accompanied with the occasional drawing or schematic and even build sheets and photos of the new company. As one would expect, the presentation takes a methodical tour of the car, from exterior to interior, engine, trunk, frame etc. Truly everything you ought to know and prepare for is covered in sufficient detail; problems and cures are called out, always with an eye on parts availability. Items revisited in separate sections of the book are properly cross-referenced to each other.

The Foreword, incidentally, is by DMC-12 chief engineer and designer William T. Collins (ex Pontiac chief engineer). Included are a list of VINs of “important” cars, VIN decoder, and a mini synopsis of each of the 11 DeLorean books.

If you already are at home in the DeLorean world you may recall that some years ago (2007) there was talk of a book project tentatively titled Living the Dream for which Espey was soliciting material from former employees, dealers, and suppliers. All went quiet but it turns out he is still working on this book and envisions a release in late 2013.

Speaking of the future . . . who doesn’t remember the DMC-12 featured in the Back to the Future movies? That car achieved time travel by means of a contraption called a “flux capacitor” that required 1.21 gigawatts of electrical power to create, if you trust the number-crunchers, a momentary burst of 1.6 million horsepower. A more realistic version is actually in the works: in partnership with battery maker Flux Power and Epic Electric Vehicles, DMC has developed fully engineered and running prototypes of original DeLorean bodies/chassis powered solely by battery packs! 260 hp, 0–60 in 4.9 secs, 125 mph top speed, 100-mile city range. Marty McFly would be impressed!

Engines of Change: A History of the American Dream in Fifteen Cars »
« Grand Delusions, The Cosmic Career of John DeLorean