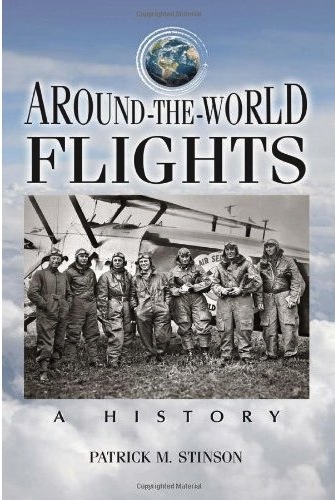 Gallant efforts that fall short can prove to be of more enduring inspiration than a successful outcome might have been.

It’s all relative. To an SR-71 Blackbird pilot who’s clocked 2000+ mph zipping around the globe in about 11 hours the 530-odd mph your average commercial jet achieves are boringly slow. Only 55 years before the fastest recorded SR-71 flight, pilots on the first around-the-world challenge (1921) were given 100 days to make the trip.

That contest ended up being cancelled, which leads us to the quote above. As true, and obvious, as it is, the reality is that on the subject of around-the-world flights few of the failures (with the exception of Amelia Earhart whose unexplained 1937 disappearance on a circumnavigational flight of the globe still today occupies the public’s imagination) have been recorded in any detail and not even all of the successes. This sad state of affairs is what the author discovered when he began to look into the subject.

Stinson’s particular point of entry happened to be a flight that took place the year he was born, 1949 (Lucky Lady II, a B-50 bomber). This flight did make the history books because, thanks to in-flight refueling, it was the first-ever nonstop circumnavigation. Often we remark here that the most worthwhile books are written by people who take an interest in a topic, proceed to read up on it—only to discover there is nothing of substance to read because no one has written it yet. Stinson, being the curious sort (he works for PBS and contributes to aviation magazines), took it upon himself to spare others that disappointment and put pen to paper.

His research began in 1986 and led him to a plethora of archival resources across the globe—from NASA to reunion associations. Using World War I, that great catalyst for technological advances, as his point of departure, Stinson briefly summarizes key activities in the field of aviation before shifting to the aforementioned 1921 challenge. It would take another three years before anyone actually accomplished the feat, in 1924, a busy year in which 10 attempts had already failed before a US team flying brand-new Douglas World Cruiser biplanes successfully flew from/to Seattle, Washington. It took 175 days—with a flying time of over 371 hours—and the help of 28 nations that provided logistical support along the way—and they lost two of their four planes.

A story, then, full of toil and tribulation. Stinson describes the various efforts, all the way to 2009. What the Table of Contents lacks in specificity the Index more than makes up. If you already know a bit about the subject you’ll probably want to start there. The text consists mostly of lively narrative, augmented with many quotes and excerpts from contemporary sources such as letters and news clippings.

It is one of Stinson’s goals to enter into the record the deeds of those who are so often the unlauded backbone of complex endeavors: the support crews. The book covers civilian and military efforts (including airships) and it is no surprise that it is the military flights that are the most extensively documented in terms of aircraft data and crew lists, even minutia such as call signs, and some of these are reproduced here.

Lest there be unrealistic expectations: the book does not, cannot, list every flight—there are too many! Thus light aircraft (modern-era Piper Cub class) are covered only in passing and only if they represent a first-ever achievement, and, for instance, the Blackbird referred to above is not mentioned at all.

There are only 12 photos, none of which newer than 1965, but they are as well reproduced as the soft paper allows. While the text is full of data points there is no one table that gathers the relevant parameters (cf. speed, distance, time, stops, propulsion) in a neatly organized form so as to quickly convey the ever expanding envelope. Chapter Notes at the back of the book list sources and there is a Bibliography.

Anyone who has the spare change to buy a $200,000 ticket can book right now a trip into space—from whence to return in a matter of minutes. Wondrous times, thanks to the early pioneers you read about here.