Breadvan – A Ferrari To Beat The GTO 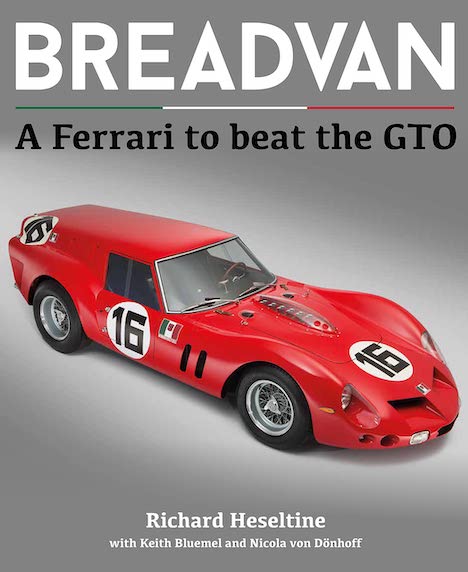 “It is also worth remembering that its frontline career was a brief one. It showed a commendable turn of speed, that’s for sure, but only so long as it stayed together. However, there is so much more to the narrative than just race results. The Breadvan is remembered precisely because of its backstory, even if it has been embroidered somewhat over time. Perhaps even because it has.”

Famous as it became, the history of this uniquely modified 250GT Short Wheelbase with the peculiar name has been plagued with inconsistencies, even among principals, and outright untruths from its earliest days.

The last time a properly serious book by properly serious authors about the 1961 car they rightly called “The Most Recognizable Ferrari in the World” came out, 2010, we wrote that its authors had knocked on all the right doors—their book consisted in the main of interviews, reproduced Q & A style—and that it was not likely anyone would have the need or urge to revisit the subject again. Well, 12 years later, UK author Heseltine seems to have one or the other, although he doesn’t say why. He is not given to inflicting pointless books upon the world so he must have felt a stir in the Force. 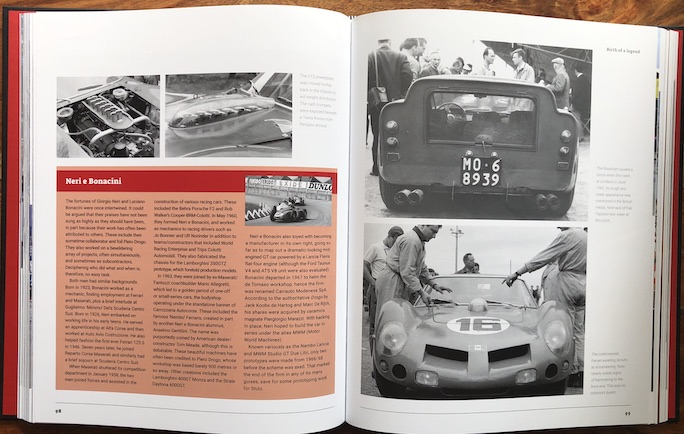 Easy to see how the Breadvan got its nickname, right? “A potato-harvesting machine at one end and a space-rocket at the other.” This photo also shows one of the many sidebars throughout the book that introduce people related to the story, here coachbuilder Neri.

If nothing else, the Heseltine book is vastly more buttoned up, with more background and more connective tissue (comparing the indeces of the two books is telling). He does hint that new information has come to light since. On the one hand, he cryptically classifies it as “small but seemingly insignificant finds” (the use of the word “but” is so ambiguous!) but on the other hand considered it compelling enough to justify the additional effort of two rewrites! Whatever that news was, it is not called out as such in the narrative. For the newbie this is of no consequence because he won’t have the interference of old or half-forgotten memories that will drive anyone else to look things up in their other books. 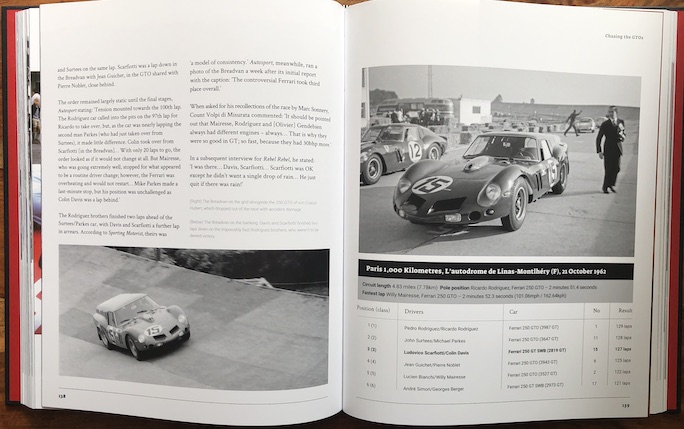 To have begun the review with references to the 2010 book is relevant because Heseltine considers it the “starting point” for his book. He “mined it for quotes” and credits its lead author (Sonnery) as a consultant while taking on co-author Keith Bluemel in the same role. From which follows that all concerned must be of the opinion that their books should play well together. In other words, go find thee the Sonnery/Bluemel book! If you don’t already have it be prepared to part with some serious money. 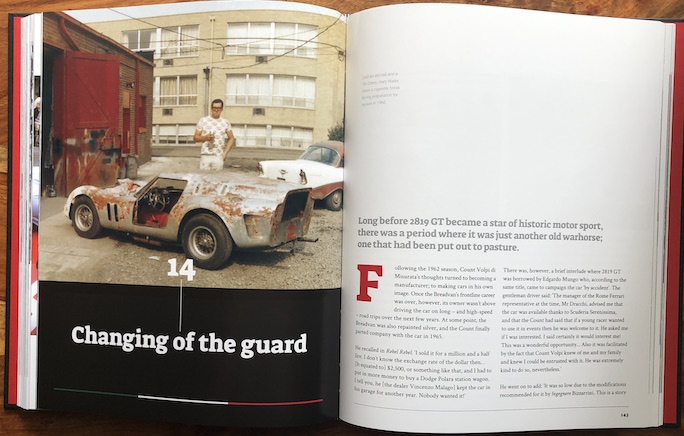 Either the guy is very tall or the car very low. It’s more the latter. Random information: The guy, Gary Wales, was very much into tall tales: his business cards used to sport the honorific “Prince of Wales” replete with coat of arms. But he is a good egg who makes the stodgy collector car world more colorful with such utterly outrageous projects as the 16-cylinder Bentley Royale and a litter of 28.5L Fiat-inspired Bestionis and a whole lot more. 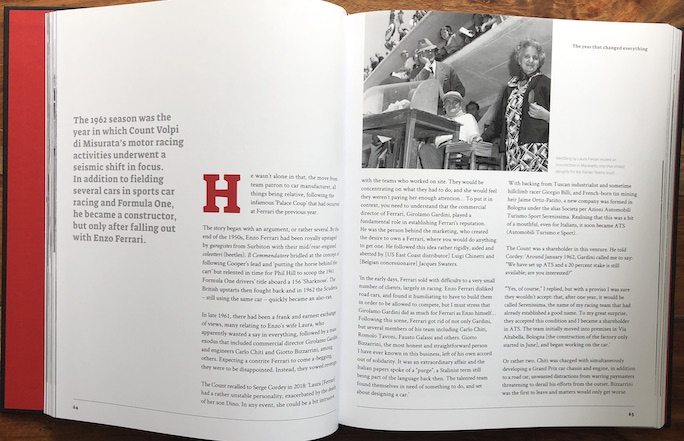 Laura Ferrari in a good mood. You have to know the whole story, regardless which version, to apprehend what momentous events she set in motion when she wasn’t. Which is why this chapter is entitled “The year that changed everything”.

Almost a third of the book is devoted to backstory, specifically the role of the 250GT Berlinetta. Also covered in good and necessary detail is the 1961 “Palace Revolt” at Ferrari without which the Breadvan story would either have happened differently or, more likely, not at all. Heseltine is candid: he is obviously aware that the story, especially the part pertaining to Enzo Ferrari’s wife Laura the Meddler, is “rarely told the same way twice”—so he picked the most entertaining version. One other aspect of the Breadvan story that is usually treated as a mere footnote elsewhere is what the driving force behind the project, Count Volpi and Suderia Serenissima, did afterwards. 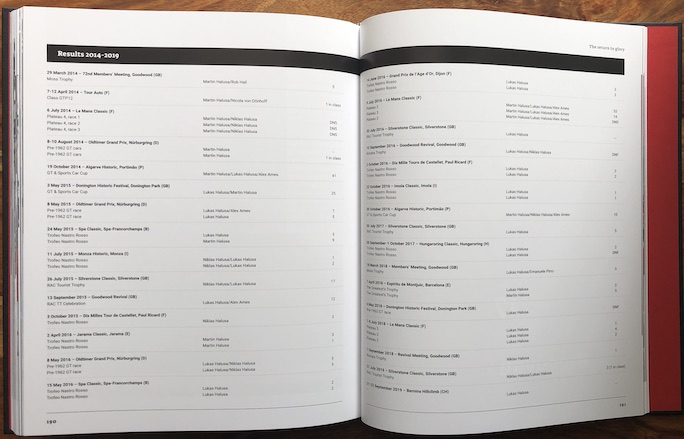 The Breadvan had a rather short competition career in period so there is not a whole lot of ground to cover. Some of Heseltine/Bluemel’s new research has to do with confirming the chassis’ appearances at Daytona and Sebring in 1962 (i.e. in pre-Breadvan configuration). The car survives to this day but changed hands very many times and underwent partial and botched restorations before an owner finally, in 2014/15, went all out and returned it to original spec and splendor (such as it was)— not to gather dust as a priceless trailer queen but to be flung about as an active no-holds-barred participant in historic racing (which is also covered here). The studio photos of the restored car are by John Colley and all this material is pretty much new to the record. That section is aptly titled “The return to glory”—if you believe the Table of Contents . . . on the actual page the chapter is titled “Breadvan in Focus.” Many other chapters are afflicted by this same sort of overzealous creativity. Why? To put it differently: WHY?? No practical purpose is served by inconsistency. Heads must roll.

Speaking of heads. How hard could it be for the caption writer to actually read the body copy and spell stuff the same way?? Poor old Gunter Sachs von Opel is once again (wrong in Sonnery as well) burdened with an incorrect “h” in his first name. (Actually, it’s wrong in the Index too. More heads must roll.) The Sachs body copy is, incidentally, written by not only a fellow German, who would know how the name is spelled, but someone with a family connection, the Countess von Dönhoff who is a racer and Ferrari enthusiast herself.

The book is extensively and suitably illustrated although several of the photos were already in Sonnery’s, and quite a few of those were then new to the published record; in several cases they look better here because the new book uses different paper/photo manipulation and the photos are generally shown at a larger size. That the photo captions are printed in grey is not helpful to anyone of the same vintage as a GTO.

So, it is a very fine book, it advances the body of knowledge—all good. Be aware, though, that Heseltine, while offering more overarching narrative, only excerpts from the interviews Sonnery conducted which leaves usually already sparse first-person context on the cutting room floor. 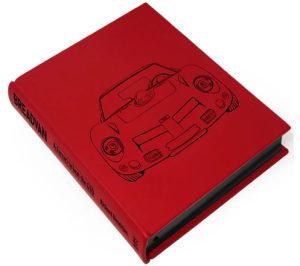 By the way, both books started out at the same MSRP, $80, and you see how much the Sonnery book has risen. Unless you like wasting money don’t let the new one get away. 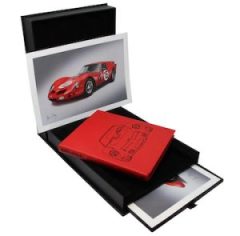 If that’s not special enough, there’s a . . . wait for it . . . Baker’s Edition of 19 autographed copies (by the three authors and racing driver Emanuele Pirro), at £1,500 which gets you a black leather clamshell baker’s box with debossed Breadvan graphic. Inside is the same book as the Collector’s Edition, sitting atop a special compartment with pull-out tray containing three signed prints of John Colley photos; ISBN 978-1-907085-48-1.

Breadvan – A Ferrari To Beat The GTO