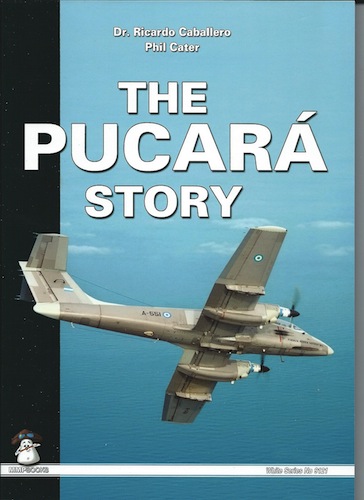 Wanna buy a vowel? How about an “A”? Or would you have known without any help that the Pucará (Fortress) comes from Argentina? You’d be quite the aviation geek (it’s a good thing!) if you did.

The maker of this 1970s COIN (counter-insurgency) and CAS (Close Air Support)—and sometimes even FAC (Forward Air Control)—aircraft is the Fábrica Militar de Aviones, and so the official type designation is FMA IA-58. So versatile was the Pucará that it could handle all these roles on the same sortie. It’s a low-wing two-turboprop all-metal monoplane with retractable tricycle landing gear with low-pressure tires. It also has wings that are bent in the middle to allow it to do steep dives. And it has a stooped nose for better ground visibility. What this means is that the Pucará can be staged out of rough, marginal locations.

Author Caballero is from Argentina and a commercial pilot, aeronautical engineer, and aircraft historian; Cater is a UK Ministry of Defense veteran on the logistics/business side and an aircraft modeler (they did not know each other before this project!). During the Falklands War the British captured several Pucarás—some airworthy—and took them back to the UK so you can actually see one in a museum relatively easily.

Beginning with the start of the program in 1966 the book follows the Fortress to, well, today—it is still in service. FMA and other vendors’ employees were interviewed and flight and ground personnel contributed insights, making this a well-rounded survey of an all too little known airplane.

There are an enormous number of illustrations and the book’s size lends itself well to getting the most out of them. This publisher’s books are always written with the modeler in mind but this book—which also includes an entire chapter with tips for them—has a special treat. A former FMA tech, Luis Murúa, has scratch-built several FMA projects that never went beyond the drawing board stage and two of his Pucará variants are shown here, a jet-powered IA-60 and a twin-boom IA-67. (Well, it helps to have access to the original blueprints!)

From wind tunnel tests to detail shots of practice bombs to ejection seat schematics, it’s all here. The color profiles (89!) are by a number of artists (including Caballero, who’s list of skills is simply shamefully long); they are in at least two different scales and include three-views. Emblems and insignia are also shown in detail. Appended are specifics about aircraft by serial number and a 1982 timeline of a Pucará squadron that was practically decimated. Small Bibliography; no Index.

The last words in the book are Misión cumplida. Indeed.