The Art and Inventions of Max Fleischer, American Animation Pioneer 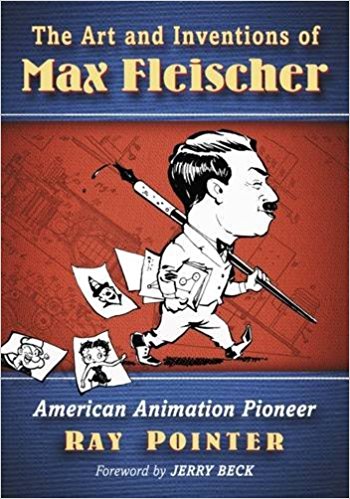 Betty Boop is alive and well. She debuted, with poodle ears, in 1930; and now, in 2017, she stars in her own official website, offering a quick look at her history and a large catalog of Boop merchandise. The Max Fleischer legacy lives on. Betty has had her ups and downs. She had shed the dog ears almost immediately, and, because of being heavily censured and censored by the puritans wielding the 1930s Hayes Code, her skirt grew longer, the garter disappeared—along with a good bit of her boop-boop-a-doop.

Fortunately toons live a postmodern existence, forever young or old, evolving and devolving as tastes and customs change, and Betty is now once again her own, early, sexy self again. Fleischer’s other great stars, KoKo the Clown and Popeye the Sailor, also linger in the public imagination, both still earning attention and respect, but it is Betty Boop who keeps winning the hearts of subsequent generations. Ray Pointer’s book will be warmly received by those interested in cartooning and animation generally, in Boop specifically, and those who may be curious about her creator Max Fleischer. 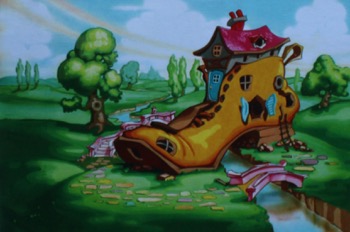 Walt Disney’s early career runs roughly parallel to Fleischer’s, casting a very long shadow from the 1920s onwards. Fleischer (or should I say “Fleischers” as there are brothers involved) could never really compete with Uncle Walt in the field of feature-length animation. His Gulliver’s Travels (1939) and Mr. Bug Goes to Town (1941) lack the loveliness, enchantment, ease and skill of Snow White and The Seven Dwarfs (1938). Fleischer “continued to build a mental wall between himself and Walt Disney . . . denying that Disney was making major advances that Fleischer was not.” 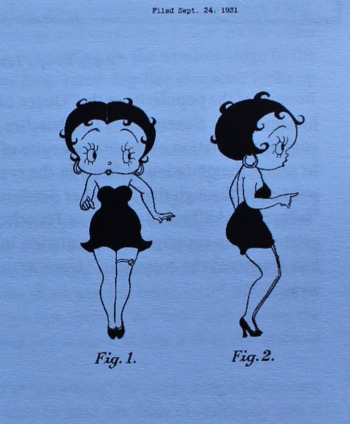 The Fleischer-Disney relationship is covered in depth, and the work from Max’s studio always comes off as grittier than the work of Disney and the other competitors. Popeye’s toughness, for example, was not only physical. His wisecracking and weird philosophical bent exuded more New York attitude than California sunshine. And it would be hard to imagine a credible Disney flapper. But this relationship is but one of the major themes running through Art and Invention. In the contretemps between Max and Richard Fleischer, for instance, Cain and Abel come to mind. Max’s unhappy last years add poignancy. 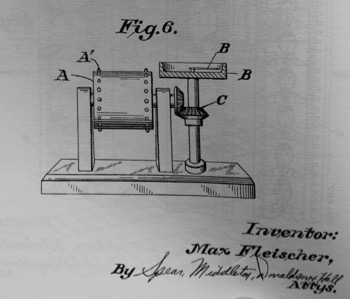 Throughout the book are illustrations of Max’s patents, devices for enhancing the flow of animated films and speeding up the course of action. Much information and insight is given about the structure of an animation studio, the processes involved and the many people needed to produce a steady stream of product. The partnership—distribution, financing—between Fleischer Studios and Paramount illustrates the business end of show business. Fleischer versions of Little Lulu and Raggedy Ann appear, along with the acclaimed Superman cartoons. The book also reminds us of the movie theater experience of long ago, when newsreels, shorts and cartoons preceded the main feature. Several pages are given to brief biographical sketches of now obscure animators and producers.

The book comes complete with photographs and illustrations of the creators of the cartoon characters and the characters themselves. More fascinating than these, however, are the many photographs, with a wealth of captioned descriptions, of the daily operation of the studio showing the three-dimensional backdrops, lathe-table camera set-ups, and the many, varied artisans at work. Pointer, a 40-year film and animation professional, has obviously gathered, over the decades, a vast collection of these photos, along with many and diverse documents, and he applies them meaningfully. His long tenure in the business adds considerable weight to his story.

Art and Invention, like many of the books published by McFarland, lands as a working blend of information, entertainment and, with its chapter notes, comprehensive filmography and detailed index, scholarship. Boop-boop-a-doop forever.

The Art and Inventions of Max Fleischer

Railways and Industry in the Western Valley: Newport to Aberbeeg »
« Stile Ducati: A Visual History of Ducati Design