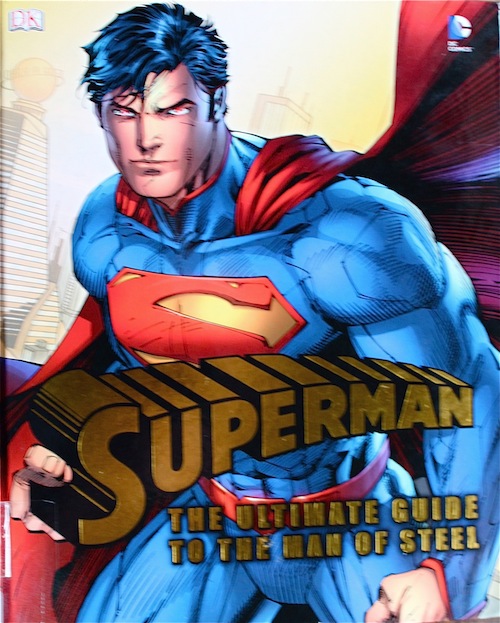 I don’t like this book, but that doesn’t mean that it is an inferior work. But that doesn’t mean that the book is not without problems. Often the pages are much too crowded and there is a certain extra-glossiness, even for such subject matter, that detracts rather than enhances. After my initial reading—although one does not so much read a book like this but rather attempts to absorb an encyclopedic amount of information—I was perplexed to find that The Ultimate Guide is geared for youngsters, the six- to fourteen-year-old set. It really does not seem any more patronizing than the usual coffee table tome from DC/Marvel. Perhaps the introductory material is a bit slimmer, but I found no overt condescension, and a six- or seven-year-old, no matter how rabid a fan, would find much of the material difficult. Also, a two-page table of contents, an introduction and a foreword, along with a index of over three pages, is more in tune with an adult readership. 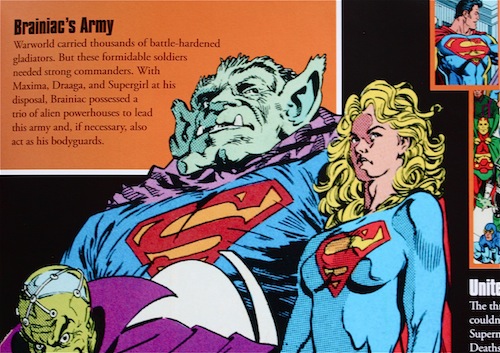 The book is set up sequentially, beginning with The Golden Age, going through Silver, Bronze, Dark and Modern Ages and stopping at what DC calls the New 52. Although a subset of The Modern Age, it is enough of a paradigm shift to be an age of its own, especially considering that although DC/Marvel is not the only superhero comic universe, it may as well be. The New 52 needs some explanation: Superman turned 75 years in 2013, and throughout the decades Superman and his universe expanded exponentially, to the point where one world, one Earth, one universe could not contain him. Along with many other (all?) DC/Marvel characters (the two giants, DC and Marvel, merged in 1996 creating an Amalgam Universe), Superman existed in several worlds simultaneously, including at least three Earths, warping the continuity (continuity is quite important for hardcore comic fanboys), overlapping, contradicting, getting in his own way, and causing a continuity calamity.  In 1985, a Crisis on Infinite Earths “established a new status quo within the DC Universe” that gave the writers and artists free reign to “create fresh mythologies.” It didn’t take long for matters to become convoluted anew, so in 2005 a sequel emerged, Infinite Crisis, and in 2011 fifty-two DC titles were relaunched, abolishing the established numbering sequence to begin each title with a brand new NUMBER ONE, once again retooling the mythos. And, it seems, although offering a broad yet detailed history of Superman, his life and times, The Ultimate Guide’s main thrust is to explain the new grounding of this beloved and honored hero, with two pages devoted to what a reader, long-time or just coming aboard, has to know about the “new” Superman’s origin, history, powers, friends and enemies; some of this being old wine in new bottles, some of it actually new, overall a simplification of all the story lines, some quite bizarre, that had come before. 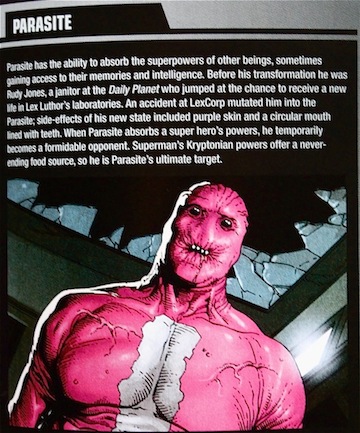 So what’s not to like? As mentioned, this book is too crowded, jamming 75 years into 200 pages. Often books like this one will reprint at least one story all the way through, but The Ultimate Guide, with questionable success, tries something different. For each Age, a key issue is cited, showing a downsized copy of the comic’s cover, but only giving a written synopsis illustrated with tiny-sized snippets from the original comic book pages. Another distraction is that the illustrated lists of foes and friends seem endless, but in an ultimate guide, one would expect exhaustive coverage so I shouldn’t complain. The artwork throughout the book is mostly from later renderings; I would have liked to have seen more of the classic Superman. But I am closer to Superman’s age than to those of the book’s targeted age group, and this may just be one old man’s grumbling; and in this grumbling is found the crux of why I don’t like this book. Overall the book did what it set out to do, so why protest?

The answer, I think, lies somewhere steeped in nostalgia, pining for a simpler Superman, one more like the Saturday morning serial’s Kirk Alyn, TV’s George Reeves, and particularly the consummate Christopher Reeve, or more to the substance of this book which does not bring radio, television, or movies into the history, the original Joe Shuster Superman and the “standard” Superman drawn by Curt Swan. (There is one exception to the sinister, more complex Superman found in the Dark Age, the wonderful and whimsical Loeb and Sale’s Superman for All Seasons.) I long for Superman battling simpler villains than Parasite or Encantadora who “channels vast magical abilities through the mystical Mists of Ibella” and “ flirts with Superman while plotting to betray him.” Do we really need or want an alternate Superboy who was created in a laboratory after one of the DC continuity shakeups erased the original? Do we really need or want over a dozen “Alternate Realities” where The Man of Steel becomes a nineteenth century Frankensteinian monster or a medieval King Arthur substitute? The Ultimate Guide presents a complex, often angry, often brutal hero who has become far too complex, angry, and brutal for me.

This curmudgeonly sense of loss, then, becomes an ill-deserved critical swipe at an innocent (unless one considers this an expensive, elaborate advertisement for the monthly magazines) book on a valued and darling legend, one who has obviously endured all of the adventures, worlds, situations, traps, snares, humiliations, enemies, perfidy and danger that seventy-five years of editors, writers and artists could throw against him. Those of you under twenty-five should just ignore an old man’s conceits and check out the Superman who has been fashioned just for you. The Ultimate Guide is a logical place to begin.