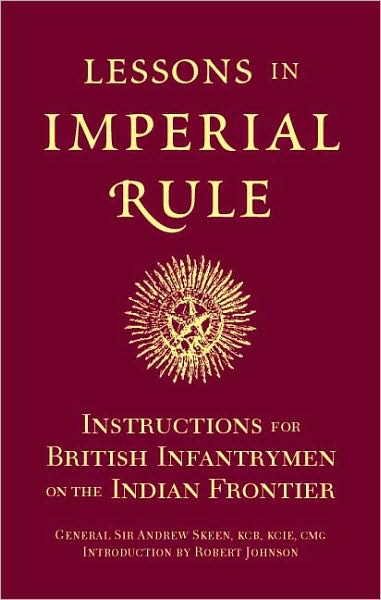 Instructions for British Infantrymen on the Indian Frontier

“Britain’s return to Afghanistan in 2001 alongside Coalition forces, and the Pakistan Army fighting in Waziristan, conjures inescapable parallels with earlier conflicts, and the Third Afghan War in particular. Remarkably, many of the ideas and principles Skeen identified still hold true.”

Remarkable indeed, considering that this book draws on experiences made a hundred years ago, in the end stages of a British military involvement with the Indian Army spanning almost three hundred years. The parallels to today are the unchanging, hostile terrain and the equally hostile mindset of its occupants—amongst themselves and towards foreigners bent on imposing change.

Located at what historian Arnold Toynbee once called “the meeting place of three empires” the internal strife caused by warring clans, tribes, and religions in this part of the world long predates Afghanistan becoming a thorn in Western flesh.

Handbooks and Manuals are ubiquitous in the military and so the 1925 Manual of Operations on the North-West Frontier of India laid down tactics and rules of engagement applicable to this particular part of the world. General Sir Andrew Skeen, author of this little book, sought to offer young officers a handier, coat pocket-sized, pragmatic primer.

Skeen had been commissioned at only age 18 and records, “When young, I once had cause to thank a senior for his wise teaching of the needs of frontier fighting. His reply was: ‘That’s all right, youngster, pass it on.’” And after serving in India and during China’s Boxer Rebellion, then Word War I before returning to India, Skeen, by then considered one of the best leaders of troops the Indian Army ever had, did indeed have something to pass on, specifically his experiences of hill warfare in the 1919/20s. In fact he titled the original edition of this book, published in July 1932, Pass It On. It was reprinted already a few months later without any need for changes other than correcting a few typos and some minor rewording for clarity. The same applied to the 1934 reprint that also struck references to the “pioneers” which by then had been phased out of that theater of operations. It became an unofficial textbook, with copies in every sergeants’ mess and combat unit in the British Army. By the time of the next reprint, 1939, Skeen was already dead and his text remained largely unaltered but was enhanced by the addition of footnotes and an new closing chapter addressing air operations, armored cars and other accoutrements of the changing face of warfare.

What made Skeen’s book so relevant in its day, and still interesting today, is the underlying problem he was faced with. He oversaw a numerically vastly superior force—83,000 men, thousands of animals, even bomber support when he needed it—and still got beat. His “savage enemy” used the terrain to better advantage, was conditioned by the demands of his everyday environment to be tenacious and stoic, and was given to religious fervor. These formidable obstacles were compounded by a circumstance specific to that post-WW I timeframe: the “devolving of command to junior officers” who lacked experience both as warriors and as leaders of men, especially men of a fantastically different culture in whom they had no confidence.

Whether it’s motivating (literally) camels or (psychologically) men, Skeen has practical advice, from dealing with low morale to how to secure terrain behind you as you advance. It is not just the military reader who will find this book interesting but anyone who likes or needs to deal with complex problems.

While the technological specifics of today’s fight have changed drastically, the mindset of the Taliban has not. If nothing else, this book will bring home that point—and make today’s dilemmas a bit easier to understand.

Instructions for British Infantrymen on the Indian Frontier