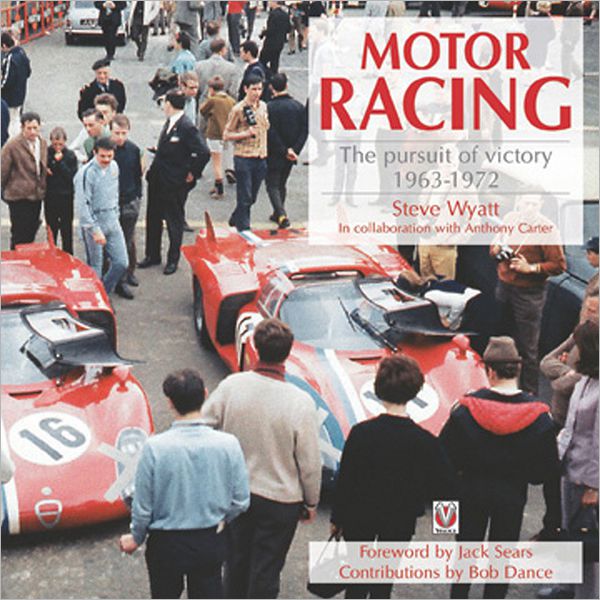 This is the third installment of the “Motor Racing” series begun by Anthony Carter in 2005. It picks up seamlessly where Carter’s last left off (1962) and is also seamless in terms of visual continuity and approach to presentation.

Books like this want to make you hoist the “Do Not Disturb” sign and take the phone off the hook because you’ll want to let the distractions of the present fade away and make room for the reminiscences of yesteryear to bubble up. In fact, if you have a phone to take off a hook then you’re exactly the sort of person to whom this book will be meaningful and possibly personal, not just random information. Wyatt, as Carter, roamed the British and Continental racetracks of his day and snapped photos “as a typical enthusiast of the time,” mainly for his own entertainment. This means first of all that most of these photos have not been seen in print before; it also means that they are rather less polished or thought-out than a professional photographer’s—wherein lies their very appeal. The unstaged, informal shoot-from-the-hip casualness allows, especially today, so many decades later, many happy discoveries of people and circumstances in the periphery that the photographer probably captured entirely by accident.

If you know your period racing, this book takes you right back. Even if only modern racing is your poison you’ll find here a young Roger Penske, a fixture behind the scenes of today’s Nascar and CART. The book is obviously focused on European events but those were the days when American drivers (Hill, Gurney, Salvadori etc.) and American cars (Cobra, Ford Galaxy, Ford GT40 etc.) made frequent, and successful, appearances.

Covered are GP, F1, F2, F3, Sports, GT, and Saloon racing. If you consider that Wyatt’s book is 40% longer than Carter’s but spans only 10 instead of 30 years you’ll appreciate just how much racing took place in that eventful decade. Aside from the ever-present experimentation with new technology it was marked, especially in the latter half, by two developments that ushered in lasting change: improved driver and track safety after Jackie Stewart’s 1966 crash at the Belgian GP and sponsor advertising on cars after 1968.

Wyatt and Carter sifted through over 12,000 photos (“our collaboration became an agony of indecision”) before settling on the ca. 420 presented here. Less than 10% are in color, and some were taken by a fellow enthusiast, John Hillier, whose collection Wyatt administers. The photos are very well reproduced, extensively captioned, and augmented by an assortment of paddock passes.

The races are presented in chronological order, with a brief introduction to set the scene both in terms of race highlights and Wyatt’s recollections about getting there and other observations of a personal nature. In a way, this is like looking through someone’s scrapbook with that person providing commentary as you turn the pages. There’s drama and there’s trivia, but most of all there’s immediacy. The several sidebars are by Bob Dance, another contemporary (mechanic on the Lotus, March, and Brabham teams); the Foreword is by “Gentleman” Jack Sears for whom this very decade represented a highlight in his career as a driver. Bibliography; good Index.

If you attended races in those days the text and photos will evoke memories of your own, if you didn’t you’ll come to see just how much you missed. It would only be another few years until the kind of unfettered access to drivers and paddocks Wyatt and his cohorts enjoyed disappeared forever.

These days, Wyatt regularly competes at the UK amateur level in classic saloon car racing in an Alfa Romeo at some of the very venues he used to photograph. Considering how many more photos he and his friends have, this is surely not the last book! Coupled with a host of related titles of recollections by mechanics and drivers this publisher has and will produce, anyone with an interest in an exploring—and from off-beat angles—an era in racing vastly different from the present has much to look forward to.