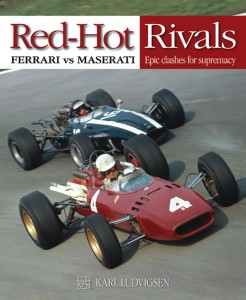 More than 10 years before Enzo Ferrari ever built a car under his own name, Maseratis were a thorn in his flesh. They were so uncatchable that after three years of provocation he was seriously thinking of buying some himself. “If you can’t beat them, join them!” The time is 1933/34, Enzo has been running his own Scuderia since 1929, fielding Alfa Romeos—and his best drivers keep defecting to Maserati. This is the spark that ignited the fire that would smolder for decades and that is the topic of this book.

“The reader is entitled to ask whether the author of a book about a rivalry favours one side or the other. I hope it doesn’t show, but I’d have to confess to an affection for Maserati.”

Ironically, both marques are now owned by the same parent, Fiat Group. In fact, between 1999 and 2005, Maserati was merely a division of Ferrari S.p.A. Enzo, the self-described “agitator of men,” would have found that only good and proper but the reasons the stars aligned themselves this way go far beyond anything he could engineer, both in the physical and the metaphysical sense.

This book, however, is directly related to that merger. The US Ferrari magazine Forza began to devote ink to the new stablemate and Ludvigsen, who contributed to it, volunteered himself to write a series of articles entitled “Home Town Rivalry.” Having witnessed quite a bit of it personally, chronicling this particularly juicy era had long been on his mind. That work has been expanded, and blossomed into this book.

Back in the day, Ludvigsen visited the respective factories, knew the principals and key personnel, and attended the races. Moreover, in the 1960s he owned—be still my heart—a 1952 A6GCS Maserati and raced it in VSCCA events. Add to that his engineering and writing background and you have strong odds that this book won’t disappoint. From boardroom to workshop, his story covers all angles. As in so many of his historically themed books he begins by creating context, a grand sweeping establishing shot that takes the reader back to Roman days and Italian geography, the area’s arts and crafts roots, and the histories of the Maserati and Ferrari families and their respective offspring’s automotive activities.

Fifteen chapters then juxtapose a pair of cars, one from each maker, that did battle against each other between 1948 and 1967, from sports cars to Formula One. Ludvigsen favored this approach over a strictly chronological one, the trade-off being a certain degree of overlap for a more focused take on the cars themselves. Interestingly, the chapter titles only list the cars’ model numbers and not the maker (always Ferrari first, then Maserati) which, if nothing else, is an incentive for the new reader to get up to speed with model designations. A closing chapter briefly touches upon historic racing and a bit of modern corporate history regarding each marque under the Fiat Auto and Fiat Group umbrella.

Cars being “machines” means that the text touches upon matters mechanical and technical, in the form of fluidly written narrative—no tables, charts, diagrams. About two dozen b/w cutaways and technical drawings are as scientific as it gets. Most of these are credited and show whole cars or engines and specific assemblies. The cars are mostly 1/3 of a page—just big enough to show that you can’t see everything! The vast majority of photos are from the period; a few show the cars in modern times and settings. That even the period photos seem purpose-made and a perfect fit for the text speaks to the staggering depth of the Ludvigsen Archive (which has absorbed entire photo collections—Mailander, Rosenthall, LeGrand to name a few, and archives—Posthumus, Dalton Watson) and also the abilities of the photo researcher who must have superhuman memory and/or sophisticated search tools. The photos themselves are not credited except in bulk at the end. They are thoroughly captioned and every person is identified, which is such a small but important thing to do and yet missing from so many books.

The endpapers show two fabulous illustrations of the 1957 German GP by the hand of the late German artist Walter Gotschke.

Even in 2008 money this book was uncommonly cheap. That you can still buy existing stock now at that price won’t last forever. Run, don’t walk!

PS: In the larger scheme of things, the later years of the Ferrari/Maserati tug of war have direct bearing on a later development in Ferrari history: the “Cobra war,” which, as this book makes so compellingly clear, in terms of historic meaningfulness is a mere side show compared to the Maserati situation.

The Fate of the Sleeping Beauties »
« Jaguar XJ220: The Inside Story