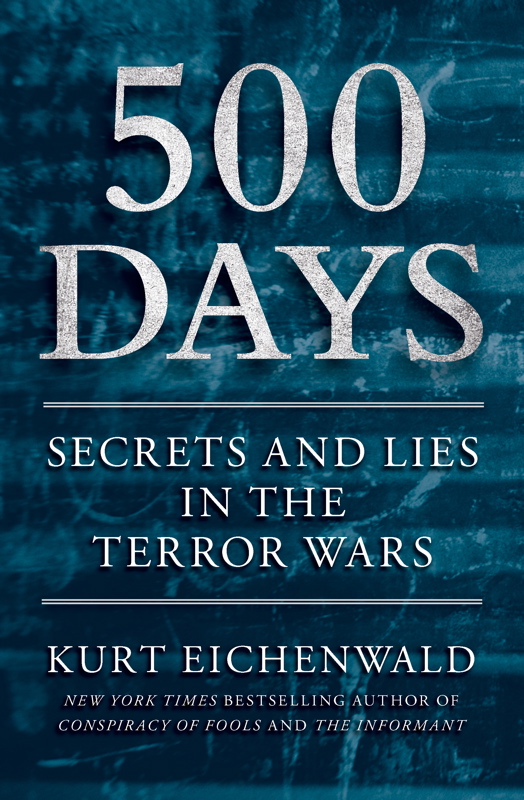 “Riveting,” “spellbinding”—I’ve always wanted to use those words in a review, and now I can! Kurt Eichenwald, a New York Times bestselling author and contributing editor at Vanity Fair, has spun a true story about the al-Qaeda 911 attack that reads like a political thriller. The reason, of course, is because it is a political thriller that involved us all in real life. To quote the author: “This book is based on more than six hundred hours of interviews . . . with more than one hundred people involved in these events, as well as thousands of pages of documents” which “include notes of interviews and interrogations” with waterboarded and tortured prisoners.

The quotes used in the book are accurate and telling, revealing the personalities and motivations of the people involved. “Biblical prophecies are being fulfilled. This confrontation is willed by God.” —President George Bush. “The person who did this is the spawn of the devil!” —Attorney General John Ashcroft, referring to a White House colleague who disagreed with Ashcroft’s views in writing. “We gave the president the wrong text. He was ad-libbing.” —Condoleeza Rice on President Bush’s diplomatically important and carefully structured Iraq speech to the U.N. Most telling perhaps: “Someone needs to be considering how history will look back at this.” —Mark Fallon, Deputy Commander, Guantanamo, referring to prisoner treatment.

The story is chopped up into one-and two-page segments that keep the reader hopping back and forth across the narrative as the book’s 18-month timeframe advances. This quick-cut attention deficit disorder style occasionally becomes burdensome and tiring because you want to continue with where one thread of the story was going, but have to break away and start a new strand of equally interesting but different direction. The author generally pulls off the jumps gracefully, almost always advancing the multi-pronged story smoothly without losing the reader’s interest. This delicate literary balancing act allows us to follow the bureaucratic power struggles of Ashcroft, Rumsfeld, and hundreds of other players, including Osama bin Laden, as they fight to control the direction of the action. In many instances it becomes obvious that members of the US administration frequently care more about advancing the influence of their bureaucratic fiefdoms, as opposed to concentrating on what actually needs to be done. For example, as a result of a turf war between the Army and the CIA over the timing and control of the initial invasion of Afghanistan, Osama bin Laden escapes Tora Bora due to the Army’s refusal to send in the needed troops to block his escape—an apparently spiteful move on Rumsfeld’s part to show up the CIA’s inability to wrap up the conflict efficiently on their own.

To torture, or to not torture, is a question that reverberates throughout the book. The FBI believes you catch more flies with honey than vinegar and that all prisoners have basic human rights, while the CIA believes the opposite. Both methods work, evidently, but the information appears to come faster with kindness than with pain. Reading about how the administration legalized torture is disturbing. As author Eichenwald documents, administration lawyers like John Yoo and others rework the legal definition of pain until anything short of permanent damage to internal organs or death is acceptable. As a result, we now live in a world where legal logic trumps morality. The concepts of “right” and “wrong” are no longer relevant when seeking information or achieving a goal deemed important enough to attain at any cost. Throughout history the balance between living strictly morally or strictly by rule of law indicates the cultural sophistication of the civilization or religious organization applying the thumb screws.

The book opens with a short Introduction, followed by a long list of characters featured in the book from the White House, the CIA, the Pentagon, the Department of Justice, the Department of Transportation, the State Department, the National Security Agency, the Centers for Disease Control, the Senate, the federal courts, as well as people from Great Britain, Canada, Bosnia, Italy, Afghanistan, France, Russia, Germany, Syria, Libya, Australia, Indonesia, the United Nations, the International Atomic Energy Agency, al-Qaeda, members of Jemaah Islamiyah, journalists, lawyers and others.

After 522 pages of text, the Acknowledgments are followed by a comprehensive 52-page Notes and Sources section. A good Index finishes off the book. In today’s world one never knows exactly what’s true and exactly what’s not, but this book certainly lays out a version of the events surrounding the 911 attacks that is worth reading and giving serious consideration to on many different levels. A 30-minute radio interview with author Kurt Eichenwald can be found on NPR.