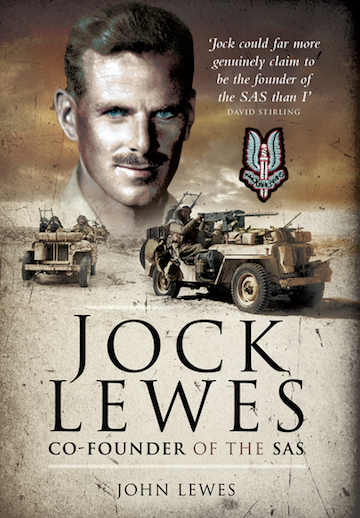 November 2016 marks the 75th anniversary of the Special Air Service’s first raid. The author’s uncle was a founding member of the SAS and pretty much single-handedly developed its training protocols, which is why his biography is being re-issued a third time.

The cover illustration of this third edition is different from the previous one, and the changes are surely not merely for artistic reasons, except, 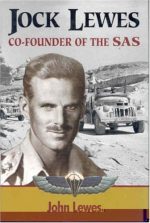 possibly, giving the dashing young man piercing blue eyes this time around. That the cars are different is probably neither here nor there although the new photo does convey a more palpable sense of action. No, it is the quote by David Stirling that is really noteworthy. He, history has recorded, is credited as the nominal founder of the SAS but as he himself expresses in this quote, and this book certainly bears out, Lewes (1913–1941) was a key shaper of the elite service’s tactics and personnel.

As intriguing as the cover is, especially to someone like me who enjoys military history and stories of adventure and has great interest in the battle between the Allies and Rommel’s forces in North Africa, I found the book lacking for varied reasons. John Lewis, the protagonist’s nephew, may be an educator but the book’s organization is haphazard. A good editor could have helped in this and other regards. It takes, for instance, more than half the book to get to the actual war operations the cover hints at. The first half of the book is a heavy drudge of a narrative through Lewes’ privileged upbringing as the son of a high-ranking former Indian Civil Servant in Australia and as a student at Oxford where he seemed to row a lot and study very little. No doubt all this detail about the early years will be of interest to hard-core SAS buffs and military historians who want the maximum information on the man but I found it all very heavy going.

Conversely, I think that far too little is made of the military operations that Lewes was involved in. A lot of the operational information is glossed over, including that of Lewes’ tragic death during a Messerschmitt 110 attack in 1941 which I found was dealt with in a very perfunctory fashion. It is as a soldier that Jock Lewes should be remembered. One is left in little doubt, both from reading elsewhere and from this book, that Lewes was a highly gifted operator—and that is where the focus of this book should have been.

The book seems to make more of a thing about Lewes’ prowess as a rowing “hearty” at Oxford than that of his military exploits; the author is gushing to the point of hero worship which is perhaps understandable given the family relationship but it hardly represents the fullness of the man. That he died so young and so early in the war does result in a sharply abbreviated life and one can only wonder what else he might have achieved in his military career.

In the main, the writing is very dry and bland and I was left wondering what a writer/historian with a more exciting style and better command of material would have made of this life story. One can’t but help compare this book to the authorized biography of David Stirling by Alan Hoe: twice the size of this book, which is packed with not only the details of Stirling’s life but has far more detail on the theater of operations in North Africa and the tradecraft of the SAS.

On the positive side, I am glad that the book was written no matter how flawed I personally find it. Lewes deserves to be remembered as a war hero and it is wonderful that Pen & Sword have decided to re-release it to keep his memory alive and make sure that there is information there for the enthusiast and the historian to call upon. I struggle to recommend the book to the general reader though, due to the way the information is presented. I do however see this book appealing to the dedicated SAS and military enthusiast who wishes to have the life of this brave young officer on their shelves.

The book is produced to the usual high standard of this publisher and features a generous selection of black and white photographs. There is also a fairly comprehensive Bibliography at the end of the book for those who want to take their reading further.

The Caped Crusade, Batman and the Rise of Nerd Culture »
« Bugatti Veyron: A Quest for Perfection