Combat in the Sky: The Art of Air Warfare 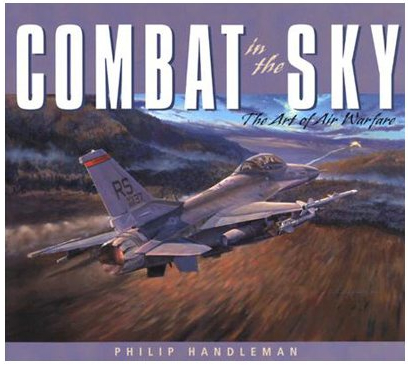 It would be only too natural for any sensitive reader’s blood pressure to rise at seeing the words art and warfare in the same sentence. Fear not, Handleman himself is acutely aware of this tension and devotes a considerable amount of grey matter to addressing it. The very first words in the Preface are “War is an ugly business. Therefore, at least upon first blush, it would seem incongruous for art . . .” We always make the point that it is essential to read such introductory material lest a book’s intentions are misunderstood. In fact, this Preface is so well articulated that one is moved to say that if you threw the rest of the book away, you’d have gotten your money’s worth!

That said, one thing that is not cleared up is whether the subtitle refers to the art of conducting war in and from the air (i.e., the flying and strategizing) or to the art of depicting it (i.e., the painting or photographing). This book seems to do both, and, judging by its organization, it uses the latter to accomplish the former. This theory is supported by the observation that not all the illustrative material gathered here, specifically the photos, rises to the level of “art.” In most cases the photos are snapshots or at best stock or PR photos with no storytelling power whatsoever. They are, however, related to the specific engagement or theater of operations the text describes. (That some of the events covered seem to have no primary connection to aerial warfare is yet another head-scratcher. Example: the last item in this book, Afghanistan 2002, is all about “boots on the ground” and shows a photo of a Hercules being boarded by Marines.) If Handleman’s intent was to showcase the art of painting then why weaken its impact with uninspired photos? Absent an explanation by the author one has no choice but to question his choice. This is complicated by the fact that Handleman—an award-winning producer, director, author, photographer, bibliophile, and pilot—is known to possess one of the premier private aviation libraries in the US so who but not he would know best the breadth of available material? Add to that his membership in 35 aviation organizations, running his own airport (Handleman Sky Ranch), the directorship of the Michigan Air Guard Historical Association (which manages the state’s largest military air museum) and you have someone who is better connected than most. Incidentally, the National Business Aviation Association awarded him in 2010 their Combs Gates Award for an upcoming book.

Anyway . . . the book is the way it is. More than 25 pages in this 200-page book are devoted to an Introduction that examines the allure flight holds for man, from the times of the Old Testament to the Greek gods to da Vinci to the modern artists whose work is used here. Another puzzler is why of the latter the names and examples mentioned/shown here—Farre, Hubbell, Smith, Wooton, and Bonestell—are not among the 15 featured in the book proper. The “Gallery” section of the book tells the story of air operations from World War One to Afghanistan. Probably 2/3 of the illustrations are paintings, few smaller than half a page and several going the full 23” width of a spread. Each era is prefaced by a page of big-picture remarks; each specific event is accompanied by either one painting or one/several photos. The commentary describes the events in terms of general background as well as specific data points and how those relate to the illustrations in terms of technical features, markings, personnel, conditions, and “action.” Beyond calling attention to the specifics of a scene and stating the title of the painting and the name of the artist, nothing is said about the art in terms of technique, artist, or oeuvre (bios are bundled at the end).

More than the photos, the paintings—especially with the guiding words from the Preface in mind—invite and require unhurried study. For the artist especially there is much, much to discover here: style, detail, composition, not least the painter’s ability to properly research a subject, be it the size of a rivet or how, say, cloud cover dispersed the light at just the moment the action report said something happened. Readers with a well-rounded grasp of aviation art will, one expects, wonder why these examples made the cut and not others. Readers with a well-rounded grasp of military history may dislike the emphasis on American actions (the Falklands War, though, is covered and shows a nice painting of a Victor refueling a Vulcan) or point of view. A difficult book, then, to assign a proper place but not a difficult book to simply enjoy for just the artwork.