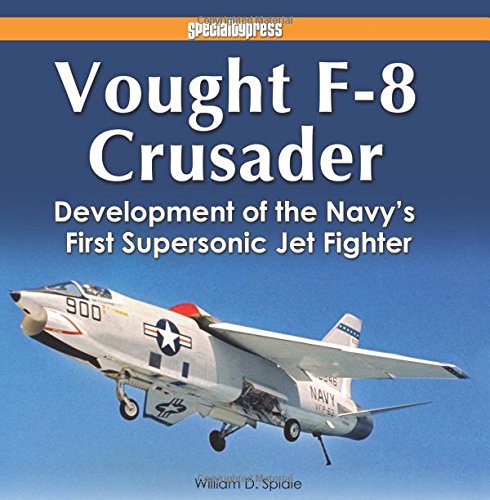 “With the Korean War raging on, the skies over the Yalu River were dominated by such transonic aircraft as the North American F-86 and Soviet MiG-15. The thought of a supersonic jet fighter (much less one that could operate routinely from the deck of a U.S. Navy aircraft carrier) was tantamount to science fiction.”

In the unlikely event that you’ve never touched an airplane book before and this is your first one, you’ll probably get the wrong impression. This one has quite a different flavor, probably because it is this author’s first book—which is mostly good but also has a downside insofar as Spidle showers the unsuspecting reader with reams of jargon and technical and operational parameters that only flyers, and particularly naval aviators, would know. Random example: try using “no squawks were written” in a sentence. Or, what does “spotting” an aircraft mean? Unless you know your way around an aircraft carrier deck, it’s almost certainly not what you think. Also, Spidle is a trained Airframe and Powerplant tech so for him, techno speak is a second language. 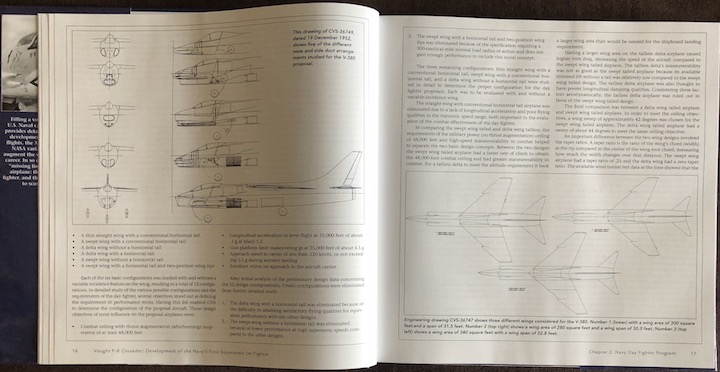 As the subtitle would indicate, this book leans towards the design, development, and testing side and not the operational history, except, perhaps, in the context of the record-setting flights conducted by NASA, the type’s third principal US operator (aside from the US Navy/Marines; and also the French Navy and Philippine Air Force). The combat history, especially during the Cuban Missile Crisis and then Vietnam vis-à-vis the MiG-15 has been amply covered elsewhere and Spidle intentionally doesn’t repeat it here. His focus is on the early years and the original fighter and reconnaissance prototypes. 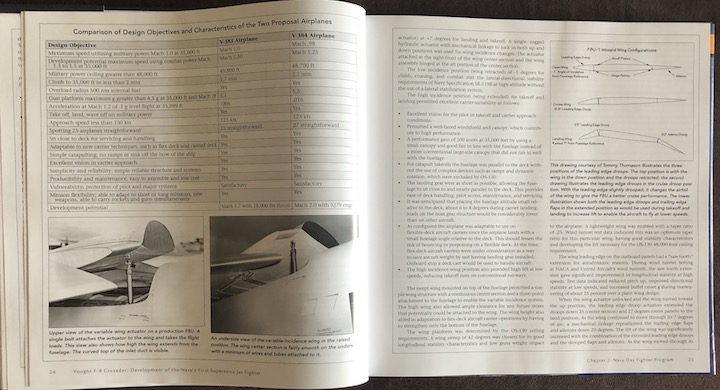 If you know your Crusaders, know that Spidle does cover the V-383/F8U-1 derivative, the smaller V-384, and also the one and only F8U-1T two-seater which fatally crashed in 1978. Also, there are drawings and paper airplanes and a whole lot of minutia you won’t have seen before unless you are a regular at the Vought Archives. The author’s research in the archive to which he seems to have had unprecedented access (he also helped evaluate and catalog its holdings) is in fact the book’s strongest suit. Also commendable, and relevant to anyone interested in aircraft procurement and the strategic analysis that (should) precede it, is his detailed exposition of what the government expected of a new single-engine, supersonic, carrier-based air superiority jet aircraft in 1952. 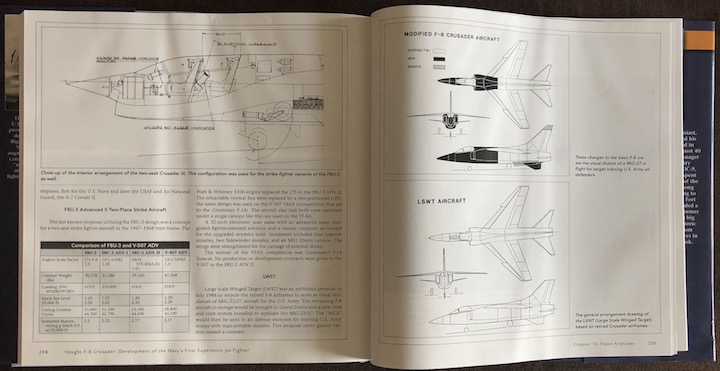 On the technical side it is of course the F-8’s wing that made the textbooks: not only high-mounted which is unusual for a fighter but it is a variable-incidence wing (not to be confused with variable-sweep wing) which led to a host of unusual features and systems. Not least, its aerodynamic properties gained the F-8 the Collier Trophy in 1956. 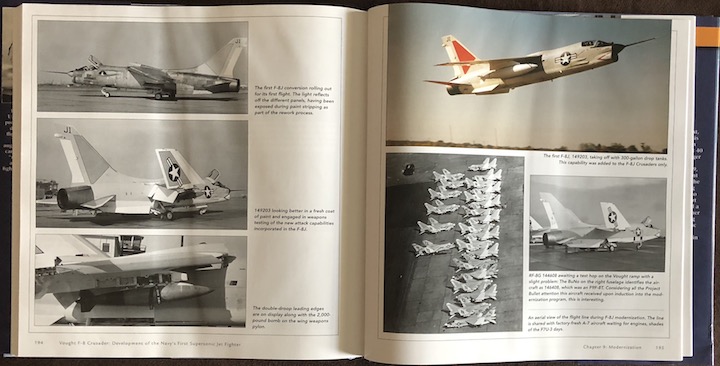 In every regard this book is a worthy addition to the literature and on the illustrative side offers utterly new material. Also, modelers who know what to look for will spot many useful details in regard to kit and also markings. End Notes, Index.

Something New Under the Sun, The History of America’s First Car »
« Mr Radley Drives to Vienna