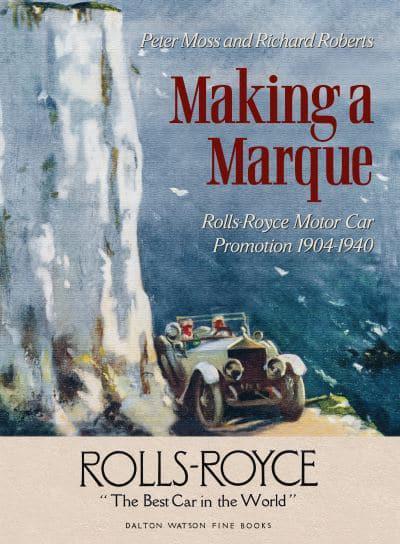 by Peter Moss and Richard Roberts

“But Rolls-Royce in 1904 were mere pretenders. Many marques were already famous: Panhard, De Dion-Bouton, Mors and Renault in France; Daimler and Napier in Britain; Benz and Daimler in Germany; Minerva in Belgium and F.I.A.T. in Italy. Quality was not enough for success.”

Only the uncouth refer to Rolls-Royce cars as “Rollers.” Purists are aggrieved when they’re not called “Royces.” Each is an expression of an entirely different world view; and world view and lifestyle take us into the realm of advertising.

You may not bother to burden yourself with having an opinion about Skoda or Acura but you do have one about, or at least a reaction to, Rolls-Royce, not necessarily the actual car, which for most remains in the realm of the unattainable, but because of what the name represents and implies. 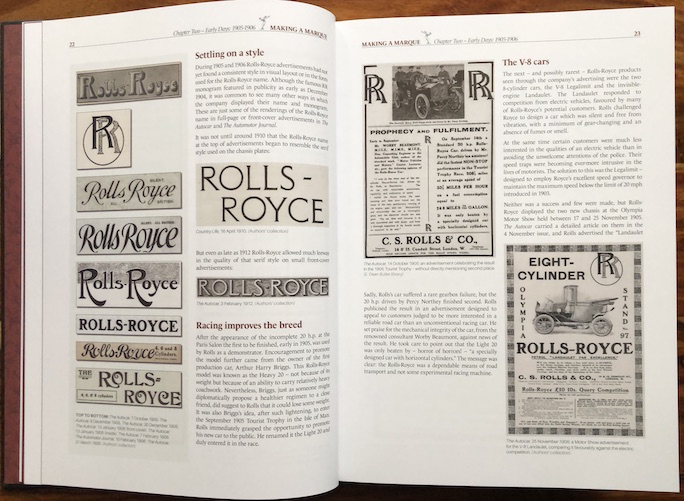 This book is an exceedingly thoughtful, detail-rich analysis of how Rolls-Royce presented itself to the world, first as the proverbial upstart that no one had ever heard of, with everything to lose, and then increasingly as the ultimate standard to beat, a level so high that the mere expression “the Rolls-Royce of xyz” attained the universally understood halo effect of signifying best of the best. (And the firm’s trademark attorneys happily take dozens of people to court every year for trying it.) 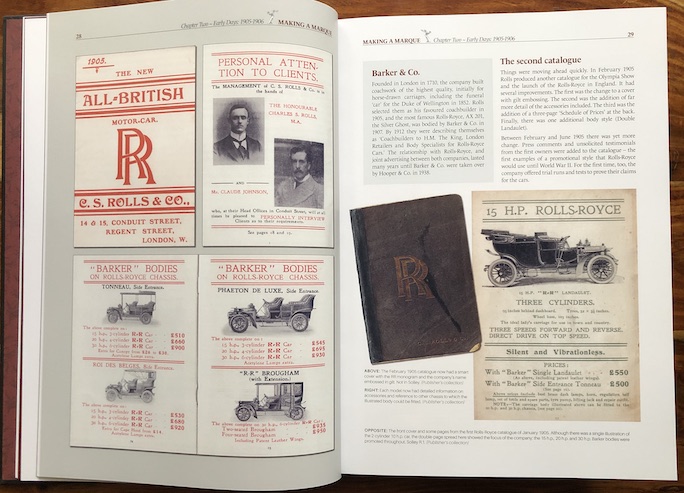 If you’ve ever tried to sell anything, you know you have to understand your market and speak its language. The more exclusive your product, the smaller that market becomes, and the greater the chances of not connecting. Rolls-Royce has not only survived for more than a hundred years but consistently remained the king of its particular hill, meaning someone must have had a good read of the ways of this rarefied ultra-luxury niche market. That latter aspect is why this book will not merely appeal to the marque—or marketing—enthusiast but to anyone with an interest in the forces that shape society. 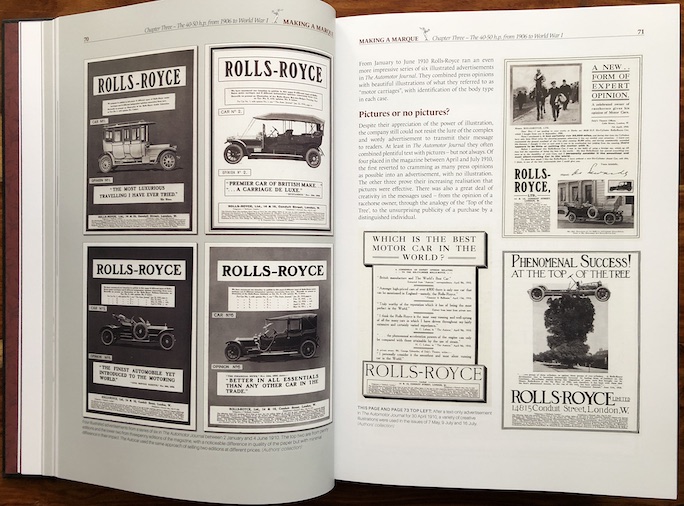 Moreover, the book doesn’t just examine what Rolls-Royce said about itself, which could just be so much hot air, but what the world—the press, dealers, customers—had to say about it. It was always important to Rolls-Royce, most especially so in the beginning, not to make boastful claims, even if they were perfectly verifiable, but to let others blow its horn and then use those “testimonials.” 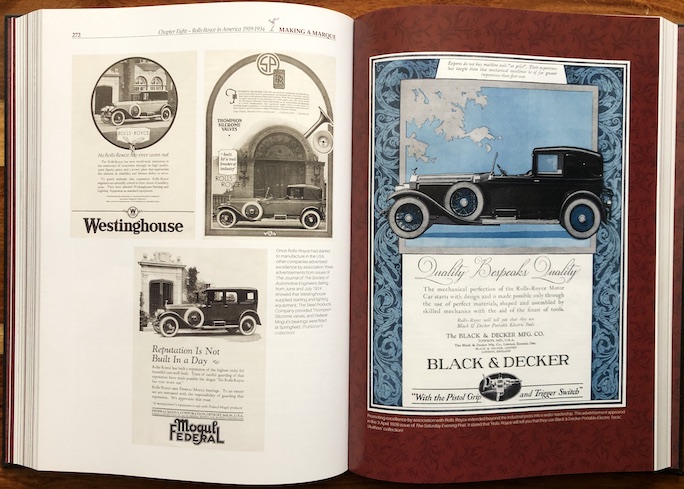 Rolls-Royce cars and people (i.e. staff and also ownership trails) are almost uniquely well documented and the surrounding source material and secondary literature is correspondingly vast. While Rolls-Royce insiders are all too aware that there have been periods of corporate tardiness during which troves of archival material were relegated to the dumpster, Rolls-Royce historians have not run out of ways yet to tell and retell the story from all sorts of angles.

Authors Moss (a chemical engineer and industrial consultant) and Roberts (a mechanical engineer who branched out into IT) themselves are collectors of ephemera, not least in their role as trustees of the Richard Roberts Archive, a collection of magazines and their advertisements from the early days of motoring to the present. A good deal of the material shown here is drawn from it. Other sources have contributed or been consulted, all names firmly established in the Rolls-Royce community, chief among them the late US literature collector Thomas Solley. His 1991 catalog Rolls-Royce and Bentley (1931) Sales Literature, 1905–1965 (ISBN 978-0962942501) has become established as such a high-level reference work that its methodology for denoting sources by a letter code is being used here; in the fact the catalog is usually simply referred to as “[the] Solley.” Of note, Solley also penned the basically related 2008 book Prestige, Status and Works of Art: Selling the Luxury Car 1888–1942 but neither work is as fleshed out in terms of overarching, connective narrative as this Moss/Roberts opus, which, really, is a proper magnum opus in terms of how richly it encircles its subject and how richly the contents is designed and presented. 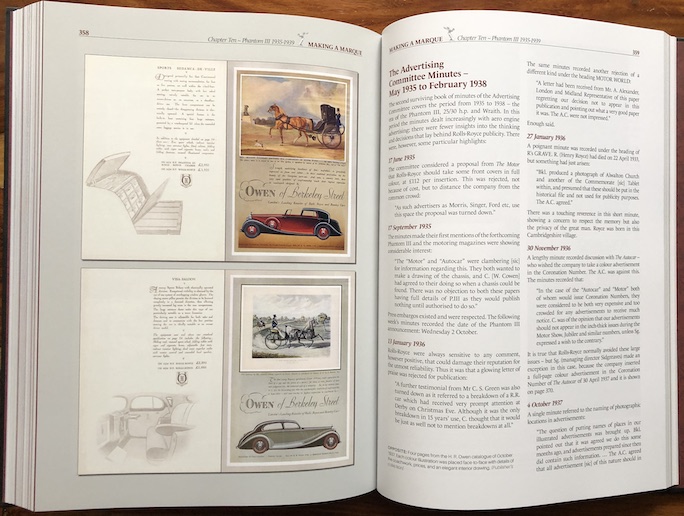 A book like this can be a hit on many levels and for many readers with different needs/interests. For some it will do nicely as merely a quick visual overview; it is also a fully competent basic history of Rolls-Royce during the era it portrays, including also the Merlin aero engine and the firm’s US operation; and on the nano detail level this book will connect new dots for even seasoned R-R specialists. (To point out the obvious, the book concentrates on only Rolls-Royce cars even though the company acquired Bentley Motors in 1931; of the latter only the 8L model is referenced here because it was positioned as a direct competitor to the big Rolls-Royces.)

To illustrate the level of magnification the authors bring to bear, consider this: there are people whose avocation is the identification of Rolls-Royces in vintage images, not just the model—anyone can do that—but the specific chassis number. They look for, say, the shape of the hood louvers or door handles, the sweep of a running board, the rake of a windscreen, or UK registration numbers. Here the authors draw attention to three ads revealing the “strange anomaly” of being doctored insofar as R-R’s artists have changed coachwork features and, yes, registration numbers in the name of telling a better advertising story! This sort of thing would easily be lost on even seasoned observers.

The flavor of Rolls-Royce’s advertising is inseparable from the man who had such a firm hands-on influence on all company affairs that he has become immortalized as “the hyphen in Rolls-Royce,” Claude Johnson who started as manager in 1903 and rose to managing director. (Speaking of people who play a “connecting” role, the book’s dedication page singles out “Sue—our Henry Edmunds,” a reference that will only make sense to you if you know that it was Edmunds who introduced Rolls to Royce thus setting in motion all that followed.)

From the patterned endpapers to the inspired choice of (unusual!) fonts, the book is a joy to behold, with luxurious paper and top-notch image reproduction. There’s even an Index, short but entirely suited to the task and clearly composed by someone who thought about what would matter most to the reader.

by Peter Moss and Richard Roberts

Rolling Sculpture: A Designer and His Work »
« Go Fast or Go Home: The Garth Hogan Story