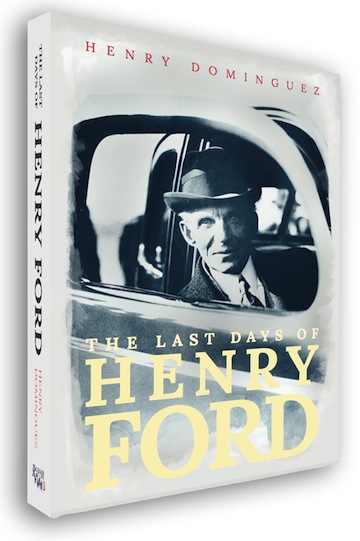 The poignant photo on this book’s dust jacket sums it all up. It shows an 83-year-old Henry Ford peering out at the world from the passenger side window of a Ford sedan. His left eye looks old and tired, his right eye narrowed and crafty. Half his personality still sharp and piercing, half unfocused and drifting. To quote author Dominguez, “Ever since his last stroke, two years earlier, Henry had been despondent and lethargic, not knowing where he was, half the time. But this morning [his last day] he seemed to be his old self again—lucid and energetic. Everyone was amazed and delighted.”

On the last day of his life Ford started his morning by visiting his mistress, Evangeline Dahlinger, then worked briefly as overseer for the men installing a replacement electrical balancing set in his private Fair Lane powerhouse. From the comfort of his chauffeured car he examined the local flooding and storm damage, reveling in taking charge wherever the opportunity arose, seemingly being intentionally cantankerous just to test the loyalty of those around him. Operating outside the established rules and expectations of behavior seemed to give him great pleasure. He visited his favorite grandfather’s grave, reminiscing to his chauffeur about his positive relationship with his grandfather, and how his grandfather believed in his abilities long before they became evident to anyone else, including his own father. Henry then visited the small Ford family cemetery, musing about being buried there.

He returned home at the end of the day to again check on the men struggling to power up the water-driven DC generators that provided old-fashioned 1890s-style electricity throughout his 1,400-acre estate. The phone lines in his house did not connect to the outside world. His mass production assembly lines may have changed the world, but Henry Ford had not changed with it. He was a man of tremendous wealth who remained rooted in the 19th century, mentally holding on tightly to an idealized frozen-in-time version of his early years.

Because the power to his house was still out, Ford made ready for bed by the light of candles and oil lamps. He leaned over to fluff up his wife’s pillow, as he had done a thousand times before. This time, the effort of bending over and fluffing her pillow caused a blood vessel in his brain to burst, and he started coughing. He died within the hour. In his suit pocket he had a Jews harp, a comb, and a pocketknife given to him years before by his illegitimate son, Johnny Dahlinger. The night Ford died, his wife Clara ordered Evangeline Dahlinger’s bedroom safe cleaned out of all the cash inside and quickly retired her from the Ford payroll. Ford’s mistress and their son Johnny, living for years on their own estate two miles up the road from Fair Lane, were no longer to be tolerated. 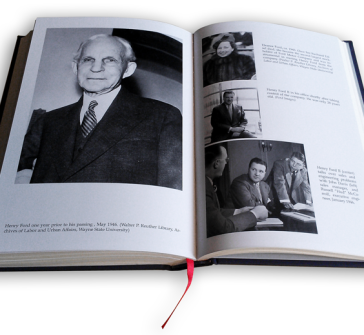 Although concentrating on the days immediately before and after Henry Ford’s death, the book broadens itself here and there to clarify background events that shaped Ford’s last days. The photos are grouped into three stand-alone sections rather than placed in the text. A single color photo, the only known color photo of Henry Ford ever taken, and the last photo of him while alive, is cleverly reproduced as a bookmark. It shows Ford leaving a family gathering the day before his death. He seems to be smiling, his eyes dark shadows hidden from view.

The Last Days of Henry Ford is a recreation of events based on quotes from family and staff members, employees, colleagues, and friends. They paint a portrait of an old man lost in a dreamscape, who frequently followed his wife Clara “around like a child.”

Prior to writing this book, Dominguez, a member of the Society of Automotive Engineers, the Society of Automotive Historians, and the Henry Ford Heritage Association, wrote two other excellent books about the Ford Motor Company from the perspective of Henry Ford’s son, Edsel. His 1999 book Edsel Ford and E.T. Gregorie covers the design team that created the classic Fords of the 1930s and 1940s, and his 2002 book Edsel, The Story of Henry Ford’s Forgotten Son takes the Ford story up to Edsel’s untimely death at age 49. This latest book completes the saga with Henry Ford’s death in 1947, followed by his wife Clara’s death three years later.

The book reads like an on-site narration, with quoted conversations carrying the action, and the narrator the story line. Like all of Dominguez’s books, the text flows unobtrusively, working-in historical facts effortlessly in a smoothly flowing chronicle. Well written and organized, it leaves the reader satisfied at the end. Touched upon, but not emphasized, is Henry Ford’s mildly scandalous sexual situation with his mistress, and the government’s concern with how a huge privately-owned global corporation like Ford Motor Company was being run during World War II by an autocratic Henry Ford, dazed and confused, at the helm.

As is usual with a Racemaker Press publication, the book is a quality hardback wrapped in a tastefully executed dust jacket. Also available signed by the author, in slipcase and with with pull-out color photo of Henry Ford, and the Ford family tree ($65).

Posted Under: Automobiles, Biography/ Autobiography, US | Author: Bill Ingalls | No comments yet

German Aircraft Instrument Panels, Vol. 2 »
« The Roycean: From Manchester to Crewe, via Derby, No. 6