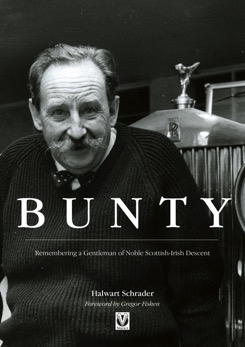 “Parted-out Rolls-Royce limousines scattered the entire property, ankle-deep mud in the stables from which curious goats wearily eye the visitor, and two naked boys frolicking in a pond near the ruins of an outbuilding. ‘Is this how the landed gentry lives??’ asks Bill Boddy.”

Chances are, if you are of, ahem, a certain age, that you have crossed paths with this self-styled “gentleman of the best Scottish/Irish stock,” especially in the Rolls-Royce/Bentley world. “Bunty,” so named by an uncle and for no apparent reason, also styled himself the world’s largest dealer of used cars of these marques, going so far as to sport their logos on his letterhead even though he was not an appointed agent. (Mercedes, another favorite marque of his, finally made him remove the Star in 1974.) Self-deprecatingly he also called himself the world’s poorest Rolls-Royce dealer, and neither of these boasts is without foundation.

When we reviewed the German version in 2014 (ISBN 978-3942153218) we said right away that an English translation would find a ready market. Well, in 2019 it finally happened, in another example of UK publisher Veloce taking on a title from German publisher Monsenstein.

That Bunty’s legacy looms large is evident in the fact that even today, more than a quarter century after his death in 1987, the name of David William Hardy Scott-Moncrieff shows up in the automotive press on occasion. That an entire book should be dedicated to this colorful man is not surprising but the timing and the language (of the original) are. As to the former it is perhaps noteworthy that several such auto/biographies have been released lately, recalling the spate of barn find books that all seemed to come out of nowhere some fifteen years ago. As to the latter, that this most English of car dealers should not have found an eager English publisher right at the outset is most peculiar, especially considering that it was the protagonist’s long-time and long-suffering secretary and confidante, Hazel Robinson, who was the first to shop her own, English-language manuscript around. It’s title Would You be a Sweetie? would have sounded eerily familiar to anyone who had found himself on the wrong end of one of Bunty’s seemingly impossible to resist entreaties for often outsize favors of which repayment was highly unlikely.

Hazel Robinson’s acquaintance with Bunty predates the author’s by only a few years and, to acknowledge her role in gathering material for what was to be her own and is now his manuscript, Schrader dedicated his book to her—do read the dedication! The German version contained quite a bit more about her in the author’s Foreword which in the English version is replaced by one from car dealer Gregor Fisken while Schrader’s comments appear in severely condensed form as an Epilogue.

It is not a conventional blow-by-blow biography but an assortment of 65 vignettes in loosely chronological order introduced by four reminiscences from around the 1970s as a mis en scene. Schrader is a widely published author/editor in automotive matters and vintage-car owner, ran his own publishing house, and his book On the Rolls-Royce Automobile won the AACA’s 1988 McKean Award.

Bunty, who had written several very, very engaging automobile and travel books (and, living up to every Scottish cliché, would have been singularly qualified to write “100 Ways to Explain How You Misplaced Your Wallet”), was a life-long diarist and the book draws on these and his letters; Robinson’s trip, business, and personal memos; and the author’s own recollections, and interviews with or correspondence from “associates, accomplices, friends, victims, and witnesses.” Many stories exist in multiple versions, such was Bunty’s penchant for the theatrical—many thought he would have made a fine actor—and it falls to Schrader to distill that version that he thinks is closest to the truth.

Factual, literal truth is not really the point here. Bunty fully and unabashedly believed that a story well told—be it about something he had experienced or an “embellished” history of a car he was selling—was a perfectly valid means to accomplish an end, that end being to present himself and his wares as utterly irresistible and unique and the listener/prospective buyer lucky to be alive to be blessed with this munificence.

He liked selling cars, especially Rolls-Royces, often mediocre ones and at grotesque mark-ups, to Americans because they often bought sight-unseen and were thus gullible. He also owned some of the storied cars of his time, such as Count Zborowski’s Chitty-Chitty-Bang-Bang II which he had to sell at a loss to cover yet another car deal for which he had pocketed the money, as was his wont, before he had an actual car to sell!

Early on in the book Schrader poses the question: would you buy a car from this shady but oh so lovable character? Clearly people did, over two hundred attended what was supposed to have been his 80th birthday party but became his funeral, and he stayed in touch with many school chums throughout his whole life. What force of personality did he possess to pull this off??

The book does not, cannot answer that question—but it’s plenty entertaining! Let’s just hope it won’t be held up as an example in Business Ethics class!

Simply Bev . . . “Determination is Everything” »
« Reid Railton, Man of Speed