The Art of the Airways 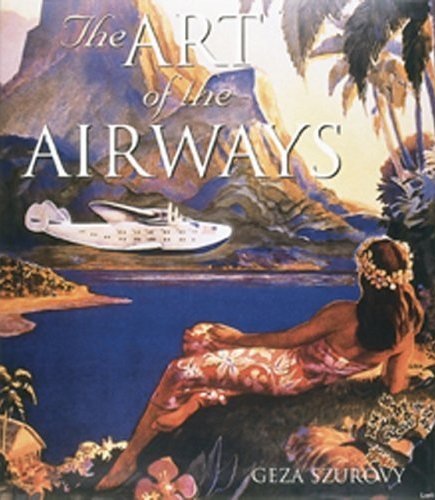 “According to the London Transport Museum, a poster using eight colors and printed in 1,000 copies required 8,000 separate workshop procedures and took several weeks to produce.”

See, already you learned something. And did you know that the world’s first airline was the St. Petersburg-Tampa Airboat Line? There’s much, much more in this book than just pretty pictures!

Award-winning aviation journalist Geza Szurovy has had a life-long love affair with airplanes and he’s even a pilot himself. And because he thinks about the world and the place of everything in it, he connects some interesting dots. From the travel poster designer’s point of view all the artwork has to do is just that: connect dots on a map in an emblematic manner. You look at the poster and you can tell more or less with a glance where you are, or where the airlines want to lure you to—using their air service of course. When Szurovy looks at a travel poster he sees “surviving aviation artifacts and the social history they represent.”

While he doesn’t talk about this specifically, there is an entire academic discipline called Cultural Geography whose interest is in understanding how images can be used to construct “place.” All quite obvious, when you think about it. But even beyond place as a physical spot on the map clothes, paraphernalia, and depictions of interaction (male-female, tourist-“native”, dominant-subservient etc.) also say something about place in the sense of the protagonists’ chosen or assigned metaphysical spot in the food chain that is the world of man. Even in merely geopolitical terms there’s much to tingle the mind here: look, to pick just one random example, at the 1936 “Belgian” Congo poster and ponder the implications of there being no such thing any more or how the global pie got to be divided that way in the first place.

The generously sized 10 x 12″ book shows posters from 1914 to the close of the 20th century. They are sourced from museums and airline archives (Air France is the largest such, with over 350 posters), individual collectors, and of course the author’s own collection. They are reproduced splendidly well and reproduced on substantial glossy paper. Not all posters avail themselves of all the available space on a page. This is possibly a function of their original format not lending itself to proportionate scaling and covering the page fully at the same time. All are extensively captioned, describing the scene, the destination, the airline or aircraft or the like. A few of the posters show cutaways (of the low-tech kind: they peel back the skin and show the cabin etc.). Many pages will show at the bottom outside corner a b/w photo of the same aircraft that is drawn in the poster, or absent an aircraft another related, relevant scene. A clever idea but, of necessity, these photos are rather small. Incidentally, the vast majority of posters are drawings, not photos.

The book is divided into four chapters, each covering a distinctive era which each being introduced with several pages of illustrated commentary. The overall layout and typography show cleverness and sensitivity and the color choices are thoughtful, not at all easy to do in a book that is so full of color. The endpapers show route maps, 1950s KLM in the front and 1937 Air France in the back. The Index is short but sufficient given the ratio of text to illustrations. The collector would probably have liked to see an index of illustrators (if you know the names there’s work here by P.G. Lawler, A.M. Cassandre, Jean Carlu, E. McKnight Kauffer, Nathan, David Klein, Villemot, Stan Galli, and even cartoonist Jack Davis), as will as size of original.

It may take weeks to print one of the old-style posters; it’ll take you that much and longer to look at them again and again. First of all, though, look at the price and then thank your lucky star that no one has thought of adjusting this 2002 price for inflation yet! You could even buy a second copy and, gasp, cut it apart to frame some favorite images.

Also available as an Amazon Kindle Edition, 10870 KB, $39.95, ASIN: B003U6ZOQQ. But why bother? This is exactly the sort of book that demonstrates why e-book technology is not a satisfying substitute for certain kinds of books.