T.E. Lawrence in War and Peace: An Anthology of the Military Writings of Lawrence of Arabia 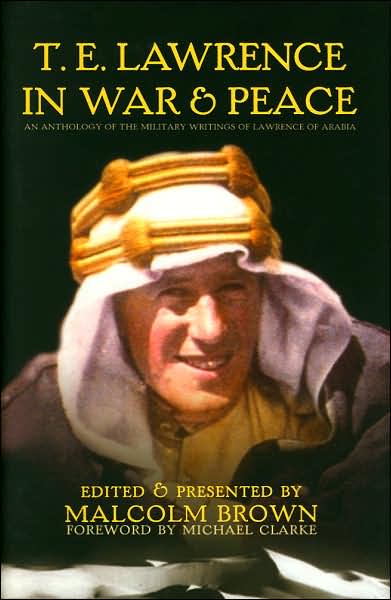 “Do not try to do too much with your own hands. Better the Arabs do it tolerably than that you do it perfectly. It is their war, and you are to help them, not to win it for them. Actually, also, under the very odd conditions of Arabia, your practical work will not be as good as, perhaps, you think it is.”

It may seem unimaginative to use here the same quote the book’s back cover uses but it is a very good quote, not just because of the quality of the observation but because, short as it is, it contains important qualifiers—that, if omitted, rob Lawrence’s thoughts of relevance and applicability. It is, as author Malcolm Brown knows well enough, an altogether irritating fact that Thomas Edward Lawrence is quoted more often than actually read in context. His very verbosity, not to mention his often ornate writing style may well cause modern eyes to glaze over and only latch on to certain salient remarks that, if read in toto, may well have a different thrust.

This anthology, therefore, offers the reader certain primary sources (not all by Lawrence’s hand), quoted in full. Much of this material would find its way into his magnum opus, The Seven Pillars of Wisdom, first published in 1926 in an exceedingly limited subscription-only edition and not produced in quantity until after his death in 1935. While previous anthologies have presented the hundreds of personal and official letters Lawrence wrote (Brown did one in 1988), his secret 1916–18 wartime dispatches had only been published once—and that too was in a very small edition with, today, commensurately astronomic prices—before Brown in 1991 compiled a “mass-market” edition. Even reproduced full-length the dispatches run to only about 60,000 words, making for either a smallish book or offering the opportunity to amend the material. The difference between the 1991 book, which is only available on the secondary market anyway after all unsold copies were destroyed when its publisher folded, and the present one is that additional material. And the reason for that is that the world since 1991 has not only changed radically but in the very corner of the world in which Lawrence had once been the tip of the spear for the very changes in which the genesis for today’s tumult lie.

Among the multitude of commentators and interpreters of Lawrentiana, Brown surely is one of the Pillars of Wisdom whose immersion into the subject makes possible nuanced and insightful analysis. He has written repeatedly and meaningfully on the subject. More than ever, events since the first Gulf War have assigned Lawrence the role of poster boy when it comes to thinking about guerrilla warfare, insurgencies, the dynamics between irregular/rebel forces and a conventional organized state-sanctioned army (in Lawrence’s case Bedouins vs. Turks and later Germans). Pillars has become, as Professor Michael Clarke of King’s College London where he directs the International Policy Institute says in his Foreword, “an oft-consulted work among military officers presently struggling with the attempt to create order in Iraq.”

As the title indicates, the book is divided into two parts, war and peace, and the dichotomy between the two, most particularly for Lawrence for whom this was not a sterile academic matter but an existential one. Brown’s role in this book that of “playing the role chiefly of a guide but also, occasionally, that of a modest barrister pleading, or perhaps sometimes not pleading, [Lawrence’s] cause. The juror is the reader.” Part 2, the Peace part, consists of news articles, letters and memos and the like from the difficult and challenging time following Lawrence’s return to England in 1918 (plus one item from 1929). “In the majority of cases we see here a campaigner strenuous in combat, fighting with words rather than weapons for the cause with which he had identified himself from the moment he set foot in Arabia: justice for the Arabs.” A properly multi-faceted picture emerges, with Brown having a firm grasp of the pros and cons and lows and highs. Despite Lawrence’s undeniably salient insights into the human condition he was also, as anyone who feels misunderstood or pressed to justify himself, cagey and was not above framing the story in a way that supported his views.

All photos are b/w and bundled into a stand-alone 8-page section. The period maps are adapted from the 1935 edition of Pillars. Appended are abbreviations, chapter notes, select bibliography, glossary, and a thorough index.

Lawrence’s life and his campaign yield rich photographic material and the publisher of this title also distributes an August 2012 book by Andrea Press, T.E. Lawrence and the Arab Revolt by Joseph Berton (ISBN 9788496658356) containing many rare and unseen photographs.

T.E. Lawrence in War and Peace:

An Anthology of the Military Writings of Lawrence of Arabia