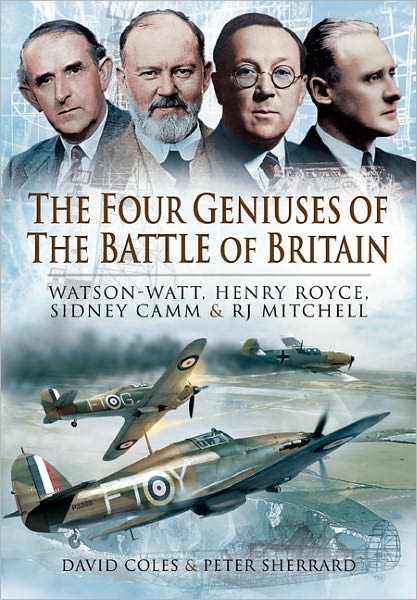 “There are unexplained mysteries in our recent history that need exploring. Instead of moaning about wrongs and omissions, let’s be surprised and truly delighted about the brilliant things that were done, when it was so easy for lazy folk or untutored financiers to strangle them at birth. Surely this ought to have a bearing on what we as a nation can do nowadays? So, let’s look at our history again.”

Short though it was, the Battle of Britain proved decisive in swinging the actual balance of power and, as importantly, morale. It had many heroes, on the field as much as the drawing board. Among the latter, the four men whose work is presented here do deserve especial consideration. Each devised equipment that remained novel long enough to gain and maintain the lead.

Robert Watson-Watt is the man to whom Britain owes radar and Henry Royce’s legendary Merlin engine powered the Hurricane and Spitfire designed by Sydney Camm and R.J. Mitchell respectively. Each man did much, much more over the course of their professional lives but these are the things for which they are singled out in this book.

Being written by two retired Rolls-Royce aerospace engineers means the authors are technologists more than secular historians. This is most evident in lead author Coles’ Foreword in which he offers “a new slant on history” in the form of a peculiar tribute to Prime Minister Neville Chamberlain (best known for his policy of appeasing Hitler by signing the 1938 Munich Agreement instead of opposing Hitler’s annexation of the Sudetenland), crediting him, during his time as Chancellor of the Exchequer (equivalent to Secretary of the Treasury) in the early 1930s as having the foresight to invest in new British fighter designs! This is a rather unorthodox take on history.

Sherrard, who wrote the much shorter Preface, avoids this and instead stays on-topic by discussing two aspects entirely pertinent to his two chapters: the Herculean efforts by Rolls-Royce’s Ernest Hives (H. Royce had been dead for years when war broke out) and the similarities between Royce and Mitchell.

Each author took on two of the subjects and to each principal is devoted one chapter of 35–50 pages presenting basic biographic information, a summary of their work, and the Battle of Britain-specific contribution. The first chapter, on Watson-Watts’ radar achievements, is the most “technical” inasmuch as it makes use of schematics. These neither have captions nor legends and although the text does refer to them extensively, the reader who is not an electrical expert will labor to understand them. Nevertheless, the book makes clear that his early experiments and understanding of future capabilities and concerns were instrumental in giving the RAF a brilliant early warning system that also owes much to Air Chief Marshal Sir Hugh Dowding when he was in charge of RAF Research and Development.

Sherrard’s chapter on Henry Royce reminds us that even in the class-conscious Victorian and Edwardian eras, a man could overcome serious social hardships to rise to become a world-famous industrial leader—although it must also be remembered that without the halo effect of his business partner’s name (Charles Rolls, that pioneering balloonist, aviator, and motorist of noble descent and socially connected), Royce may well have had to continue in obscurity no matter how technically refined his products. Rolls, of course, has the tragic distinction of being the first Briton to die in an aviation accident but in that very mishap lie the origins for Royce’s however reluctant “interest” in aviation technology that, over the course of the ensuing years, would place Rolls-Royce at the pinnacle of aero achievements. Among other things, his work would win for Britain the Schneider Trophy, leading to the gestation of the famous Merlin engine that would come to power the last two subjects of the book, the Hurricane and Spitfire fighters.

Sydney Camm rose through the ranks to become Chief Designer of Hawker Aircraft with a string of successful biplane designs. It was inevitable that his next design was to be a monoplane fighter that reflected the increasing performance demands. The Hurricane did everything that was expected of it and Coles’ chapter describes the critical importance of the timing of its appearance in the fighter squadrons in the late 1930s, replacing the biplane fighters prior to the Battle of Britain. It is indeed ironic that the Hurricane’s first flight paralleled that of its future WWII adversary, the Messerschmidt 109.

Reginald Mitchell’s name is automatically linked to that of his beautiful aeroplane, the Spitfire and its predecessors, the famous Schneider Trophy seaplanes. Sherrard relates stories of early development problems, the need to productionize the elegant and advanced design, not forgetting the rush to deliver sufficient fighters to meet the demands of the Battle of Britain.

And then there is a fifth chapter . . . which seems quite irrelevant in that it has nothing to do with the four men or the Battle of Britain. It covers several German terror weapons that only saw action, limited at best and in some cases not at all, years after the BoB. The V1 and V2 flying bombs were used operationally, and relatively successfully, but the V3 Supergun was never fired in anger. Stranger still, Coles also discusses the Horten flying wing—which never flew; if his intent was to draw attention to the quality of German technology, the Me 262 jet fighter would have been a much more apropos choice.

The Bibliography unaccountably omits a book that is extensively quoted in the body of the text: Stanley Hooker’s very worthwhile biography Not Much of an Engineer. There is one 8-page stand-alone section of b/w photos. The Camm chapter includes 11 b/w scale line drawings of shockingly poor quality of Hurricanes; they look like 10th-generation photocopies. Index.

While on the factual level the book adds nothing substantially new to the record, by bringing together these four men it puts into sharp focus the factors that contributed to success in the Battle of Britain.

The Four Geniuses of the Battle of Britain: