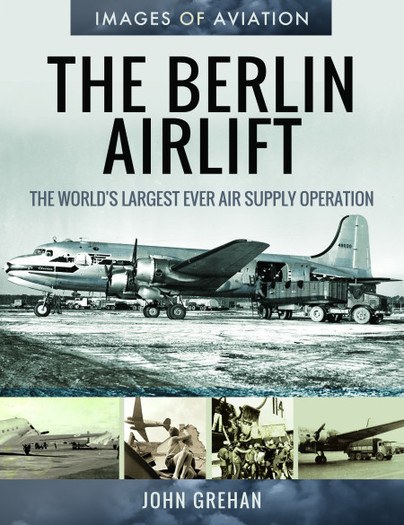 “On the 25th, the Soviets stopped the delivery of food to the non-Soviet zones of the German capital. They also cut off the western zones’ electricity supply. Berlin became a city under siege. More than two million, in a city barely recovering from the devastation of war, faced starvation, or, in the words of General Clay, abandonment to totalitarian domination. It was a stark choice.”

This one paragraph is indicative of the make-every-word-count prose that distinguishes this book.

Throughout, using many quotes, it makes the point directly and indirectly that you had to have been there to grasp the fullness of the despair and deprivation, the abysmal suffering of 2.1 million people in a city reduced to utter rubble, marooned on what effectively had become an island surrounded by the enemy. Some 1.7 million of them were still homeless three years after the war had ended and this story begins.

This publisher’s “Images of Aviation” series does just what the title implies. Often, the photos carry what story there is, which is on the one hand impactful but on the other leaves the reader to go sleuthing for context and background on their own. This book, however, small as it is, contains a lot of well-honed narrative to bring even the reader who has never heard of the Berlin Airlift up to speed. 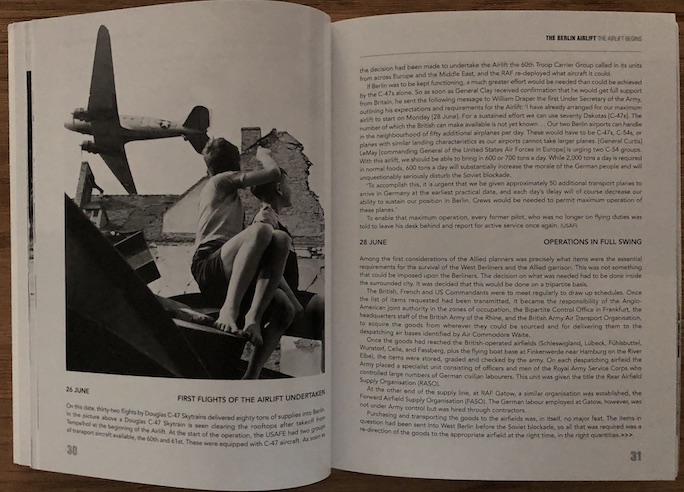 Books can’t all begin with Adam and Eve or the Big Bang. This one picks up the story in May 1945, with the capitulation of Germany and the victors wondering what to do with it. Establishing each party’s motives and choices is one of the few sub-topics this book is simply too small to plumb. This applies especially to the Soviets, whose go-it-alone politics created the logjam to which an airlift was the only answer to prevent yet another war.

It bears repeating: this little book packs a lot of detail about matters that are not at all obviously related to the subject of mounting an air operation. Democracy v communism, a brotherly hand v exploitation, the lesser evil: revenge v forgiveness. While peripheral to the book, it does hint at the quite unfathomable self-imposed burdens the British, war-ravaged and facing crushing economic deprivation themselves, shouldered in the name of fostering peace. You will want to put the book aside often and have a quiet moment to let these concepts gel. 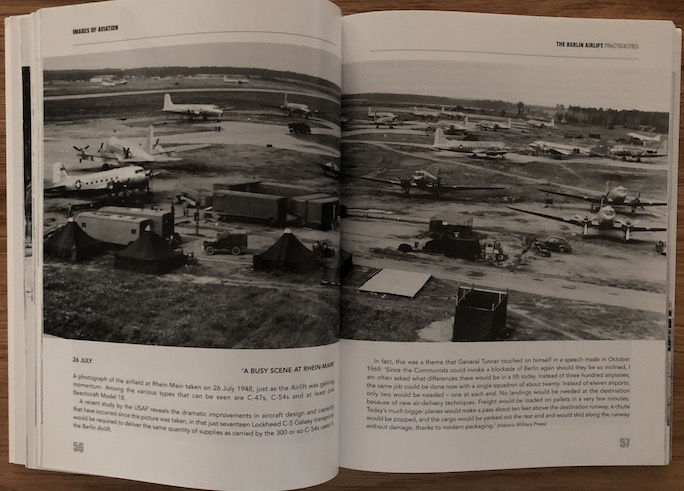 The core of the book covers, obviously, the Airlift itself. Here, now, the story mostly switches to extensively captioned photos, presented in order of week and sometimes day, beginning with June 23, 1948. The last day of flight ops was May 12, 1949 but the book tacks on another few months to reflect on other means of transport (road, rail, water) after the western allies broke the Soviet blockade. Even commemorative events in more recent decades are included, such as the 40th anniversary in 1988. 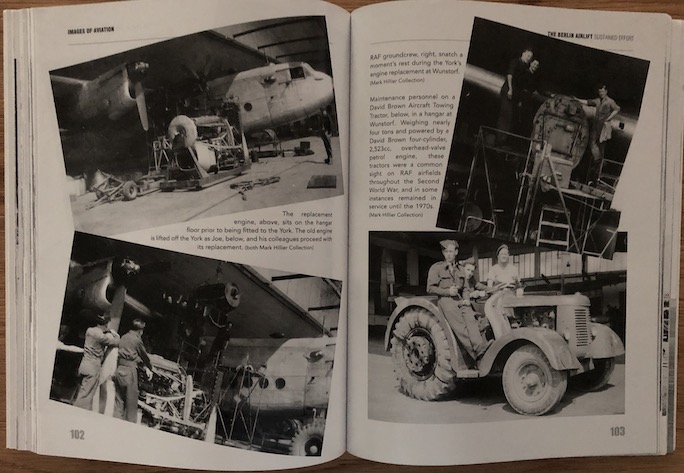 The logistics of the event are staggering beyond words. By whatever unit of measure—cost, tonnage, miles flown, number of aircraft and sorties and personnel—the final tallies exceeded anything ever done before. As important, absent the “benefit” of hindsight, the political gambits military and civilian leaders made are of the highest imaginable order. This, too, is an aspect the book admirably conveys, as it does the unforgettable expressions of gratitude of the Berliners they saved. 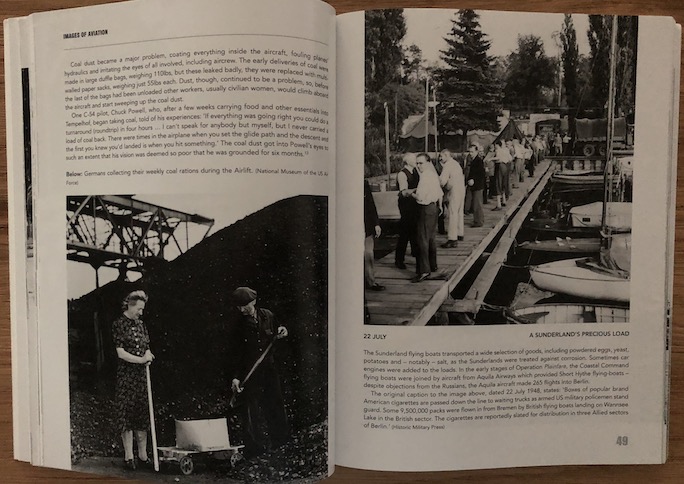 Aviation enthusiasts will of course find images of all the flying apparatus (such as the lovely Avro Hastings that was specifically expedited to flying status; and flying boats!) and also the infrastructure, such as airfields, ground operations, maintenance and, yes, crashes. Planes coming and going every few seconds, night and day, rain or shine. Realize that at some point the minimum flying level was lowered to all of 200 ft, and the visibility limit to zero. Grave risks were taken—all to feed the people you tried to bomb into oblivion a few years earlier. And, once more, the book shows and discusses things that are not at all obvious: how does all the stuff they flew into Berlin get out of the aircraft and into the hands of the actual people? How do you deal with a plane full of coal dust gumming up the hydraulics? How do you build a runway by hand? And let’s not forget the candy drops by parachute (or merely emptying a crate out of the window). Hearts and minds, folks. If this book makes no impression on you…well…

A final note: softcovers have no dust jackets, the place you’d usually find a word about the author. There is nothing here, which is a shame because John Grehan deserves credit for doing his profession proud. He has hundreds of books and magazine articles about military history to his name, co-founded Britain at War magazine, and is nowadays an editor at one of this publisher’s divisions (Frontline Books). If this book cost a multiple of its MSRP it’d be worth it.