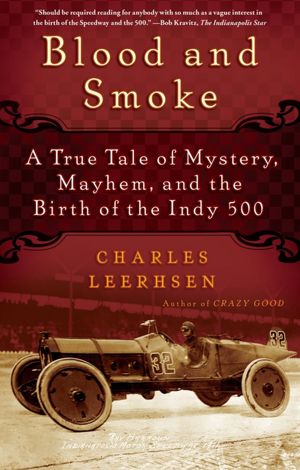 Written for the centennial of the International 500 Mile Sweepstakes, as the “Indianapolis 500” is formally known, in Blood and Smoke the author sets out two missions for the book. The first is “to discover what is possible to know about the first 500-mile race,” and the second “to shed light on the curious and now largely forgotten early automobile racing scene.” These are worthy and commendable missions—that Blood and Smoke manages to fall short of its goals is not in and of itself a reason to look askance upon the book; accomplishing either one would challenge even the hardiest of automotive historians, but there is something in how the author plays coy with the reader that both disappoints and ultimately makes Blood and Smoke unsatisfactory.

The author, Charles Leerhsen, is not an automotive historian, but rather a former editor at Sports Illustrated, People, and Us Weekly. He was a senior writer at Newsweek covering sports for over a decade. In addition to the magazines mentioned, his articles have appeared in Money, Esquire, Rolling Stone, The New York Times Magazine, Money, TV Guide, and Smithsonian. He is also the author of a book, Crazy Good: The Story of Dan Patch, the Most Famous Horse in America. In other words, he is just the sort of person a major publishing house, Simon & Schuster in this case, would turn to for a book about the centennial of a major American sporting event. This is also a basic problem with the book.

According to the author, much research went into the book, the first mission mentioned above. In addition to whatever research was conducted by the author, two graduate students were retained to conduct research. Combined with gathering background material from several familiar names in automobile history and especially the self-proclaimed “Greatest Spectacle in Racing”—such as Mark Dill, J. Michael Kenyon, and Donald Davidson—expectations and hopes for a good effort would seem justified. While certainly a better book in some ways than the all too usual results that find their way onto the bookshelf on the topic of automobile racing and its history, especially the usual plague of jejune prose, Leerhsen’s preoccupation with the “blood” and guts aspect of early automobile racing scene does eventually provoke a bit of eye-rolling and gnashing of teeth. It seems that at times he goes to great, and contrived, lengths to look for ways to incorporate reasons to justify the “blood” used in the title. This is something that Leerhsen shares with many who turn their hand to writing about automobile racing.

Where Leerhsen strays and produces a book that a general reader or a casual racing fan might find interesting and even enjoyable is when he plays coy with the reader, perhaps rather even taunting the reader a bit. This was evident already when Leerhsen promoted the book prior to publication on various Internet sites. In most cases he was received well and tossed a few softball type of questions. When challenged and asked questions more akin to those of the hardball variety, Leerhsen’s responses were rather ill-tempered and quickly led to removing himself from the dialog so as to avoid further probing. Needless to say, this raises eyebrows.

As the record books inform us, the winner of that inaugural running of the International 500 Mile Sweepstakes on Decoration Day in 1911 was Ray Harroun driving a Marmon Wasp solo, the car being equipped with a rearview mirror to save the weight of a riding mechanic. Most of the accounts of that race either fail to mention or only mention in passing that Harroun had a relief driver, Cyrus Patschke, who drove a part of the race while Harroun took a break in the pits. Likewise, few accounts mention that there was a problem with the scoring system for the race, something that is at the center of the Leerhsen account of the race.

Although Leerhsen makes it a point to state that it is Harroun whose name is in the record books and that while that is probably correct, he then proceeds to make the case for someone else being the winner: Ralph Mulford in a Simplex. Others have suggested this in the past, Russ Catlin and Russell Jaslow among them, citing the scoring problems created during the race from both the deficiencies of the scoring system itself and that the scorers and timers were diverted from their task when a wreck threatened to hit their scoring box. Suffice it to say that if given a choice between accepting what Donald Davidson—someone who has literally devoted his entire working life to the study of the race—has to say about the outcome of the 1911 race and what is suggested by Leerhsen, one finds it easy to give the nod to Davidson rather than Leerhsen. At times when reading Blood and Smoke, and then after reflecting upon it, one has the sense that it is often more akin to Truman Capote’s novel In Cold Blood rather the work of nonfiction that Leerhsen often goes to great pains to claim that it is. While this might sound a bit harsh, it is an impression that is hard to shake.

There is no way that, in good conscience, Blood and Smoke can be recommended as anything other than an “interesting read” for the general reader or the casual racing fan. The more one knows, the less there is to like about this book.

My 1001 Cars, The Reference Edition »
« Rolls-Royce and Bentley in the Sunburnt Country: The First Fifty Years of Rolls-Royce in Australia