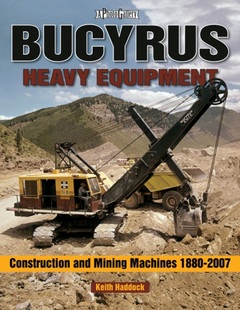 Any kid who grew up reading Mike Mulligan and His Steam Shovel by Virginia Lee Burton (Houghton Mifflin Company, 1939) has a special appreciation for steam-powered construction equipment. Now, Keith Haddock, who 20 years ago co-founded the Historical Construction Equipment Association (HCEA) has written the definitive history of Bucyrus, an American company synonymous with moving earth.

As with most books in the Iconografix Photo Gallery series, Haddock’sBucyrus Heavy Equipment is heavy on photographs. There are more than 450 black and white images of nearly every model steam shovel, walking dragline, floating dredge, crane, bucket wheel excavator and drill that the company produced in its long 129-year history.

Haddock’s first chapter covers 11 pages that neatly summarize the history of the venerable company, with all of the growth and acquisitions of competing companies as well as contractions during lean times and the Great Depression. We tend to take massive earthmoving projects for granted today, but at the beginning of the 20th Century the idea that we could dig our way across Panama to create a canal was both bold and audacious. The success of the Panama Canal was in no small way attributable to the 77 (out of 102) steam shovels, including 32 of the giant 95-ton models that Bucyrus delivered to the project. Name a major construction project in the 20th Century, and it’s a cinch that Bucyrus was there with its heavy equipment.

Following the first history chapter, Bucyrus Heavy Equipment is organized by type of machine and then arranged by ascending size. As the shovels and draglines increase in scale they become larger than life and often end up with a production run of just one or two units. Just as Virginia Lee Burton named Mike Mulligan’s shovel “Mary Anne”, these very special and massive machines often carry names such as “The Silver Spade”, “The Gem of Egypt”, “Brutus”, “Big Hog”, and the biggest ever built, the 4250-W christened “Big Muskie.” The colossal walking dragline began work in Ohio in 1969 and continued working until she was scrapped in 1999 after moving more than 608 million cubic yards of overburden at the Central Ohio Coal Company’s Muskingum Mine.

It’s clear that Haddock’s book is a labor of love for the big machines from South Milwaukee and in the process of producing Bucyrus Heavy Equipmenthe was given full access to the company’s records and photographic archive. The result is a book that provides not only an understanding of the company’s place in construction history, but also an indication of how our ability to move and reshape our landscapes has grown to an almost unimaginable scale.