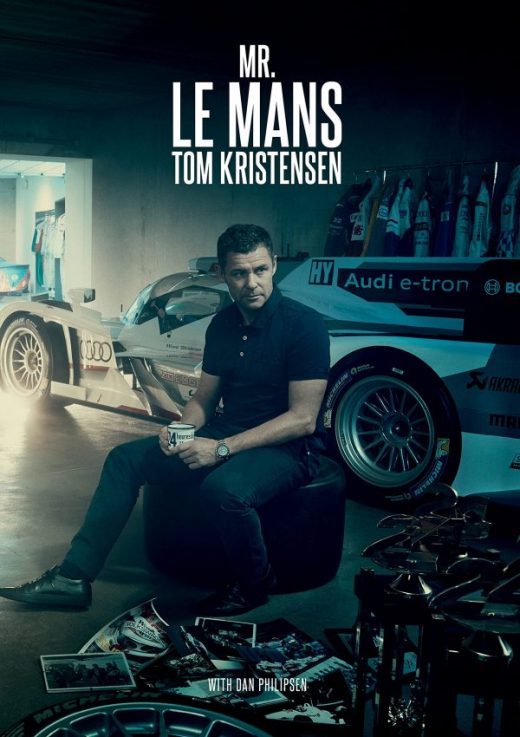 by Tom Kristensen with Dan Philipsen

“Even when we were discussing something else, Tom couldn’t help but take me back into the racecar. Using gestures and sounds, his body would lean to the side as he imagined taking the curves of the world’s great racetracks: we went from fourth to fifth gears on the Mulsanne Straight at Le Mans, we danced across the uneven surface at Sebring, and we glided across the fast rollercoaster curves of the Spa course with ferocious gear shifts and sounds. He held onto an imaginary steering wheel as his mouth spat out lifelike engine sounds. He did it with a schoolboy passion, as if they were describing wheels for the very first time.”

Hold on to that delightful image. The good mood it puts you in will carry you through later on, when the proofreader is letting down the side just too many times.

But, this book isn’t about the finer points of language, a foreign one at that to the protagonist and his co-author/editor, but about the finer points of driving—fast, smooth, precise. You need all three attributes, and more, to be a world-class competitive racing driver. And you need a lot, lot, lot more to be a winning one, and most of those factors are beyond your control. A memoir, if truthful, is a fine way of ruminating upon one’s place in the circle of life. 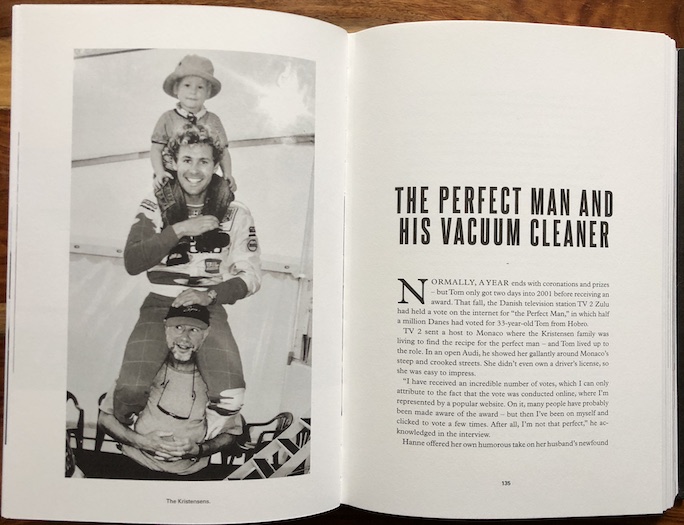 Speaking of truthful, this expanded international edition differs from its Danish original in that it has contributions written by three journalists, in other words people whose job it is to keep perspective. Moreover, two of them have themselves written (and ghostwritten) motorsports biographies. If you are immersed in motorsports reportage you’d recognize their names: Nils Finderup from Denmark (who, quirkily, refers to his countryman throughout as “the Dane”), and Charles Bradley and Gary Watkins from the UK.

The press release refers to the book as a “thoughtful memoir” and it is that. If you are a thoughtful reader you’ll probably pause right at the very first sentence: “Very few people can claim that a particular event defines them as a person.” By the last sentence, you’re surely thinking, and definitely wishing, that that is not true of Kristensen, that he is more grounded, more rounded than to be defined by his success or even by being a racer.

If the book title, “Mr. Le Mans,” alludes to Kristensen being the most successful driver ever on that circuit, another nickname of his alludes to the marque that took him to the top often, “Lord of the Rings.” Think, Audi logo. Born in 1967 he’s been retired since 2014 but remains an Audi brand ambassador. He is also a public speaker, on such subjects as teamwork, of which you will read much in this book. If you don’t have the time to read it in one go, stay with it at least to the end of the second Foreword because it is a singular insightful piece of work. It is by Wolfgang Ullrich, the former head of Audi Sport. If someone who worked with Kristensen for 16 years can call him “not an easy teammate”—and not mean it as a criticism or lament, you know there’s a life lesson in this and not merely fortune cookie wisdom.

If you are a consumer of memoirs/autobiographies you’ll find it interesting that the story doesn’t unfold in a linear manner but starts with a highlight, intersperses what had best be called flashbacks, and introduces outside points of view at opportune moments. This is a long-winded way of saying that the story skips around, even overlaps on occasion but this is in no way a shortcoming but simply a specific and intentional technique. The sections by Philipsen can be distinguished from those by Kristensen by use of a different type size and line width. In collaborative efforts such as this one is never sure if the protagonist’s voice is in fact wholly his own or “polished” by the editor/co-author. Moreover, this is a translation so that too introduces a variable; that said, translator Mark Mussari, a US academic in Scandinavian languages and literature, has proper literary work to his credit so one must assume a finely tuned ear. The reason to dwell on this at all is that this memoir has an unusual non-hyperbolistic tone—none of the shrillness, the soapboxing of the misunderstood, the “campaigning” for bending reality/history a certain way. 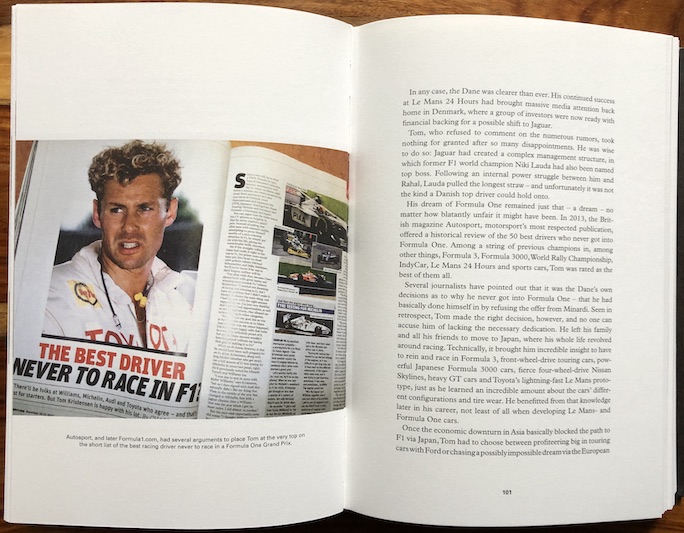 From Kristensen never shaving on race day (not superstition but practicality: one less thing to distract or go wrong on the morning of) to contract negotiations to engineering insights, the ups and downs, the vagaries of luck, the importance of family . . . there is much here to engage the mind and the imagination. There’s no Index so leave yourself a paper trail. Everyone and everything in racing makes an appearance here. Little is said—and, really, why dwell on it—that Kristensen would have liked a shot at Formula 1. Finderup, who has written his own biography of Kristensen, closes his 50-pages-long chapter by saying: “Today, not many people recognize Jacques Villeneuve as being one of the great champions in Formula One. However, everyone knows the name of the greatest legend in Le Mans 24 Hours history.” 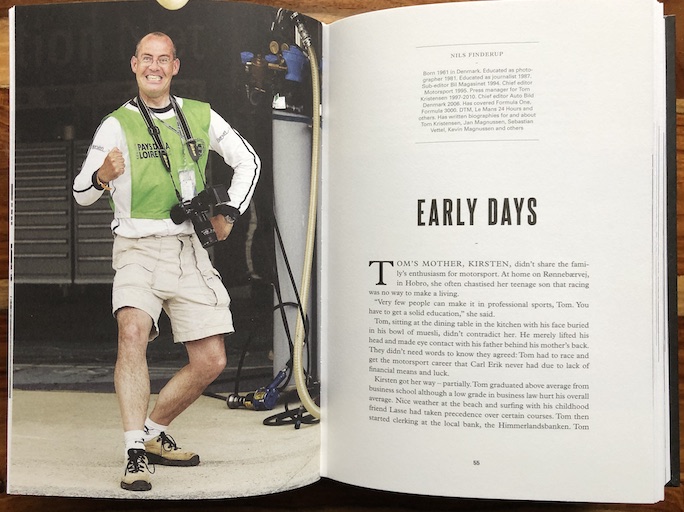 Who wouldn’t have fun with this fellow?? Finderup was Kristensen’s press manager for 13 years . . . too long a time not to suss out what someone is really made of. 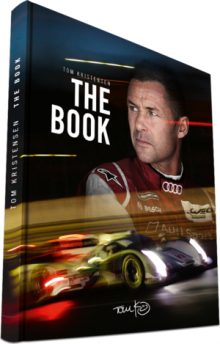 by Tom Kristensen with Dan Philipsen