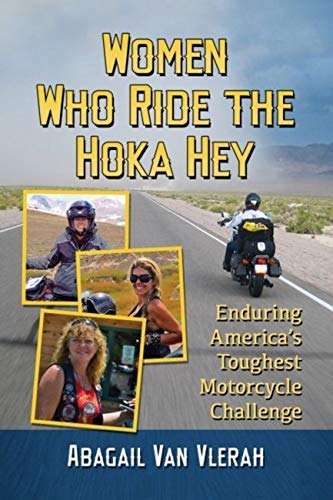 We’re all aware that women own and ride motorcycles. Nonetheless, more often than not it is perceived as a male-dominated activity. And that perception is precisely what inspired this author—a motorbike rider and Hoka Hey Challenge competitor—to write Women Who Ride the Hoka Hey. While Abagail Van Vlerah does relate some of various women’s ride experiences, the real focus of her book is cultural as will be explained further on.

“Hoka hey” is Lakota Sioux translating roughly to “Hurry, hurry” which is precisely what participants in the Hoka Hey Motorcycle Challenge have to do because the prescribed route its riders are expected to complete on any given day can be as much as 1,000 miles. And that travel is mainly on secondary two-lane roads.

For those more oriented to four-wheeled conveyances than two-, think of it as a Great American Race on steroids for a Hoka Hey course is tougher by far. Directions handed out incrementally and sequentially at checkpoints along the way are more ambiguous (not written utilizing or following SCCA rally protocols). There are no meals or nightly stops prescribed or provided, nor are there sleeping accommodations set up in advance, much less showers or even privies. The Challenge tests the endurance (on all levels!) of riders and their bikes with the latter limited to American-made v-twins, so think Indians, Harleys, Victorys, and customs.

The inaugural Hoka Hey Challenge was held in 2010, the next in 2011. The third in 2012 was the first time this book’s author took on the Challenge herself. She also undertook the subsequent Challenge held in ’13 and again finished. That alone is a huge accomplishment as the attrition rate is high. To finish is to win. For 2014 going forward the organizers decided to hold formal Challenges every other year.

Concurrent with participating in the Challenge, the multi-degreed author was working on her doctorate in American culture studies by conducting ethnographic research. The moment that was revealed, your commentator wondered if this book, her first, might have evolved from her doctoral dissertation. Not until many, many pages later was this “hmmm, I wonder?”-guess confirmed. [1]

Some of the most effective passages are what Van Vlerah calls “blended or woven dialogue” which she created by using direct quotes from various interviews she’d conducted with women who’ve ridden in one or more Hoka Hey Challenges. She wove or intermingled them—a sentence from one, followed by a sentence from another and so on—to form the paragraph and make the point under discussion. The chapter end notes identify each speaker. In that way the source notes don’t interrupt the smooth, fluid flow reading the words on the page.

Several times race driver Danica Patrick is referred to as likely having had similar experiences to the Hoka Hey women riders as all are performing and competing in what is commonly identified or thought of as a “man’s realm.” As a guess, I suspect Van Vlerach is unfamiliar with the late Denise McCluggage and especially her racing experiences about which she wrote so eloquently. Or those of Janet Guthrie, Lyn St. James and others who in their day were initially barred from the pits—not to mention the cockpits of Indy, Champ and other race cars—simply because of their gender.

The entire book is (no surprise) well-written and informs the reader—men and women alike—as it raises awareness too.

Posted Under: Motorcycles | Author: Helen Hutchings | No comments yet