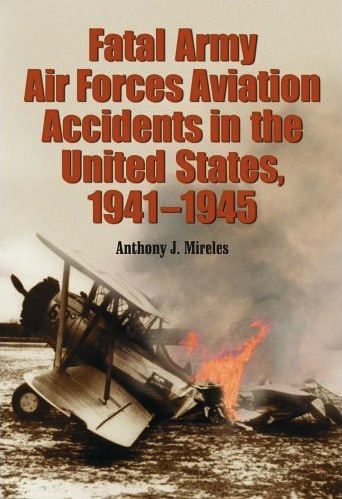 General LeMay once famously commented that more of his B-29s were lost in training accidents than in combat over Japan. He was talking of only his bombers and only about the summer of 1945. Known as much for calling a spade a spade as for looking for toes on which to step, his remarks were probably shrugged off as grandstanding. Turns out, the overall picture—all aircraft and all the war years—is much, much bleaker.

Author Mireles (b. 1963) read those words too, and as a history student researching a war-related topic, was reminded of them as he kept coming across random press clippings pertaining to military aircraft mishaps on what seemed like a daily basis. Many years later, his books seek to not only tally these incidents (incl. rotor wing) but make the stories behind them known to a wider audience. Military accident reports are of course available to the public, for a fee ($40 per microfilm reel), and if you’ve ever seen one, or any sort of military/government form, you know they’re not exactly easy to decipher and digest or even understand.

Mireles has read thousands of them—many, many more than the 6300+ he excerpts here because he had to filter out all but the fatal incidents. Imagine how big the book would be that covered even the non-fatal US aviation accidents (probably neither feasible nor, ultimately, useful) for all services (now that would be useful)!

For some people this will be the sort of book they read with a flashlight under the covers because they just can’t put it away. But, really, anyone with an imagination and any degree of aviation interest will find these reports gripping. Not least because they overwhelmingly illustrate Murphy’s Law: what can go wrong, will go wrong. (“Aircraft collided with large cactus, killing pilot.” “Pilot bailed out, pulled ripcord prematurely, parachute became fouled on airplane which dragged pilot to his death.” “Wing made contact with power line, taking 90 ft of cable with it. Cable wound itself around prop shaft; aircraft stalled, spun, and dove into ground.” Some of this stuff you couldn’t make up if you tried to!) The accidents run the gamut from mechanical issues such as fires or structural failures to mid-air collisions, bad weather, unauthorized dogfights, and all-out inexcusable idiocy such as a flight of P-47s buzzing a fishing boat on a lake and flying so low that one of the props sliced the poor fisherwoman in half!

If you are a serious aviation historian you’ll unflinchingly pony up the $195 purchase price, simply because you realize the time Mireles is saving you. Consider the enormity of the author’s effort. Tens of thousands of 16 mm microfilm records (some accident reports are hundreds of pages long!) don’t analyze themselves and he invested years of his life—and probably several eyeglass prescriptions—into creating this reference tool.

The books are offered as a set and intended to be used as such. To that end they are also paginated consecutively and each book, cleverly, contains the Tables of Content of all three. Even though you could buy individual volumes (Vol. 1 = January 1941 to June 1943, Vol. 2 = July 1943 to July 1944), you don’t want to do that because the last volume contains the key to all three. Think of it as the Master Index in addition to covering its own time period, August 1944 through December 1945. The Index contains over 32,000 entries by name, location, and airplane type and serial number—over 15,500 names, over 7100 aircraft, and over 6350 locations. Without this data, and the page references, the three books really cannot be intelligently and systematically searched. Volume 3 also includes three Appendices (losses by year, AAF bases in the US, missing aircraft), notes, and a bibliography.

Data wranglers will be, or need to be, mindful of several things.

1, finding additional data never ends. Nowadays this book would probably have been published on an electronic platform, endlessly updatable and, even more useful to the power user, searchable. In fact, the author or the publisher could easily offer such a product right now. As it is, Mireles offers on his website a few supplements containing data that just missed the publication deadline in 2006, along with a few corrections that have come to light since, but the lists haven’t been updated in years. The website is, however, about to be redesigned and updated.

2, there is no one way, and certainly no right way to organize or present data. The one thing wreck hunters—Mireles himself is one—will probably miss most of all is latitude/longitude info (which, interestingly, is not recorded on the original AAF Accident Reports). Wrecks are still being found today—just look at Appendix III! Also not provided is the current status of a crash site but this is admittedly of limited appeal and certainly not easy to find out. Of rather greater practical consequence, at least to those people who want to cross-reference Mireles’ listings with primary sources/military records, is that he doesn’t use the original accident report numbers but his own system because it is much more user-friendly for the reader as it is coded in month/day/year format plus a suffix for separate accidents on any one day (as many as six with fatalities during busy years like 1943).

Not a fault but just a fact (as is, the trilogy is 1336 pages long!) is that only the Continental US is covered, not Alaska, Hawaii, Puerto Rico, Canada, Mexico, or Latin America. Despair not: additional books covering USAAF accidents in the Pacific and China/Burma/India theaters of operation, including prewar accidents in Hawaii and the Phillipines, are about halfway done! And, the PTO/CBI summaries will add even more detail by including unit information and aircraft serial numbers.

Much like motor racing had a reputation for having the attitude that men and machinery were expendable—“the cost of doing business”—aviation, especially military aviation, went through just the same phase. Even if you did nothing else than read the Introduction in Volume 1 you’d gain an appreciation for World War II aviation issues you may have never considered before. And, lest you gripe that the data points embedded in that text would be more accessible in tabular form: they are, as Appendix I in vol. 3.

The individual reports contain of necessity quite a bit of data (date, location, aircraft, crew etc.) but the narrative contains fully fleshed out descriptive prose that is easy, engaging—and disturbing to read. There is nothing morbid about these reports; they are a testament to the toll technology and, often enough, human hubris exacts.

Once more this publisher must be applauded for putting its resources behind such a deserving but niche project. We shall count the days, and our pennies, in anticipation of the next set of books!