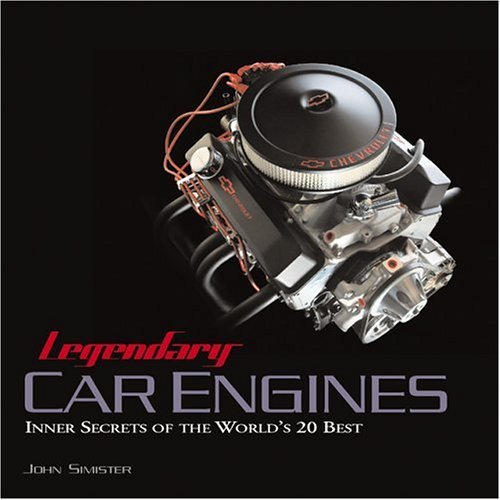 “What is it that makes a great engine? It has to be more than just the provider of a car’s motive power. It must earn its place as the car’s heart, the generator of its voice, the device that makes a car a living, breathing thing.”

The engine as object of desire—all this book is missing is centerfolds! The point of this exercise is not to offer a clinically detached appraisal of engineering doohickeys but to give visual expression to the notion of an engine being the heart or soul of a car. Just opening the book makes that point loud and clear: a close-up of a Bentley 4½L motor from Stanley Mann Racing beckons you to reach out and touch it. If you don’t find that sexy, this book is wasted on you.

Simister is a long-time automotive journalist in Europe (Motor/Autocar, Carweek, Car), specifically in the role of Technical Editor. He’s also taken engines apart, out of curiosity more than need, ever since his student days although he did actually work in proper repair shops as well.

Photographer Andrews interest in his métier also goes back to his school days when he took black & white printing classes at the tender age of 12. And he too followed these stirrings into a professional career, specializing in cars (his work appears often in magazine such as Performance Car, Autocar, Car) and various other moving objects along with portraiture, landscape, and architecture.

This book combines a series of magazine articles of the same name that first appeared in the 2002 issues of the UK magazine Classic Cars. Twenty of the “best” road car engines are examined in six-page treatments in what appears to be random order. The lively and detailed text tries to capture each engine’s unique character, and describes why it was designed just that way, by whom, and how. Operating principles and technical attributes are of course referred to but the thrust of the story is on overall engineering and design philosophy. This de-emphasis of a strictly mechanistic way of describing engines is most evident in the unusual photos by Tim Andrew, which are accompanied by several color sketches by Bob Freeman. It is them that make the book unusual and original. The photos can best be thought of as “glamour shots”—rather than anatomical case studies—to bring out a motor’s visceral, sculptural, esthetic qualities. A la fashion photography, the engines are photographed against all-black backgrounds and lit in such a way as to highlight certain features and suppress others, rather than showing every nut and bolt. So, like the text, their purpose is not a deep drill-down into first principles.

While this is a British book and eight of the 20 engines are British, motors from Italy, Germany, the US, and one from France are presented. Putting the “Chevrolet” chapter under the magnifying glass reveals both—minor—historic and technical spec-related irregularities in the descriptions of the LT1 and 5 engines. Devotees of the almighty American Ford V8 will wonder why it is not included but the small block is, and they will probably struggle with the author’s assertion that it “dominated 1960s motorsports.”

Technical specs are encapsulated in sidebars. The book design features a creative use of fonts but font conversion irregularities and typos betray a certain haste. A similar book for motorcycle enthusiasts would be The Fine Art of the Motorcycle Engine by Daniel Peirce.