The Book of Air Shows 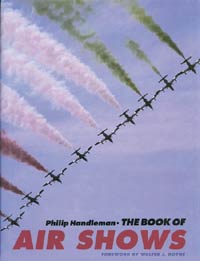 The quote below is an excerpt from the caption of the last photo in this book. And inspiring the young generation—not just in terms of technical matters but also in terms of history and the aircraft community with its camaraderie and lifestyle—is certainly a reason for Handleman to write a book like this. He is a long-time private pilot and photographer/filmmaker and both these qualities neatly come together here. You may recognize his name from the over 20 aerospace-related books he has written/edited, or from several PBS documentaries—or the 1997 US postage stamp commemorating the 50th anniversary of the US Air Force that featured his photo of a Thunderbird formation in flight (philatelists: this happens to be the first US stamp to use the Scrambled Indicia security device).

“There is no more fitting a place than an air show or fly-in for the knowledgeable technicians to pass on a taste of their trade to young, impressionable visitors.”

While the first North American air shows date to about 1910, this book covers events more or less contemporary with the date of its first publication in 1993 (reprinted 2004). The point of the book is not tell the story of air shows but to depict what happens on the air and in the ground nowadays at all the big-name events. Be it Oshkosh or Reno—or your local rural airport—there’s excitement in the air, and this book means to capture it. Handleman makes the interesting point that, for the photographer, “genuine air show photography, in its truest form, is significantly different” from air-to-air photography done from a camera ship in a pre-arranged, choreographed manner because only by shooting from the audience’s perspective, sitting where they sit and seeing what they see, can the show’s true drama and impact be captured. All of the photos in this book, he says, are of the former kind—looking at some of the flying acts it is remarkable that he was able to get those shots from the ground (pre-digital, too).In his Foreword, Walter Boyne, a former Director of the National Air and Space Museum, speaks to the earthbound dimension of aviation: “the egalitarian nature of the modern air show scene” in which the spirit of sportsmanship and the skills matter more than what you fly and what it cost. A very nice Introduction relates the author’s love affair with aviation to his mother’s own interest back in the 1930s—and her crush on Roscoe Turner (1895–1970), the dapper barnstormer and airspeed record holder (also, and surely unrelated to his grip on mom’s imagination, the proprietor of Nevada Airlines which flew wealthy women to Reno to obtain their divorces).

In seven chapters with alliterative titles (c.f., Warbird Wonders, Flamboyant Formations), all sorts of planes are shown on the ground and in the air. All the photos are in color and sharp, and most are large. A very few are so dark that details are barely discernible and since their captions say nothing about them being “mood shots” one is left to wonder if the photographer intended it this way or if the reproduction is off. One wonders the same about those that are framed in such a way as to truncate propeller tips or wings even where perspective or physical proximity to the object don’t seem to make such a composition inevitable. Several photos show close-ups of cockpits, trim, or signage. From replicas of Lindbergh’s Spirit of St. Louis to modern-day F-117 Stealth fighters, the entire catalog of fixed-wing machinery makes an appearance. A few of the aircraft are of foreign make, there are some ultralights and oddities such as the Inflatabird (just what the name suggests!); there are no gliders, helicopters, or seaplanes.

And speaking of large photos, Schiffer is one of the few publishers whose bookbindings have properly rounded spines which means that a book can open fully flat and a photo that goes across a spread loses no image detail in the gutter.

Being an aviation historian, Handleman provides extraordinarily detailed photo captions. Descriptions of flying acts and aerial maneuvers in particular benefit from the author’s first-hand piloting background. A closing chapter portrays air show personalities and participants, from professional aircrews to tailgate barbequers. There is no Index—truly a loss—but there are the nicely marbled endpapers we find in so many Schiffer books. (Websites come and go but at the time of this writing, two indices of people and aircraft can be found in the Women in Aviation webzine Winged Victory.)

Joint Strike Fighter: Design and Development of the International Aircraft »
« André Lefebvre and the Cars He Created for Voisin and Citroën