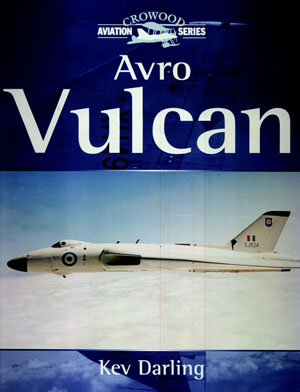 Among the several aviation books Kev Darling has done, this one is probably the topic for which he has the greatest affinity: he spent almost half his 20-year life as an RAF engineer on the Vulcan. And he says he had wanted to write this book for 20 years. Several people from his service days provided material for the book and provided input—always a good sign if the very community one would consider experts embraces a project.

The Vulcan was the world’s first delta-winged bomber to reach operational service, in 1956, and remained on active duty in various roles with the RAF into the 1980s. Even in retirement it retains a certain mystique and one copy (XH558) is being kept flying at great cost even today by the British “Vulcan to the Sky Trust.”

Following a page of abbreviations, the book lays the groundwork by explaining the tactical considerations in response to the global changes after the end of World War Two, the inadequacy of existing equipment to fulfill the new mission, and explains the required performance parameters for a new plane. The then untried swept-back wing is a key aspect of this discussion and Darling describes and shows various intermediate steps on the way to what would become the V Bomber force—Valiant, Vulcan, and Victor. (The other two planes are mentioned only in passing.) No two readers will probably ever agree as to what should be in a book but there is no fundamental fault to find in Darling’s choices for what to omit and what to include based on the premise that, for lack of a better way of saying it, this is a general-interest type of book. The reader new to the subject or with only a passing acquaintance of it will find here enough context and sufficient detail to gain a solid picture of this specific aircraft and its specific role. Also, and inevitably in a book about an aircraft, there is quite a bit of [a] jargon and [b] data to work into the text but most of the many numbers on which the casual reader’s eye might fall are weights, speeds, altitudes etc.

The focus of this book is on what makes the aircraft work and what its various components do. There are therefore many technical drawings and exploded or cutaway views to amplify the text. What is often missing from this sort of book, and it is missing here too, is an annotated diagram of the cockpit instruments. There is an illustration of the bombardier’s panel; it shows 68 numbered gauges but then doesn’t provide a legend as to what’s what. (So what’s the point?) Sidebars dispense peripheral information. The photos and illustrations on any one page are pertinent to the text—which sounds obvious but can never be taken for granted! There are lots of photos of every possible flight attitude and many detail shots of various assemblies. The type’s one and only combat assignment, the Falklands conflict, is described but sparsely illustrated and even at that only ground operations are shown. There is also only one single photo of the air tanker variant, trailing its refueling hose. As in other Crowood books, the color photos are bundled on four pages in the center.