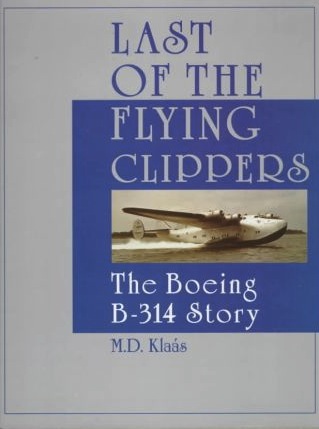 In terms of aerodynamics, a flying boat is as much of an enigma as a helicopter. It shouldn’t work . . .

Of the three “main” flying boats of their era—Sikorsky S-42, Martin M-130, Boeing 314—the B-314 was the largest, fastest and, arguably, sleekest-looking. It was also the last. The aviation historian who looks backward in time will see in its lines the earlier experimental Boeing XB-15 (and the contemporary B-17 Flying Fortress bomber) and the one who looks forward the Boeing 747 Jumbo Jet (in whose design 30-year-old B-314 wind tunnel data was referenced).

Author Klaäs was too young to concern himself with either when he first came across the B-314 in the early 1950s. Did you ever have a high school writing assignment that changed your life? Well, maybe not changed but it certainly was a pivotal experience for Master Klaäs and sparked a lifelong interest in collecting every morsel under the sun about this “flying hotel,” resulting at long last in this book.

When Klaäs contacted the Boeing company in the late 1960s to trace the history of the five of the original twelve 314 Pan Am flying boats he had not already researched, the company placed a notice in its in-house magazine and a number of its staff and readers, both civil and military, responded. While this exercise did not materially advance the research it is, in fact, the author’s full reconstruction of the fleet history that is one of this book’s singular distinctions, another being the abundance of illustrations.

Perusing the exhaustively long list of names in the Acknowledgments reveals scores of aviation historians, company PR and engineering people, and flight crews. It is not clear if these folks offered material or reviewed the manuscript but it is clear that no one in the aviation community has given this book in the many years since its publication the sort of scathing dismissal a bunch of random non-professional commentators felt compelled to inflict. What can be said objectively is that, stylistically, the writing is flawed, so much so that this otherwise good book has suffered. The publisher, as a matter of course, does not engage an editor, and they are hardly alone in this. The person who draws our ire is the one singled out in the Acknowledgments as a “life-long friend” who served as the “witty and delightful editor.” While these are eminently desirable attributes for anyone, an editor first and foremost must possess command of language and the ability to rein in an author, friend or not. “General learnedness,” if not outright specialized knowledge of the subject also come in handy. It truly pains to say it, this book being the labor of love it so obviously is, but something went awry . . . tortured prose abounds and there are glitches in even the non-technical material that anyone with an attention span should have caught. Just one example, right from the first page: the (unnamed) US First Lady who christened the first Clipper is called “Mrs. J. Edgar Hoover” and a few sentences later “President Herbert C. Hoover’s wife.” (The former is not only wrong—he ran the Bureau of Investigation, the forerunner of the FBI—but Lou Henry Hoover the devout Quaker would have been mortified to be associated with J. Edgar! While contemporaries, the two men are not related to each other or the Hoover vacuum company.) Note to eagle-eyed readers: our spelling of the author’s name is the one he himself uses: Klaäs, but it’s Klaás on the cover.

With the above caveat in mind, let’s see what this book does do well: it casts a very wide net. From red tape surrounding landing rights to the design of water rudders to the criteria for cabin colors, every aspect of design and flight operations is considered. Extended water crossings entail a whole host of specific technical and logistical problems, be they safety- or endurance-related or even in terms of navigation and other such aspects of general airmanship. All this is touched upon, albeit to varying and sometimes puzzling degrees of magnification. Much attention is given to flight operations, both from the point of view of the crew and the passengers.

How to divide a book into chapters is not an exact science and all one can say is that the chapters skip around quite a bit (i.e. something introduced in one chapter may be revisited later; this even applies to photos of the same flight or incident. Not having an Index complicates matters further.). Also covered are US military service of the B-314s and the activities of the three Pan Am aircraft seconded to BOAC who had had to relinquish its Short S.26 transoceanic flying boats to the RAF.

Fun fact: none other than Atlantic-crosser Charles Lindbergh piloted the first Pan Am Clipper, a Sikorsky, on its inaugural passenger flight (Miami to Panama).