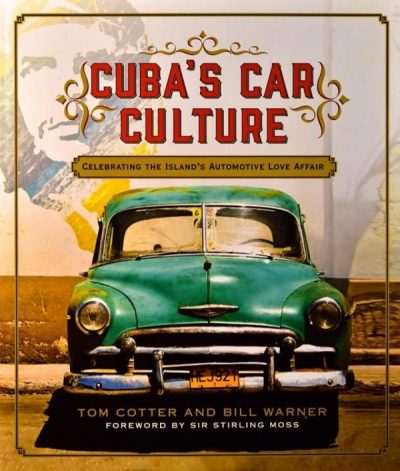 With 20-20 hindsight, the release of this book couldn’t have been better timed. Cuba is opening up to travel by US citizens and long-time dictator Fidel Castro died only recently.

Since the 1959 Castro-led revolution no American autos have been imported into Cuba and so the island is a time warp of automobiles from before that time. Certainly, these are not true Classic 1 cars (as defined by the Classic Car Club of America), but their story is a special one and it’s well told by Cotter and Warner. The twosome visited the island to do their research first-hand. They saw the cars and visited with the individuals who’ve cared for these now a half-century-old relics, many of which still see daily use.

Both authors should be familiar names on the classic car scene, Cotter as the author of the “barn-find” series of books, and Warner as founder and president of the Amelia Island Concours d’Elégance.

The ingenuity of the Cuban mechanics is on display throughout the book. Despite an embargo that also forbade the importing of parts, their ingenuity and resourcefulness have kept these cars on the road far longer than anyone might have imagined.

The book also touches on Cuba’s racing heritage, which began in 1903 and reached its zenith in the 1950s with the Cuban Grand Prix that attracted the top interational drivers, including Juan Fangio, Phil Hill, Stirling Moss (who wrote the Foreword), Alfonso de Portago, and Carroll Shelby.

The stories are well told and the photography is excellent—a combination of vintage photos from Bill Warner’s collection and photos taken during the visits to the island. Word has it that the book is already in its second printing, so scoop up your copy today.

The reviewer served as president of the above-mentioned Classic Car Club of America and currently is chief judge at the Amelia Island Concours d’Elégance.