Art Deco and British Car Design: The Airline Cars of the 1930s 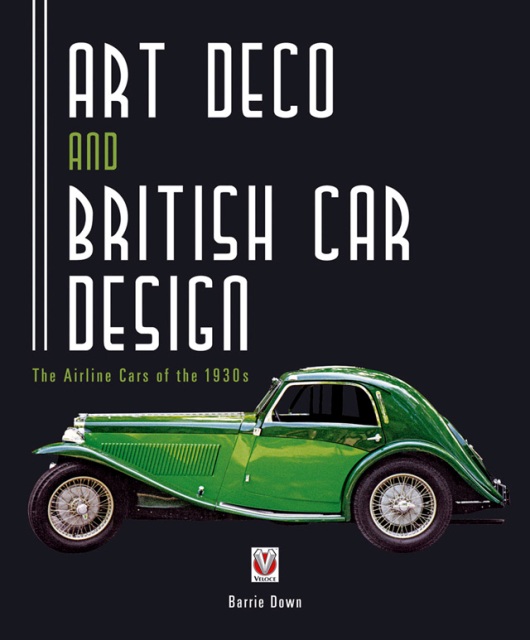 Some of the most beautiful cars ever built were made during the 1930s, in Europe and America, and Barrie Down’s book was eagerly awaited as it showcases the cars made in Britain that reflected the Art Deco school of design. Did you know that representatives of the French coachbuilders went so far as to attempt to stop the sketching activities of British observers at the Paris Motor Show? But, with or without the benefit of seeing what their Continental colleagues did, the British developed a succesful application of the idiom and the methods.

Just how to define a car as “Art Deco” is a difficult task but Down makes a valiant attempt to apply it to British car design. That design concept permeated most aspects of the decorative and applied arts and crafts by the 1930s, from buildings to typography and fashion to cars. To quote from the book’s Foreword, “Art Deco was not a stand-alone Art movement, but it was a social revolution that affected most people and products to a significant degree during the 1920s and 30s. In the motoring press at the time this style was known as ‘Streamlining’ and many of the models were actually named ‘Airline’ or given names in similar vogue, each relating to the Aircraft industry.”

Now living in Canada, Down, an industrial designer by trade, grew up in the austere years of postwar Britain but was able to “escape” through his interest in the often arcane cars which survived in those pre-MOT Test days. He owned one of the 22 or so Triumph “Flow Free” cars built for the 1935 trading year, although, if he took any photographs of it, they are not included in the book. Instead, an unused body which had gone onto a 4½L Bentley chassis being “modernized” during the 1930s has been wed to a 1938 Triumph chassis to recreate probably the only surviving Triumph “Flow Free.” The illustrations of this car are excellent, and with a cover illustration of the MG Airline Coupé, the book is certainly very handsome. However, the contemporary photographs and illustrations vary wildly in quality, from very muddy scans of surviving documents to some which seem good enough to have been reproduced from glass negatives. Similarly, although the modern images often seem to have been gleaned from visits with a Box Brownie to club events, industrial sites, or blokes’ sheds, there are some very sharp images to show us that, with a little more care, this could have been a very good book.

The book’s strengths are its analysis of production figures (often laughably small for cars with such a strong reputation) and its identification of the designers and coachbuilders who produced these designs, often as batches, for the various marques. These include AC, British Salmson, Hillman, Jowett, Lagonda, Riley, Rover, SS Jaguar, Standard, Talbot, and Triumph.

There is virtually no technical information on the cars included, and the individual marque histories could have come from Wikipedia. The book has been well received by enthusiasts of the various marques listed above, and it would be easy to assume that, if the information it presents satisfied each marque’s proponent, it received a reviewer’s “tick” in the hope of renewing interest in this fascinating topic.

This reviewer has a strong affinity with Rileys, and the review copy sort of fell open at the Riley chapter—whose head, annoyingly, contains in big fat letters a typo: “Kestral” instead of “Kestrel.” And while the subsequent text does spell the name of this classic shape, first displayed at the 1932 Olympia Show, correctly it gets something else wrong when it identifies a 1936 Kestrel 9 in the “66K” chassis sequence as a Merlin. Rileys are given scant acknowledgment in the development of the Art Deco design, the author not crediting the Kestrel as being of a true “airline” shape, despite Rileys themselves in 1934 advertisements claiming that they initiated that very shape and word. Rileys were surely helped by their “in house” coachbuilding concern, Midland Motor Bodies, which was run by Allan Riley, one of the five brothers of this private company. Certainly no other manufacturer approached the quantity, literally thousands, as the Kestrel shape was developed and refined from the 1932 two-door prototype on the 12/6 chassis, its introduction for the 1933 trading season as a rakish four-door saloon, right up to the deliveries of the last 2½L cars in 1940.

The book is divided into two parts, the first one exploring the genesis of Art Deco (rather too cursory) and the logic, such as it is, behind streamlining and the second part presenting 10 specific cars/marques. It is not explained how or why these specicfic examples were chosen and thus the reviewer can only point out that they represent neither the most sophisitcated of British work nor the higher-tier marques on which such work would likely be found. Still, the book usefully fills a gap in our knowledge.

It is worth noting that the book design itself employs Art Deco-inspired fonts and graphic devices. (Bibiography, Index.)

Posted Under: Art, Artists and Design, Automobiles | Author: Tom King | No comments yet