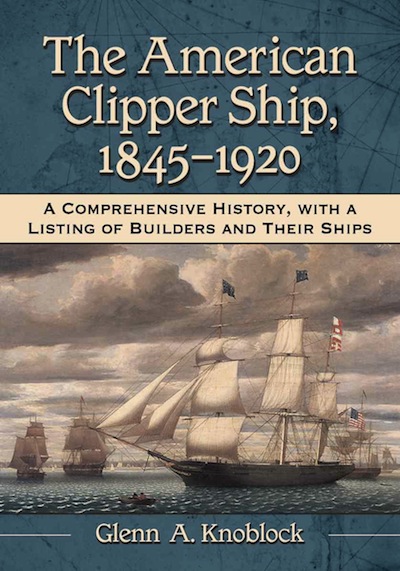 I enjoy reading a good book for an hour or two every morning, particularly one that I can happily become absorbed in over a period of a couple of weeks. At an estimated 260,000 words, this book provided me with just such an experience, and I was sorry when it ended.

Even though this is primarily a history book about a short-lived 1850s commercial period dominated by high-speed clipper ships, it’s an unusually good one that makes the data and information come alive in an unexaggerated, truthful, and realistic way. The author writes as if he were speaking to an intelligent listener, describing in unhurried detail an enjoyable topic he knows a great deal about. This measured enthusiasm for the topic comes through in his writing. With paragraphs as long as some of the sea voyages he describes, I got used to trusting that it would all end well, and it always did. Names and dates and personalities all flowed together to make for an enlightened trip into the reckless extremes of fast freight à la 1850, when the California gold fields were booming and distant trade with Asia generated huge profits, huge losses, and great loss of life for everyone involved, particularly the crews. Many a man was washed overboard and left behind to drown in heavy seas.

So get on your best rain suit and prepare your hands for hanging on to tar-impregnated ropes in sub-zero weather, while howling wind and sleet do their best to make you lose your grip, or your footing, 100 feet above the storm-tossed ocean.

The book opens with a short dedication to the author’s two sisters, followed by the Table of Contents, Acknowledgments, and an interesting Introduction where the strong and weak points of previous clipper ship books of note are discussed. After that, the book dives directly into “Part One: The History of the Clipper.” This section contains ten data-filled chapters covering topics that gradually take the reader through all aspects of the history of the clipper ship era.

The first chapter is entitled “Westward Ho: The Coming of the Clipper” which tells how the 1820s development of trans-Atlantic packet lines and the quest for speed created the need for a fast commercial sailing ship. The next chapter, “Challenge: The Design of the Clipper Ship” tells us how the ships were shaped and why, including how the sails were arranged. The third chapter, “Young Mechanic: The Building of a Clipper Ship,” takes us through the building process, and then “Architect: The Clipper Ship Builders,” tells us who built what, and why certain ships, like the Flying Cloud, and certain designers, like Donald McKay, are famous today. “Intrepid: Clipper Ship Commanders, Crew and Passengers” is full of interesting stories, both horrifying and uplifting, that defy imagination. When the law of the sea overrides the law of the land, morality gets distorted. Life and death struggles ensue between captain and crew over the value of a sailor’s life versus the profits to be made by forcing a risky fast passage across a storm-tossed ocean. A lost man here, a lost man there, who cares? Some courts did, most didn’t. Successful mutinies did occur. More than once a woman stepped to the helm and acted as captain to rescue a failing voyage.

The next chapter, “Wild Rover: Clipper Ship Voyages and Trade,” gets into the sometimes extremely profitable financial end of the clipper ship business, where the entire cost of the construction of the ship could be paid for in a single lucky voyage. “Titan: Clipper Ship Owners and Agents” tells us what that end of the business was like, how cargo was accumulated and insured, and who the established companies were and where they had their offices. “Sweepstakes: Fast Passages and Record Setting Voyages” grabbed my attention and brought home how impressive these sailing ships must have been. No clippers exist today, so we can only imagine what it must have been like to see them in person, with three twelve-story-tall sail sets spread up and out in an incredible display of human engineering. One 1853 long-distance record port-to-port time from San Francisco to Boston remained unbroken for 140 years, until 1993, when a specialized high-tech catamaran finally went faster, only without the handicap of carrying tons of commercial freight on board.

The ninth chapter, “Hurricane: Shipwrecks and Other Noteworthy Clipper Events,” fills us in on all of that action. It would seem that every clipper ship that was launched sank in the end. Not strictly true, of course, but the percentages were stacked against lasting beyond a few years of profits before some “act of God” cut short the ship’s operational life. Lightning strikes and subsequent all-consuming fires, submerged uncharted reefs that could quickly rip out the bottom of a wooden ship, and storms of all sorts were a constant threat to the clipper ship’s survival. Rio de Janeiro, Brazil and Valparaiso, Chile are mentioned over and over again in the text as unscheduled ports-of-call for repairing clippers damaged by foul weather as they tried to round the Horn or force their way through ocean storms and hurricanes.

“Twilight: The End of the American Clipper Ship Era” pulls down the curtain on an industry and ship design that peaked in 1853 and declined after that until the last clipper still afloat was decommissioned in Buenos Aires at almost 70 years of age, in 1920.

“Part Two: Clipper Builders and Their Ships by State,” takes the reader through the final 100 pages of the book. In this section every ship built is described by tonnage, when and where it was built, and who designed it. A total of 422 ships are documented, including their eventual demise and any other pertinent data that can be quickly included in a short paragraph or two.

A very good Bibliography and a narrowly focused Index end the book.

If you are interested in clipper ships, or a view into the culture of that hell-bent-for-profit era, then this book is definitely worth the $55 purchase price. Knoblock has written four other books that the same publisher has released since 2003. If his previous books are written half as well as this one, they’ll definitely be worth reading!