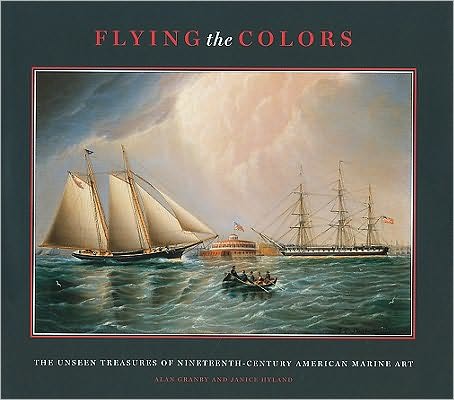 “Studying works that were painted between the years 1600 and 2000, we found ourselves drawn to paintings on the nineteenth century. We became enthralled with the evolving designs and beauty of ships of the period, their grandeur reaching its pinnacle with the clipper ships and yachts of the 1850s.”

Published by a house whose motto is “Publishing Fine Art Books of Exceptional Quality” this beautifully designed and presented book does indeed deserve your undivided attention, most especially if you are a bibliophile and open it for the first time: its 260 color plates are printed on high-gloss coated paper that makes that distinctive “ripping” sound when two such pages that touch each other surface to surface are separated. Ah, shiver. Even if high-end books are your daily bread, this one will impress.

No interest in maritime matters? That’s probably only because no one has yet grabbed your attention by laying out how ships/boats rank right up there with the invention of the wheel in singularly advancing the fate of man. A small, rickety wheeled cart pulled by a bored beast of burden is fine and dandy but pales in terms of engineering challenge to the interdisciplinary tour de force that is a waterborne craft able to stay afloat, adapt itself to the elements, maneuver, and be self-sustaining for long stretches of time. Add to that the sociological, economic, and political complexities of being able to boldly go where none have gone before and you’re looking at something of the cultural import of today’s spacecraft! So there.

This book gathers material you could not possibly hope to see yourself in person and may not even know exists. Even though several of the 55 artists included here are recognized and well-known masters in their field, it was a specific aim of this book to showcase material not previously published (hence the subtitle). Only few exceptions to this rule are made, in the cases of artworks that are of such significance that their omission here would weaken the story. Moreover, the vast majority of the pieces are held privately with only 11 paintings coming from museums, historical societies, or private clubs. To gain access to these paintings, one would have to be exceedingly well connected and expend a great deal of resources. Lucky for us, the authors are and did.

Together (and married) they run Hyland Granby Antiques, founded in 1976 and specializing in museum-quality 18th and 19th century marine antiques including paintings. Many of the most significant pieces to have come to market in the last 30 years are said to have passed through their hands and they are consultants to private and institutional collectors. Granby previously produced the books A Yachtman’s Eye: The Glen S. Foster Collection of Maritime Paintings (2004) and Maritime Maverick: The Collection of William I. Koch (2006). 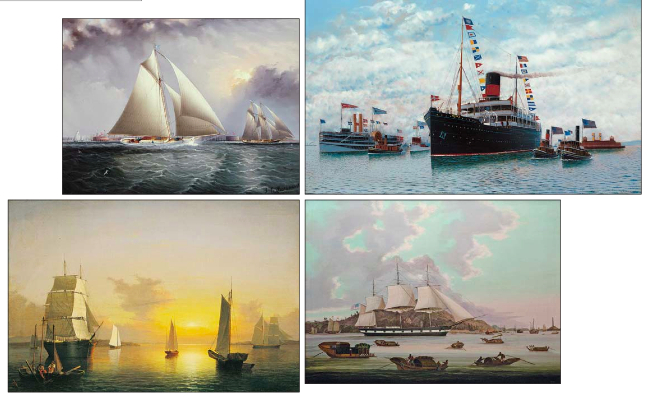 John Wilmerding, who was a professor of American Art and is himself the author of an important book in this field (American Marine Painting, 1987), refers in his remarks—here unceremoniously relegated to the dust jacket flap—to Flying the Colors as “a magisterial visual survey” not seen since the 1970s. This is, thematically, a vast topic and has a vast pictorial record. In order to distill from it only the very best and most representative examples, Granby and Hyland considered thousands of paintings and made their choices based on “pictorial quality and historic interest.” That they looked wide and far is evident in the fact that the final chapter is devoted to the work of international artists who happened to have an interest in American vessels. There are many deserving works they would have liked to include here—but the book had to end somewhere. A second volume may be in order.

This landscape-format book (16.6 x 12.2″) is far more than a parade of pretty pictures. Note must be made of the splendid 10-page introductory essay by Stuart M. Frank, a noted expert with a long list of academic and professional distinctions, that creates context in which to see the “American factor” in the paintings. He draws attention to a period marked by decisive changes in the form of the American revolutionaries breaking with Great Britain, the “single greatest force on the High Seas,” and the effects of America loosing what we today call Most Favored Nation status. It’s obvious only once someone points it out: American ships no longer had British protection and lost direct access to ports in Britain’s colonies, etc. The modalities of maritime commerce changed drastically and with it certain physical aspects of designing suitable ships. In fact, in short order American frigates dealt the once indomitable Royal Navy so many humiliating blows that it abandoned improving its own boats in favor of adopting Yankee models!

Each of the five chapters is introduced with several pages of fairly detailed historic and biographical information, heavily footnoted (notes are at the back of each chapter. The Index, too, is most thorough.). The few paintings in these sections are reproduced small but elsewhere are one to a page; a few pieces of carved (mastheads, prow decorations) are also shown. All list artist, title, medium, size, and ownership (without specifics, to guard the owners’ privacy). Neither here nor in the Plate List at the back of the book is the year stated. Purists may well grumble at the glossy reproduction of the paintings but the gloss really does make fine detail visible. Not all of the “minor” painters are illustrated.

The prose throughout is a joy to read, and insightful and engaging—which opens a particular can of worms: a person other than the authors of record claims “I wrote [this book] in 2007–08 (and which is co-authored by Alan Granby and Janice Hyland).” That is Lauren Pheeney Della Monica who runs her own fine arts consultancy and has, indeed, co-published articles with Granby before (as well as on her own) but here her name is nowhere to be found, not even in passing in the Acknowledgements that go so far as to give a shout-out to the authors’ dogs! There are at least two reasons her claim seems plausible: as a lawyer specializing in commercial litigation and art law she’d be the first to know the danger of fraudulently claiming authorship, and no one has stopped her from posting the entire book and some of the illustrations on her website for several years now!

Get this book while you can! Not even South Korea, where this book was produced, can afford to make this much book for this little money anymore. Hard to believe that the Mystic Seaport Museum, under whose auspices it was produced, once offered it for a mere $75. A leather-bound, limited numbered edition is available through Hyland Granby Antiques.