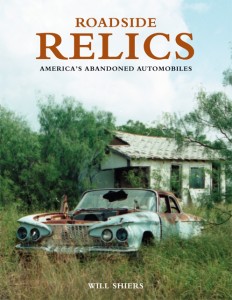 This look at scrapped American cars lain to rest in field and stream (yes, literally) not only documents relics of yesteryear but also a phenomenon that won’t exist much longer. Except for their steel parts, cars of the past have not been biodegradable so much as they have been recyclable. This will change as automakers are developing compostable materials such as soy, grass, corn, hemp, or Indian grass to replace plastics and fiberglass in cars. (Anyone have a 2008 Mustang? That’s the first year in which seat foam had 40% soy content.)

From official junkyards to rogue scrapyards to the randomly “forgotten” single car in the middle of The Great American Nowhere, photojournalist Shiers has been tracking rust and rot for over a decade.

“Every vehicle in this book used to be an important part of someone’s life—something that was lovingly washed and waxed every Sunday morning. Back then, even the most minor scratch could cause month-long depression. Yet today, nobody cares.”

What makes this all the more remarkable is that he is from the UK. In other words, he doesn’t just wake up one day and say to himself “Looks like a slow day. Let’s go spelunking!” He has to get on a plane first and travel 5000 miles. And he dragged his dad along! Talk about commitment . . . Well, it was “for work”—for years Shiers has submitted his photos to Classic American, the UK’s monthly magazine about American cars.

Was there a convention a couple of years ago where book authors dared each other to bring out books like this? Tom Cotter started his In the Barn series in 2005, Malcolm Tucker wrote Rust in Peace in 2007, and in between these two, Will Shiers published the 1st edition of this book. Then there were Lost and Found and It’s Original Only Once in 2008. Several others are in the works even now! All of these circle the wagons in a distinctly different way and their only common denominator is that they talk about cars that have seen better days.

The 2010 edition reviewed here is the softcover reprint of Shier’s original hardcover version. Already then Shiers made the point that the escalation in steel prices ($95/ton in 2006 vs. $7.50 in 1996) was going to vastly accelerate the crushing and recycling of old cars. While the steel price has fluctuated in the meanwhile, its trend is incontrovertibly upwards. Add to that environmental regulations that leave junkyard operators little incentive to stay in business and you appreciate why Shiers has a sense of nostalgia.

He takes a fond—and very well informed look—at American cars from 1910 to 1970, one to a page, and divided by marque (Ford, Chrysler, GM, Independents) and a separate chapter on utility (trucks, buses etc.) and service vehicles (cabs, limos, ambulances etc.). Play a game with yourself and try to identify the cars from the photos before you read the caption! You’ll probably draw a lot of blanks, which will only make you appreciate all the more the considerable depth of knowledge that is apparent in such seemingly self-evident comments as, “The unique forward-sloping roof instantly identifies this 1966 Pontiac Bonneville as a Superior-built military-spec ambulance.” Why of course! What else?!

The photos are of course Shier’s. Most of them are taken in the American West since its climate is conducive to undisturbed, slow-motion decay. Foreign readers will appreciate the vast landscapes and open spaces. The captions say a bit about the backstory, location, model, condition, and even collectibility. The latter is of rather academic value because most cars here are mere skeletons, with trees growing through their engine compartments and slowly melting into the ground from whence they sprang.

Even junkyard dogs (and sheep and geese and goats) get their due. All around this is an entertaining, poignant, clever book. Shier has an eye for the odd: one car, a 1950s Ford station wagon, is stuffed to the gills with bones. Whose is anyone’s guess.

No wonder the aforementioned Tom Cotter is quoted on the back cover as saying: “I’m jealous!”

The Rooster Bar »
« GM’s Motorama: The Glamorous Show Cars of a Cultural Phenomenon