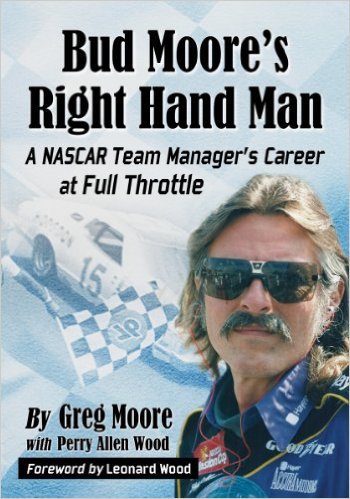 The authors have combined efforts to create an account of an important part of NASCAR history through their experience as activists in the sport. Wood, who managed a major NASCAR team of the last quarter of the 20th century, argues in his introduction that from the beginning of NASCAR through the 20th century, Spartanburg, South Carolina was a major hub of NASCAR and a big part of this hub was the NASCAR team of Bud Moore Engineering. Enter Greg Moore. He worked with his father in Bud Moore Engineering from 1975 to the sale of the team in 2000. Most of the book is written by Greg Moore with comments and clarifications by Perry Wood, which are in italics.

Greg’s style is rather informal. The book has a feel of an oral history. He can get technical about the modifications to car engines but it does not detract from the interest of the story to a nontechnical reader. The story starts with Greg’s early memories of trips to various venues for NASCAR races. It is much about the characters that he meets; races, crew members, family members, and girlfriends. When older, Greg begins helping out at Bud Moore Engineering but the story really picks up as Greg becomes an active member of Bud Moore Engineering after he graduated from high school in 1975. He works his way up to team manager during an important part of NASCAR history.

From the remembrances of Moore we get the inside story of the trials and triumphs of an important NASCAR team of the 20th century. We get a feel for the challenges that team owners face: dealing with drivers, sponsors, and NASCAR rules. Drivers’ egos need massaging and their driving styles need to match the team’s approach to racing, sponsors can be fickle, and NASCAR rules change from year to year. Teams needed to adjust to the changes while keeping everyone happy, and maintaining a competitive race car and profitability. This is a difficult task at best.

This review appears courtesy of the SAH in whose Journal 268 it was first printed.

Posted Under: Racing, Rally | Author: Other | No comments yet

Hurst Equipped: More Than 50 Years of High Performance »
« I Kept No Diary