On a Global Mission, The Automobiles of General Motors International, Vol. 2

Holden, Daewoo and Unique Variations of Chevrolet, Buick and Opel 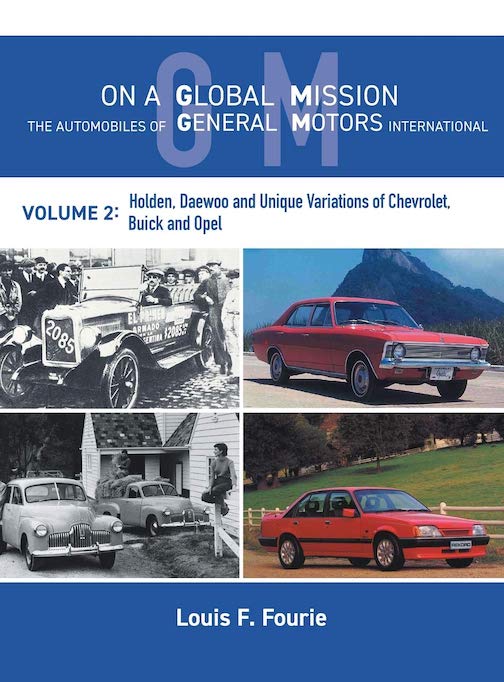 As the subtitle indicates, this second volume of On a Global Mission, The Automobiles of General Motors International is going to take its readers to still other locations around the globe including Australia, South America, South Africa, South Korea, and China.

First stop, South America. By the last decade of the century, one South American country—Brazil—“emerged as the third largest manufacturing base for GM after North America and Europe.” Then it’s on to survey the people important to GM’s presence in South Africa along with, of course, the vehicles offered there. The foregoing people and vehicles comment is important because author Louis Fourie understands all too well that vehicles do not create themselves in a vacuum and many of those people are personalities with stories worthy of sharing on his book’s pages. 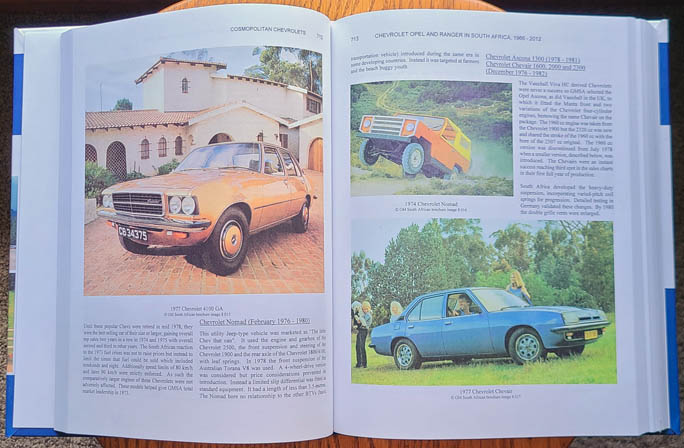 The Chev 4100’s low waistline and clean appearance, on left, are courtesy designer Charles M. Jordan. Yes, that Chuck Jordan. Top right, the Chevy Nomad was marketed as “The Little Chev that can.” The car bottom right was named Chevair marrying an Opel Manta front onto an Opel Ascona. It met with instant sales success in South Africa. 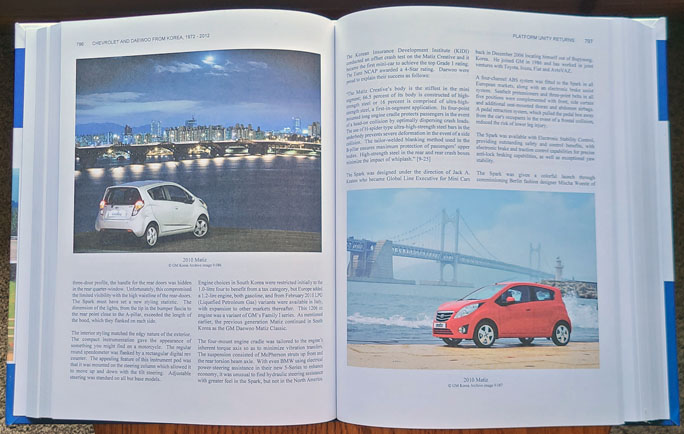 GM Daewoo/Korea has played its role along with GM China securing GM a real presence in Asia. While the Chevrolet bowtie predominated in Korea, it is Buick’s tri-shield along with a few bowties, some Wulings (a Chinese company and brand established in 1958 in the province of Guangxi, eventually becoming part of SAIC-GM-Wuling) and Baojuns (a Chinese domestic brand meaning Treasure Horse to which GM acquired access as part of SAIC, see next paragraph), and a couple of Cadillacs that define GM’s China presence. The Buick aspect of it is particularly steeped in history and the Chinese culture.

The chapter titled “Why Buick?” answers that question and describes Buick’s growth in China since its first entry with the 1997 Century. Its partner, Shanghai Automotive Industry Corp. (SAIC) began constructing Buicks in 1998, reaching full production volume in April 1999.

A decade later, Fourie writes, “GM was in desperate shape, China was its brightest star . . . On June 22, 2009 Buick celebrated the production of its 2 millionth car in China” Back in the states “GM was negotiating its way through bankruptcy. China had already become Buick’s largest market and this success was instrumental in the Buick brand being retained while GM shed many others.” 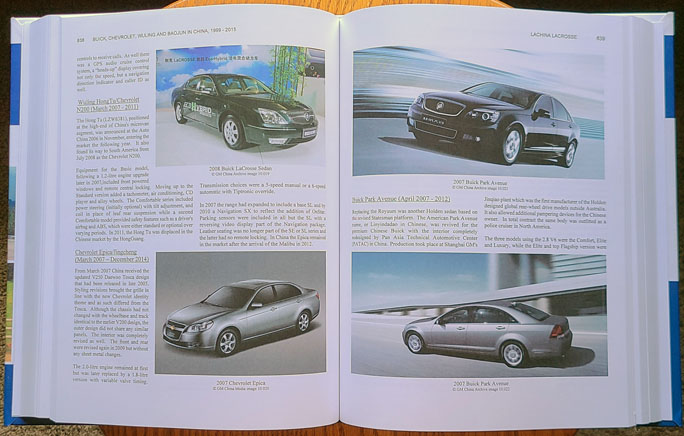 Top left is a hybrid-powered 2008 Buick LaCrosse Sedan with a 2007 Chevrolet Epica at bottom. Facing page has two views of 2007 Buick Park Avenues. Their interiors had been completely redesigned by Pan Asia Technical Automotive Center (PATAC) in China.

Fourie again explaining the importance to the post-bankruptcy reorganized GM, and especially Buick, of Chinese input; “GM China determined to give its market the best products from the GM stable . . .set an example of how to improve the Buick brand and fortunately the American consumer is getting a better Buick as a result.”

Australia and its Holden would not be so fortunate although that final sad decision didn’t occur until four years after the publication of these books, leaving Fourie the by far more enjoyable detailing of Holden and its proud heritage and accomplishments which he carries off with aplomb on fully half the total pages of this volume telling of ”Holden in Australia 1917–2014.” 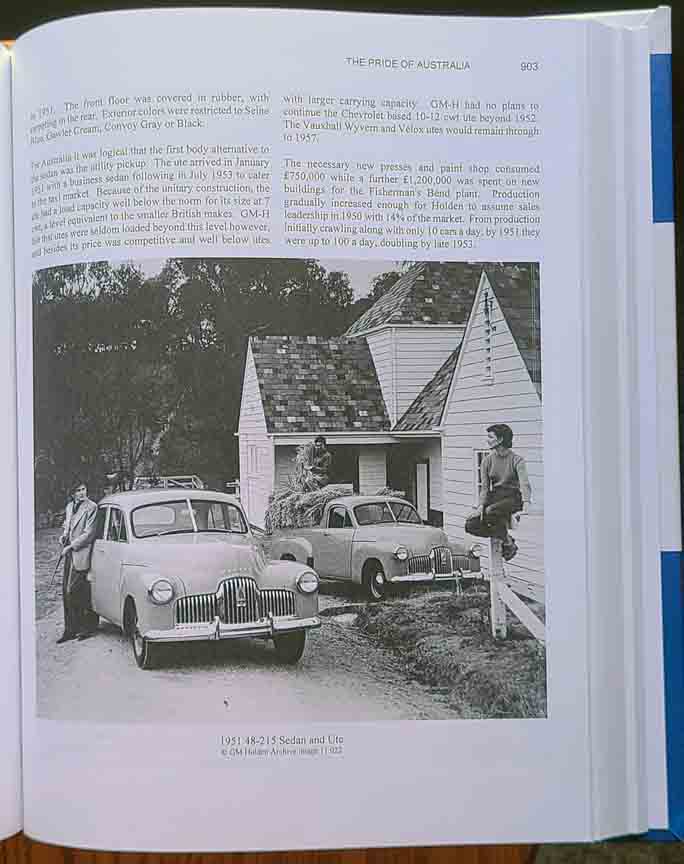 Australians felt, and still feel, an immense amount of affection toward the 48-215s produced from 1948–1953. In this image are two of its three iterations, a 6-passenger sedan and a ute. The third, not seen, was a business sedan. With its 9.5” ground clearance, forgiving gearing, and strong construction it was a go anywhere, do anything vehicle.

The chapters that follow cover the various models through the years well into the twenty-teens. For Australian buyers the top priority is reliability for as Fourie points out, “one can drive for hours in certain parts of the country and not encounter another person, let alone another vehicle.” Even as he presents the parade of cars through the years, the reader is treated to motorsports successes and snippets of Aussie’s inventiveness and humor, the latter demonstrated by the naming of some new colors: “Yellow Dolly, Tin-A-Mint and Purr-Pull.”

Holden experienced its own unwanted rude awakening when its profits plummeted, putting it on the verge of bankruptcy until parent/partner GM agreed to bail it out in 1986 by paying off its accumulated debt of A$325 million. To its credit, Holden returned to profitability but, as we know today, couldn’t survive the parent/partner’s own post-bankruptcy reorganization coupled with global changes in the automotive manufacturing realities which resulted in not just GM departing Australia in 2016 but also Ford, Toyota, and Mitsubishi. Empathetic to Australians’ point of view, Fourie writes, “What a waste of impressive talent.” 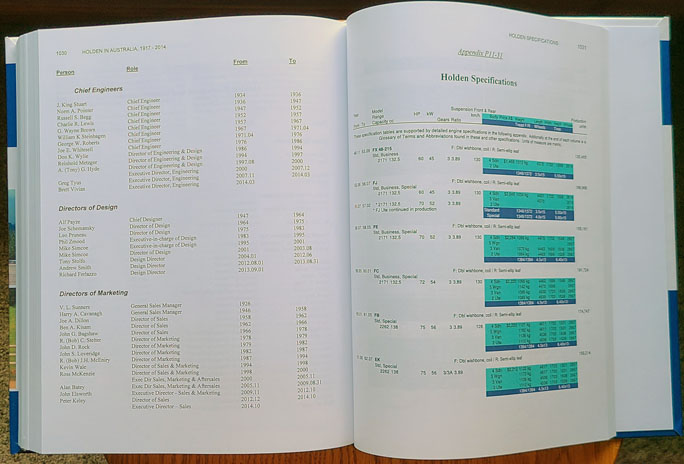 As Fourie writes it, it is a mesmerizing story bringing home just how globally convoluted and interrelated auto making and marketing has become and not just for GM but for all manufacturers. As with the prior volume, each segment also presents, in tables, charts and graphs, production figures and specifications of each GM-badged model sold in each land as shown above.

Next up, Volume 3 of this highly recommended and commended trilogy.

On a Global Mission, The Automobiles of General Motors International

This is a print on demand book and must be purchased from author/publisher via email: L4ie@telus.net or by phone 604.922.0421 (Pacific time zone)