Legendary Corvettes: ’Vettes Made Famous on Track and Screen 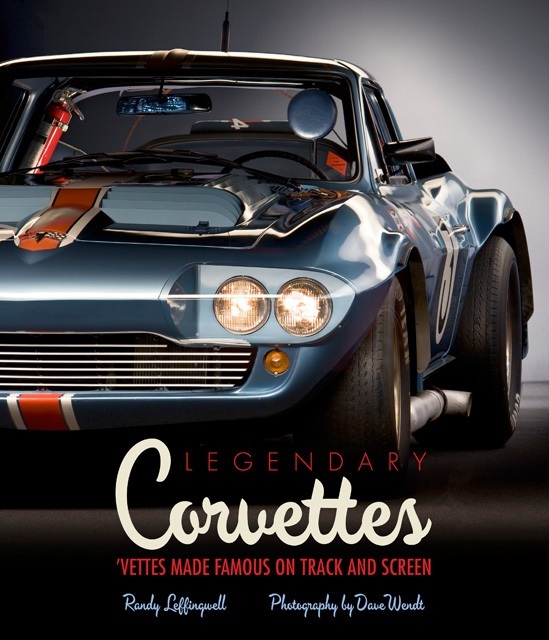 Only a handful of GM model names have lived longer—the Suburban (1935) and De Ville (1949) come to mind. And while the Corvette’s closest original competitor, the Ford Thunderbird (1955) has had a checkered and nonlinear history and even was retired several times, readers with a long memory will of course recall that if it hadn’t been for that very Thunderbird, an overnight runaway success for Ford, GM would have loved nothing better than to pull the plug on its unloved, underpowered, anemic, torpid two-speed erstwhile Motorama dream car.

Instead, fearing a loss of face, GM stirred itself into action—the Corvette crossed the million-car threshold way back in 1993 and, with few exceptions, each new iteration adds to the luster of the name. The model not only remains the iconic American sports car but continues to improve (well, the seats of even the most current Corvettes are a long way from being as good as those in other cars) and it IS one of the great cars of the world.

“Every Corvette is special. But these are legendary.”

Preceding its arrival on store shelves, the book was launched at the world’s largest Corvette extravaganza, Corvettes at Carlisle. A bold move, actually, to launch it there, the epicenter of hardcore Corvette activity/enthusiasm/mania. A bold move to even think that the world needed another Corvette book. But—this is not just another same-old same-old Corvette book. Author Leffingwell knows the state of the literature probably better than most, having contributed some two dozen to it himself as a writer and photographer. (He is, incidentally, a best-selling author for this publisher.) So, here, he profiles 18 Corvettes he considers “legendary,” “mythical” even—be it as victorious racers, the first or last of a run, movie/TV roles, or test beds. Nothing really is explained about the genesis of this thought, the methodology behind singling out these 18, what didn’t make the cut and why. Curious readers, especially the Corvette crowd, would surely have wanted to know this. 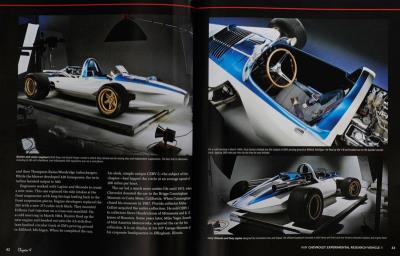 Also not much is said about photographer Dave Wendt, whose photos are the primary reason this book stands out. Supremely intelligent staging and composition are coupled with technical competence to produce truly mouthwatering photography. Their impact will make lesser, or amateur, photographers gape in wonder, especially considering the circumstances under which they are taken. With 20 years of experience shooting transportation subjects, Wendt has developed lighting and post-production techniques that allow him to achieve a “studio” look in the field, using minimal paraphernalia and crew. Wendt is fond of saying, “I’ll get in and get the job done before some other photographer has even set up all his gear.” (Some photographers will, or course, turn up their noses at “fixing it in post” which is really not what Wendt is doing anyway.) It should, however, be pointed out that many of the photos here are, intentionally, manipulated so as to look almost like airbrush artwork. You can see other consumer-market examples of his work in various auto-themed calendars he’s been doing since 1995 and also in the Ferrari magazine Cavallino.

The small book cover shot shown above is not able to give a good impression of the plasticity of Wendt’s photography. That the photos look so good, tactile, dimensional is in no small measure due to their stellar reproduction. Readers who know printing will appreciate the technical challenges; those who don’t: observe and learn. Wendt’s set-up photography is augmented by period photos and several drawings, brochures/ads, and movie stills all of which are credited. Also, the glossy dust jacket is printed on a substantial, larger sheet that is folded over and on that second side presents an 11 x ca. 19” (depending on where you cut it) photo of the 1956 Sebring roadster that is intended to be frameable as a poster, leaving the “outer” dust jacket intact. 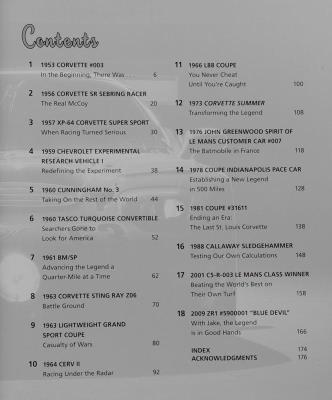 It is worth noting that the book is overall design-intensive in its—appealing—use of graphics, color, and type. (But the glossy blacks, on the 50-odd pages that use it, are unforgiving of fingerprints!) A short Index covers people, venues, and publications. One possible improvement, especially with Corvette newbies in mind, would have been to show a thumbnail of each car next to its table of contents listing, or include a separate page at the end. And photographers surely would like to be told more of Wendt’s equipment and settings but that probably falls in the “ticks of the trade/if I told you I would have to kill you” category.

Retail price is never an indicator of intrinsic quality. This book is absurdly cheap for what it offers and surely only possible by having a publisher with deep pockets.