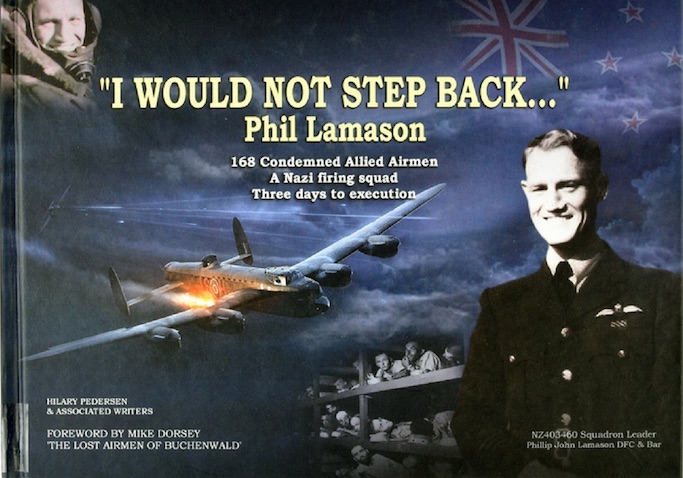 This book tells the amazing story of how one man, a 25-year-old New Zealander, led Allied airmen from the time of their 1944 capture in the aftermath of the D-Day landings and their subsequent incarceration at the Buchenwald concentration camp.

Philip Lamason was born in September 1918 into a rural community in the North Island, experienced the destruction of Napier in the 1931 earthquake and the effects of the Great Depression, but achieved a farming cadetship and a Diploma of Agriculture from Massey Agricultural College, funded by the proceeds of his clearance of 100 acres of scrub land with his slasher. With a height of over 6 feet he excelled at long distance running, rugby, cricket and tennis; leadership skills in the making.

An early interest in flying led him to join the volunteer Territorial Air Force, and the Reserve of the Royal New Zealand Air Force at the outbreak of war in September 1939. He married Joan Hopkins in 1940, but within four weeks was involved in full-time training at Lein, on the opposite side of the North Island. From there, after a voyage across the Pacific Ocean to Vancouver, train across Canada, and a troopship to England, he passed out, in July 1941, with the rank of sergeant as a bomber pilot, part of the British Air Training Scheme.

From initial service in the twin-engined Vickers Wellington, the four-engined Short Stirling followed by 1942, as did his commissioning as a Pilot Officer, and the earning of a Distinguished Flying Cross, with the addition of a bar to this decoration following after his imprisonment. During time setting up training for the notoriously tricky-to-fly Stirlings, he was promoted to Squadron Leader; he had just turned 24.

The book goes into detail about Lamason’s 1700 military flying hours and his 44 bombing missions. It has about 600 images, including documents, photographs of Lamason’s life and the idyllic landscapes of his part of New Zealand, and the remarkable art of Piotr Forkasiewicz. Taking full advantage of the landscape format, it is an invaluable record of what he and his generation were called upon to undertake.

Lamason returned to operational flying in December 1943, commanding a squadron converting to the Avro Lancaster bomber. A crew of seven manned these, and he hand-picked his crew; interestingly, all but one held commissions. They flew together for 200 training and operational hours, and 15 missions, before the night of 7/8 June 1944, when their aircraft was shot down by a Messerschmitt 110 during a raid on a rail yard near Paris.

Evasive action meant that the bailing out took place at low altitude, and the mid-upper gunner had his parachute fail to open; the tail gunner was killed in the ME110’s attack. Of the five crew who survived the crash, three returned successfully to England through the French Resistance channels, but Lamason and his navigator were hidden by brave French families, until eventually betrayed and taken to Gestapo Headquarters in Paris.

Lamason did not talk about his experiences until late in his life, and Pedersen and her researchers have added to his rather reticent account by citing other sources. These include the documentary film “The Lost Airmen of Buchenwald” by Mike Dorsey, a grandson of one of the Canadian airmen among the 168, and “Betrayed: Secrecy, Lies and Consequences” by Frederic H. Martini (Martini, New York 2017), the son of an American airman in the group. I recommend both these sources.

With the Nazis’ desperation following the Normandy landings just a few days before Lamason’s and his crew’s raid, the airmen were categorized as terrorflieger, or “terror fliers” and regarded as “police prisoners” rather than prisoners of war, and the Geneva Convention was ignored. After eighteen days in the notorious Fresnes Prison, transport in cattle cars under appalling conditions, from 15 August 1944, took the 168 Allied airmen, comprising 82 Americans, 9 Australians, 48 British, 26 Canadians, 1 Jamaican, and 2 New Zealanders to an undisclosed destination.

This was Buchenwald Concentration Camp, near Weimar, and the book’s account is harrowing. Lamason decided that he was the senior officer in the group, and organized them in military rather than prisoner formation; they marched, saluted, and insisted upon rights under the Geneva Convention, whereby no help to the German war industry could be considered. This, on several occasions, led to confrontations with execution squads, but Lamason was able to somehow appeal to individual S.S. members, who ran the concentration camps, remaining humanity.

After several months, a smuggled note reached the Luftwaffe. The S.S. were held in contempt by the German armed forces, and, despite the “not to be transferred” status of the airmen’s incarceration, the “mistake” which had been made was rectified. The surviving 166 airmen were transferred to Stalag Luft III at Sagan in Poland. During the particularly bad winter of 1944/45, the camp was evacuated as Russian forces advanced, with a three-week march to another camp near Berlin. In April 1945 there was an extremely tense stand-off between Russian and American forces, with the Allied prisoners being potential hostages, but Lamason and his navigator managed to arrive back in England in May. Despite the “unofficial” nature of the Buchenwald airmen, a New Zealand Press Association newspaper article, dated 24 May 1945, had the headline, “New Zealander in Buchenwald.”

Impeccably researched, refreshingly free of typos and beautifully designed, Hilary Pedersen’s book is a great achievement, and a fitting memorial to a brave man. Despite the privations he suffered, Squadron Leader Phillip Lamason, DFC and Bar, returned to his wife to lead a full life on the land he loved, and lived to 93. Although he had no interest in returning to Europe, after his death his family made a pilgrimage to meet the families of French who had sheltered Lamason, and reading this part of the book is an emotional experience.

Portrait in Oil, The Autobiography of Nubar Gulbenkian »
« Motors Finest, Rolls-Royce and Bentley from the Seeger Collection