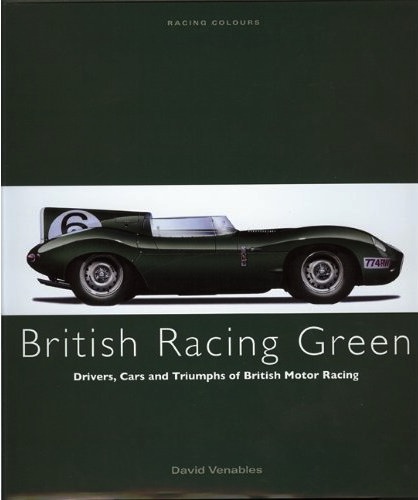 This is the first of what is currently (meaning late 2009) four books in this publisher’s “Racing Colours” series, edited by the renowned Karl Ludvigsen. Ludvigsen wrote the German Racing Silver and Italian Racing Red volumes in this series, while Venables, the assistant editor of the Vintage Sports Car Club Bulletin, authored the French Racing Blue and this volume, British Racing Green. Both men are pillars of the auto-journalist community, with many books and articles to their respective credit. The purpose of the series is to showcase the cars, circuits, drivers, and automakers of the great motor sporting countries—one per book.

Racing today is as multinational and multicultural as the world in which it takes place. In the car’s and racing’s early days, the world had not yet become a global village, and individual countries were still carving out their places in the world order. Technology was a key to the future and any display of prowess or supremacy was a matter of fiercely nationalistic pride and political importance.

As early as 1900 the organizers of the Gordon Bennett, as it has become commonly known—but was then correctly the Coupé International which enthusiast Gordon Bennett sponsored by way of his ownership of the New York Times Herald and its sister Paris, France edition, thus becoming by 1903 the Gordon Bennett Coupé Internaltionale—decreed distinctive official team colors for the various participating countries. The very next year this concept fell into disarray. It did not become truly established until the 1921 French GP at Le Mans and even then it applied only to factory teams at the GP level.

This book starts off with a map of the British Isles that shows the locations of 30 manufacturers and nine racetracks, with a brief summary of the origins of organized racing in Europe and the allocation of racing colors. It then presents its topic organized by marque, one per chapter, for the proverbial “household” names. Several of the “lesser” marques are bundled together, ending with a four-page chapter bringing up the rear of the field, the also-rans. The order in which the marques are presented is not explained nor is it self-evident (and, except to the arch defender of a particular marque, it really shouldn’t matter). They appear to be in roughly chronological order of their having established their name in racing, although the inevitable overlap in time would make any attempt at ordering them as arbitrary as doing it any other way.

At any rate, each entry describes the basic arc of history for the subject firm through 2007, enumerating racing highlights and technical/developmental details of especially significant cars. Sidebars contain driver profiles and track analyses of four circuits. The numerous photos (b/w and color; many sourced from the bottomless archive of the Ludvigsen Library) are supplemented by ten specially-commissioned color drawings from Steve Anderson of cars in profile, along with two unattributed period cutaway drawings of a Sunbeam and an ERA. Even the oldest period photos are quite sharp and show good detail. There is a short bibliography and a thorough index.

Copyright 2009, Sabu Advani (speedreaders.info), rewritten and adapted from a review first published in the November/December 2009 issue of The Flying Lady, the periodical of the Rolls-Royce Owners’ Club (RROC/USA).