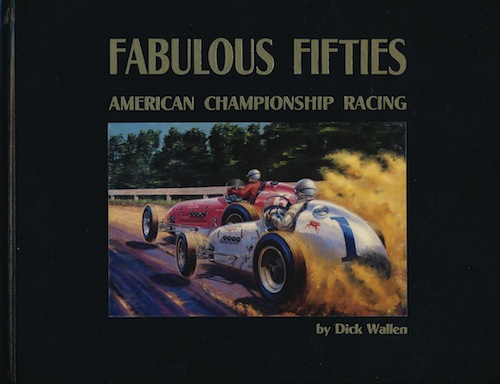 “Probably half of the drivers running today at Indianapolis could very well have fit into that are. The rest of them I’m reasonably certain would not have. Any of the Unsers could have done it back then. Mario. I think it’s a matter of desire. How badly do you want to do it? Back in our days there wasn’t any glamour, there wasn’t the television, there wasn’t the money, so you drove race cars for the sheer thrill of doing it.”

Once upon a time, before the advent of the Internet and the World Wide Web created a seismic shock that bumped the paradigm of research that dated back to the Middle Ages and whose last big thump had been during the 19th Century due to the grinding of the tectonic plates of academia inventing the “journal article,” research usually meant the toil and drudgery of sorting through original documents and related materials as well as reading other primary and secondary sources such as books.

Lots of books. Lots and lots of books. Research was time-consuming and, more often than not, usually a solitary pursuit, yet one that took place within a larger community that was in constant motion in the quest for knowledge. Today, one need only to have access to the ether and a search engine to find links to what seems to be no end of information. Alas, sad to say, raw information is not the same as knowledge. While blindingly obvious, some seem to resist this truism.

For those hardy few who strove to be automotive competition historians in the not too distant past, information that is at one’s fingertips today was often either not readily available or readily accessible. One was required to dig and dig and dig and then assemble, correlate, collate, and often interpret to the best of one’s ability what one found. Basic information was often lacking, meaning that one often had to expend time and effort to assemble even the most rudimentary information: seemingly simple things such as box scores for races that provided complete results were usually not only few and far between, but even when available were usually buried within the pages of some journals or books elsewhere.

In general, one traveled to the information, not the other way around.

If one was interested in big-name Grand Prix or Formula One racing, or the 500-mile Memorial Day race at Indianapolis, information was usually more or less readily available if one was a reasonably capable researcher, especially for the post-World War II years. But if wanted to work on, say, US National Championship events, you were pretty much out of luck unless you had access to specialized sources. Dr. Paul Sheldon of the Formula One Register Record Book wrote, “It may be fairly said that for every 999 words written about the Indianapolis 500 mile race, none are written about the others in the Championship.” (Shipley, West Yorkshire: St. Leonards Press, 1990, 9)

Then, seemingly from out of the sky, fell Dick Wallen’s Fabulous Fifties: American Championship Racing.

Although the contents were something of a mish-mash of chapters covering topics ranging from tracks to car owners to “minor leagues” as well as incorporating biographies of Jimmy Bryan and Tony Bettenhausen along with a chapter devoted to listing all the drivers who competed in an event in the national championship from the 1950–1959 seasons, the heart of the book were the chapters on the individual seasons and the relevant statistics and box scores for those seasons. Plus, of course, the photographs, of which there are hundreds. With few exceptions, the photos are not only superbly reproduced but placed where they should be, supporting the narrative. The layout and design, credited to Wallen himself, are outstanding: printed on heavy slick paper, the landscape format is a great way to show off the superb selection of photos whose reproduction puts the vast majority of other books to shame.

All ten of the chapters covering the era’s seasons were written by Bob Schilling, a California school teacher whose thesis for his MA was a biography of Rex Mays. Each race during a season is given its own individual race report, often accompanied by a number of photographs of the event. While Schilling’s narrative certainly wavers at times for various reasons, what is evident with careful reading and consideration of the material is that Schilling is actually imparting a large measure of the knowledge he has developed regarding this era. Remarkably, to this day there is still no better narrative of the A.A.A. and USAC national championships from the 1950 to 1959 seasons to be found. Nor was there one prior to Schilling, for that matter.

Although his statistics and box scores were later put on the Internet, the material that the late Phil Harms provided for this book were a revelation for those interested in such data. While data is too often seen as an end onto itself, especially in the “Age of Information” that the Internet and the www seem to have fostered, linking the Harms box scores with Schilling’s narrative provides a more complete, rounded understanding of the events that took place on the track. The amount of research and work that Harms put into developing this material is simply staggering. It took years upon years to track down this material, check and double-check it, find and correct the inevitable errors, and then put it into a coherent, readable format. Those folks who today simply copy his work and use it for their own websites or publications owe him a debt of gratitude, not to mention proper credit!

Anyone with an interest in this fascinating era of American racing who doesn’t yet have a copy of Fabulous Fifties: American Championship Racing on the bookshelf should remedy that posthaste. And thank your lucky star—aka Joe Freeman of Racemaker Press— for not only continuing to keep this book available more than 20 years after its publication but at an absurdly low price. The same is true for the several Wallen books that followed this one; and while not all are as thorough they’re all worth having.

The American Clipper Ship, 1845–1920 »
« The Woman Owner-Driver: The Complete Guide for Lady Motorists