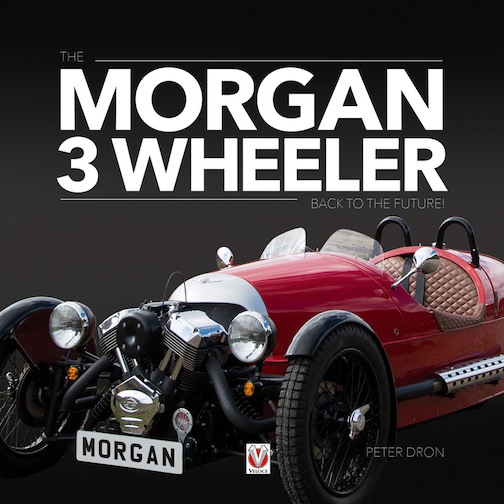 Even the most powerful cars these days are easy to drive. They don’t generally become challenging or even interesting until they are travelling at speeds way above those permitted by law. If you like the idea of minimalism in cars as an antidote to all that high tech overkill, then the M3W might fit the bill.

Due to ever increasing emissions regulations Morgan can no longer sell their classic sports cars in the United States. Rather than pull out of this lucrative market altogether, the Morgan Company took a gamble in buying the rights to a beautifully built three wheeler made by a small Washington State company called Liberty Motors that was inspired by the classic V Twin Morgan trikes of the 1920s and ‘30s. This book tells the story of how Morgan came full circle in returning to their roots bringing their new three wheeler to mainstream production on a tiny budget.

Anyone who grew up reading car magazines in the 1970 and 1980s will recognize the author for his work on (what was then) Motor Magazine as well as the excellent but sadly fairly short-lived magazine Fast Lane as well as his regular contributions to the Daily Telegraph and his activities on track. Peter is also an owner of a new Morgan Three Wheeler (or “five speed,” M3W aficionados refer to their cars by the number of forward gears). In this book Dron draws on his long experience in motoring journalism together with the sort of insight that only comes from actually living with a car, to give the full development history of the modern Morgan Three Wheeler as well as detailed advice on what the car is like to drive and own. 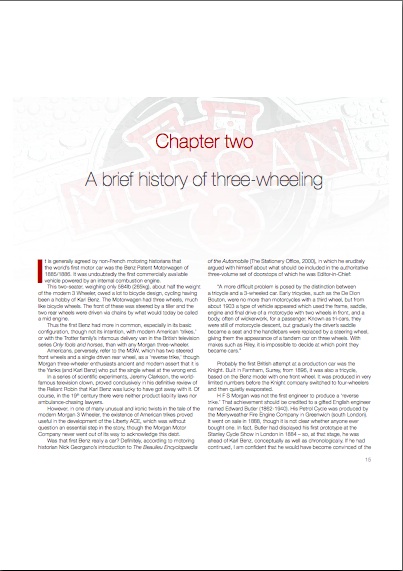 The book covers the far from easy gestation of the vehicle and the reasons why Morgan decided to relaunch the Three Wheeler before providing an in-depth analysis of the technical details of the vehicle from the powertrain through to the body, suspension and frame before covering recent improvements to the vehicle and giving in-depth driving impressions, advice for potential owners, and a magazine-style road test.

It is the story of bringing the new Three Wheeler to market that arguably provides the most interesting part of the book. There have been several very high-quality three wheelers built by tiny manufacturers inspired by the classic Morgan V Twin trikes, most notably the Moto Guzzi-powered Tri-King and the beautifully made Harley Davidson-powered Liberty Ace, built by hand in Washington State by an engineer called Pete Larson. Dron provides a brief history of the original Morgan Three Wheelers before recounting how, back in the early noughties, Charles Morgan and other directors of the Morgan Car Company were presented with a Tri-King to drive and later an Ace but were originally far from convinced that bringing back the concept was a viable idea. Dron recounts the various debates that went on within the Morgan Company over whether to produce this car, the politics and personalities involved, as well as a thorough look at the Liberty Ace that was to be the basis for the new car with Morgan doing a deal with Larson to acquire the rights to build the car under the Morgan name and thereby allowing them to maintain a presence in the US market where a three wheeler can be marketed as a motorcycle and so avoid the stringent safety and emission legislation that is required for cars. 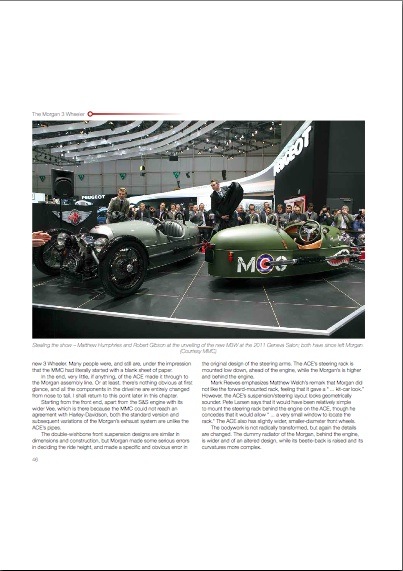 This is an intense and absorbing story as the resulting Morgan car ended up being very different to Pete Larson’s Ace, with Morgan Company ending up totally redesigning the car for more automated production (Dron states that the Morgan Three Wheeler is more hand-assembled than hand-made). The book details the major redesign of the body in-house by computer aided design together with the struggle to find a power unit for the vehicle after Harley Davidson refused to provide engines for the project with Morgan eventually turning to US aftermarket engine builder S&S to supply the 2L V Twin power unit and mating it to an adapted Mazda MX5 transmission. Some might find the book a little heavy on the technical side with its heavy focus on specs and builds but this is a book that is designed to appeal to the hardcore enthusiast and also, I would argue, to those who are contemplating the purchase of an M3W. Such people will want such detailed information and they will find it here.

They will also get a great deal of benefit from the detailed road test Dron offers. It is laid out in the style of a magazine road test (in the traditional Autocar style with star ratings) with sections divided into performance, build, ride comfort, instrumentation, brakes, finish and handling to name but a few. This test is solid and objective and presents both the car’s strengths (performance and handling) as well as areas that come in for criticism such as finish and build quality and servicing, the latter facing sharp criticism, which is a surprise for a vehicle that appears so simple on the surface. The lack of rose-tinted spectacles, the honest detailing of the car’s faults, as well as detailed information on how Morgan has addressed early feedback from owners and carried out improvements will all be of great interest to potential buyers as well as those who are already owners and want “the book of the car.”

The book is published by Veloce and is an example of the usual high standards of this publishing house. It is printed in hardcover coffee table format on glossy paper and contains many color photographs (beautifully reproduced and many of them full-page) as well as b/w photos of the early cars as well as several technical sketches and diagrams. The book is not cheap at $69.95/£40, but given the fact that it is so nicely produced and on a specialist subject (and probably has a relatively low print run) one cannot begrudge the price.