Against Death and Time: One Fatal Season in Racing’s Glory Years 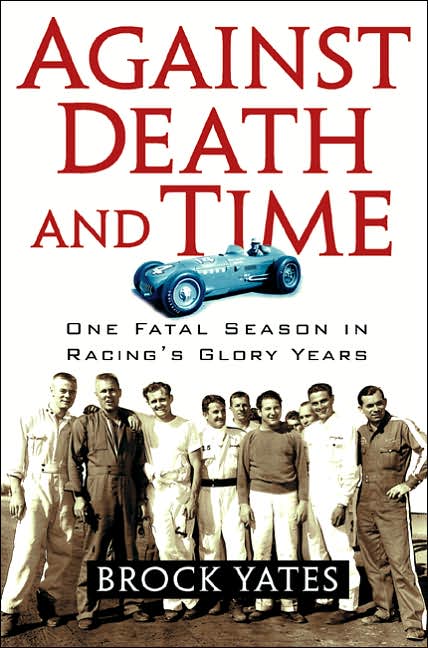 Against Death and Time is, á la Yates, well written and highly readable. It recounts all the tragic events of 1955 that had such a tremendous impact on motorsports for years to follow.

Racers, even the purely amateur sporting set, recognize there are certain dangers inherent in the practice of their chosen activity. Normally the dangers involve the racers or their machines as courses and tracks are surely devised to offer spectators, and the crewing team members, safety from the gasoline hauling, speeding missiles. Yet, in spite of ever-increasing precautions and safety devices, the fatal accident(s) occur even into the millennium. Sometimes, despite those best laid plans, events conspire—and so it was in 1955.

Early in the year two drivers, a world champ and an Indy 500 winner respectively, died in the spring—Alberto Ascari while running at the Monza Autodrome outside Milan and, just days later, Bill Vukovich during the Indy 500. Come summer, this time in France, during Le Mans—miscalculations, accidents and cars off the track into the crowd with nearly 100 spectators killed.

And then, only one—but that one was so well-known with such a high profile that the world would hear of it. James Dean had wrapped the film he was working on so the studio could no longer forbid him to compete and he was enroute to the road race… but you know the story. And if you don’t, the pages of Yates’ book are a good place to start. Yates writes of all these events in a yarn-spinnin’ style that gives background and entertains while informing.

And, of course, all these news making “incidents” only fed the anti-racing press giving them new arguments to fuel their rhetoric. From the racing point of view, it didn’t help that one of those against was pretty high profile himself. William Randolph Hearst was the owner and publisher of a major circulation newspaper, The Los Angeles Examiner, and often shared his views in print.

Yates tells the story well making one wonder yet again why those books used to teach history are so dry and off-putting. Say, maybe if you share this book with a young person, he or she will find history an appealing subject. But do read it yourself before passing it along.