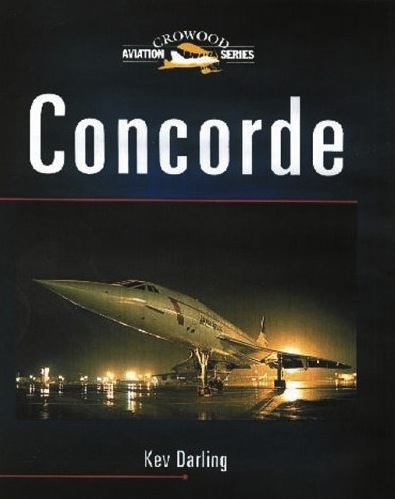 With over 20 years of RAF engineering background and over 20 aviation books since 1986 under his belt, author Darling knows his way around an aircraft. Since seeing the first production examples being built at Filton he’s kept an eye on this plane and harbored a desire to learn more about it. Illustrated with hundreds of photos he presents here the story of the world’s only successful supersonic airliner (1976–2003) from initial planning up to the aircraft’s only, but fatal, crash in 2000 and the immediate aftermath. The focus is on the type’s development, construction, and operating principles not its airline service life or lifestyle issues.

Readers already familiar with other Concorde literature will be anxious to learn what distinguishes this book: alternate SST proposals; in-flight photos of Avro Vulcan bomber XA903 with a partial Concorde nacelle mounted to its belly; photos of the Pepsi plane on the ground, nose down and revealing its [unpainted!] visor; photos of planes impounded after the crash; voice recorder transcripts of the 47 minutes prior to the crash; and much of the data in the Appendices.

Readers new to the subject will best appreciate the magnitude of the Concorde project by recalling that planning for it began way back in 1956, an era in which a commercial flight from London to New York took 18 hours. By the time Concorde finally entered service, 20 years later, airliners like the Boeing 707 had already whittled that time down considerably but the fastest time on that route ever recorded by Concorde—2:52:59 hrs—has remained untouchable by civilian aircraft to this day.

Darling begins with a prehistory going back to the German World War Two military efforts; describes developments in the areas of swept wings, jets, and nose-wheel undercarriages (the latter definitely not, to the layperson, an obvious aspect of aircraft evolution); and the founding of the Supersonic Transport Aircraft Committee and the overall political climate. If there is a shortcoming in this exposition it is that non-British developments are not treated with the same level of magnification. This is surely not a matter of bias but economy in book writing. Alternate British proposals by English Electric, Handley Page, Armstrong & Whitworth are shown (the latter two will make the reader wonder how they ever advanced to this stage), and by the time we get to the Bristol Type 223 and the similar French Sud Aviation Super Caravelle we see Concorde’s DNA. There are many photos in this section of military aircraft testing Concorde-specific kit and materials.

From test aircraft and construction details of specific components to nose operation and cabin pressurization, and from crew training to flight deck layout the book covers the key aspects of its topic in good detail and in fluid prose. A short chapter covers the American SST program (but with minimal attention to the Lockheed proposal) and a much longer one the Russian TU-144. In the interest of the reader who doesn’t already know the details about the fatal crash in Paris it would have been advisable if that chapter disclosed right away that the crash was caused by foreign object debris on the runway (as opposed to a self-caused failure of the aircraft) instead of burying this important a fact in pages and pages of accident reports. A closing chapter looks at the future of SST.

No one book does everything but this one is a solid offering that can stand on its own. There are quite a few detail drawings. Photos are plentiful, with detailed captions, and list photo credits. Sidebars contain useful data such as design costs, lists of people on committees or crews, type certification air data sheet, airline orders etc. The color photos are bundled into a 4-page center section.

Appended are a spec/data sheet, a three-page list of Concorde incidents (mostly tire failures!), Concorde and TU-144 fleet details on separate lists (by number, registration, series, operator, first flight, final disposition), and a short Bibliography. The Index is brief but sufficient. It handles subentries in an efficient but unorthodox way; once you figure it out it all makes sense—no point describing it here.

Concorde: A Photographic History »
« Vulcan Units of the Cold War